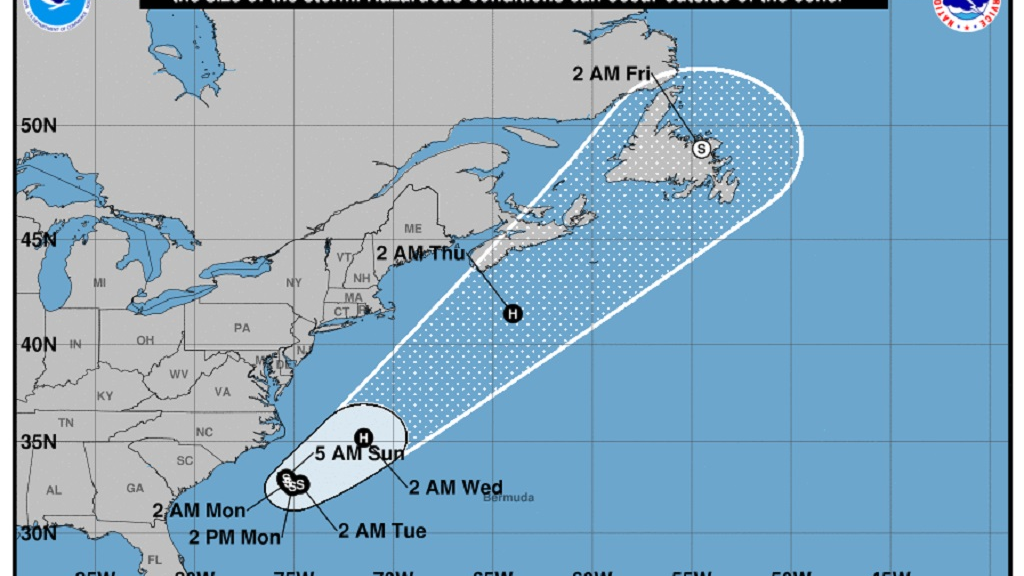 Tropical Storm Chris has formed in the Atlantic, the third named storm of the 2018 hurricane season.
The National Hurricane Center in Miami said Sunday that the storm was likely to strengthen. As of 5 a.m. EDT, its maximum sustained winds were clocked at 40 mph (65 kph).

The storm was centered about 150 miles (245 kilometers) south of Cape Hatteras, North Carolina.  The hurricane center said the storm was expected to generate swells that would increase in intensity along the North Carolina and mid-Atlantic coasts.

Meanwhile, Tropical Storm Beryl - the second named storm of this season - is expected to dump heavy rain over the Lesser Antilles at the end of the weekend.

Tropical Storm Beryl is moving rapidly westward toward the Lesser Antilles at the eastern entrance of the Caribbean Sea.

The storm that had been the Atlantic season's first hurricane has been losing power, but residents on islands hit hard by storms last year stocked up on food and water Saturday and prepared for possible damaging winds, rains and waves.

A tropical storm warning is up on Guadeloupe and Dominica, while a tropical storm watch has been issued for the French Caribbean territories of Martinique, St. Martin and St. Barts as well as St. Maarten, Barbados, St. Lucia, Saba and St. Eustatius.

Puerto Rico, which was devastated by Hurricane Maria in September, remains under a state of emergency.

State of emergency, curfew for Dominica ahead of Tropical Storm Beryl

The Koffee’s hot this summer with Thom Browne, Highsnobiety