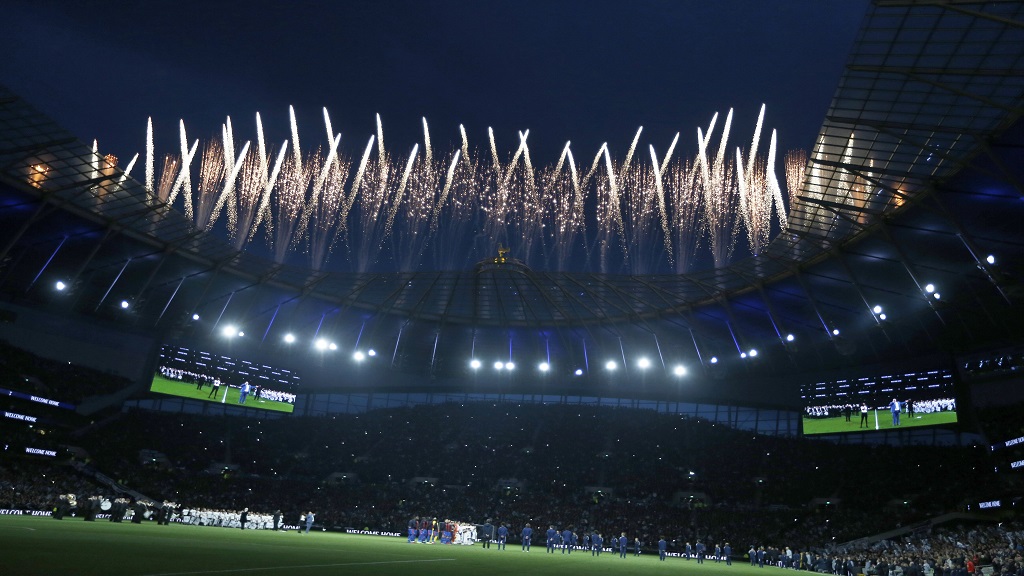 Fireworks explode above the stadium as the teams stand on the pitch before the start of the English Premier League football match between Tottenham Hotspur and Crystal Palace, the first Premiership match at the new Tottenham Hotspur stadium in London, Wednesday, April 3, 2019.

Setting a world record for profit by a football team while keeping player costs down, Tottenham's financial gamble is paying off — for now.

Tottenham moved back into third place in the Premier League on Wednesday when their new 1-billion pound ($1.3 billion) stadium opened with a 2-0 victory over Crystal Palace.

Tottenham have qualified for three consecutive Champions League seasons while generating less income than rivals for the Premier League's top four places. But Spurs have also spent far less on their squad, according to an Associated Press analysis of financial records.

Tottenham's turnover of 381 million pounds ($500 million) and wage bill of 148 million pounds ($194 million) was significantly surpassed in the last financial year by the two teams higher in the league — Manchester City and Liverpool — and the three teams below — Arsenal, Chelsea and Manchester United. Those five teams also spent more on agents, who facilitate transfers and contracts negotiations with existing players.

While four of the top six have won the Premier League trophy during the last 15 years, Spurs have not won the English title since 1961 or any competition since the 2008 League Cup.

"When I took over the club (in 2001), Tottenham was not a club that was a regular European challenger," Tottenham chairman Daniel Levy said Tuesday. "Clearly, we are now, and my dream is obviously to win. We want to win and winning is both on the pitch and off the pitch. So we are going to keep going until we get both right."

Tottenham are paying for their 62,062-capacity stadium with a 637-million pound (currently $828 million) credit facility that has an April 2022 expiration.

While Tottenham were building a new stadium on the site of their old 36,310-seat White Hart Lane, the team played at 90,000-capacity Wembley, leading home league attendance to more than double from 601,000 to 1.29 million. That sent matchday revenue soaring from 45.3 million pounds ($59 million) in the final season at White Hart Lane to 70.95 million pounds ($93 million) in the full campaign at Wembley.

In order of the current Premier League standings, here is a look at the key financial results from 2017-18 based on accounts published in recent months: