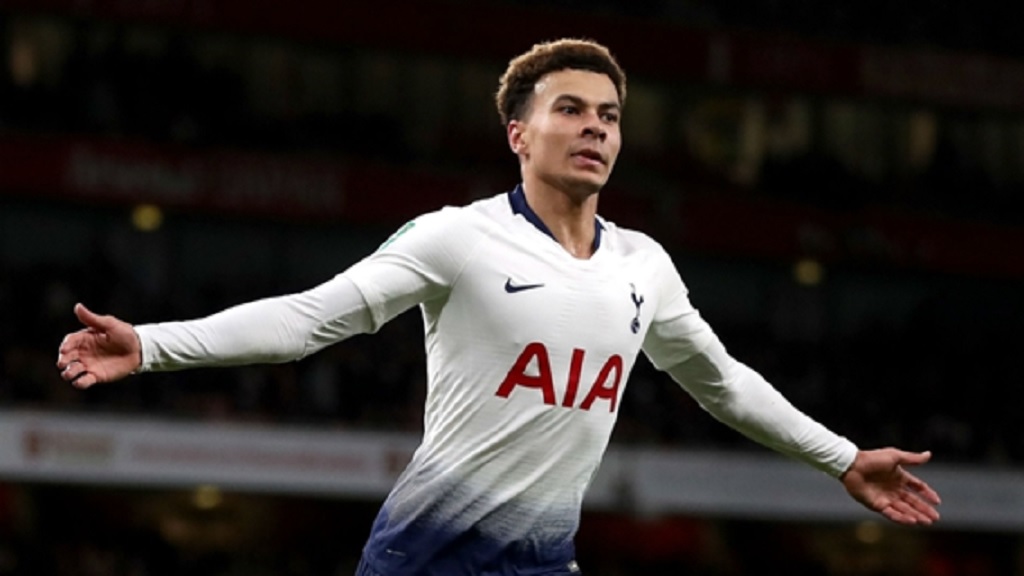 Dele Alli scored a brilliant chip as Tottenham gained vengeance for their Premier League defeat at Arsenal earlier this month by claiming a 2-0 EFL Cup quarter-final win at Emirates Stadium.

Mauricio Pochettino's team went down 4-2 when the sides met in a fiery north London derby on December 2, but Alli's impudent finish in the 59th minute added to Son Heung-min's opener to send Spurs into the final four for the first time since 2014-15.

A banana was thrown on the pitch after Pierre-Emerick Aubameyang scored a penalty in the teams' previous encounter and on Wednesday Alli was hit by a bottle thrown from the stands, responding with a '2-0' gesture to the fans.

Unai Emery - who left Mesut Ozil out entirely for "tactical reasons" - may step up his interest in defensive reinforcements after his makeshift backline was twice punished by clinical Tottenham counter-attacks in their second straight defeat.

Henrikh Mkhitaryan was unable to beat Paulo Gazzaniga from 12 yards when one on one and Son punished him in the 20th minute, curling past Petr Cech after Granit Xhaka – deployed at centre-back – played him onside.

Moussa Sissoko contrived to blaze over at the end of a rapid Tottenham break that followed Lucas Moura's tackle on Mkhitaryan, but Gazzaniga kept the visitors ahead by tipping Aaron Ramsey's shot against the upright two minutes before the break on the Welshman's 350th Arsenal appearance.

Emery switched to a back three with the introduction of Laurent Koscielny at half-time but the centre-back – still working his way back to full fitness after an Achilles rupture in May – played Alli onside and the 22-year-old poked a delightful finish past a stunned Cech.

Alexandre Lacazette hit the post soon after replacing Alex Iwobi, while Aubameyang saw a cross from the left hit the bar after Alli appeared to be struck by a bottle thrown from the crowd.

Arsenal were unable to find a way back into the game, with Gazzaniga not having to make another save before the final whistle.

What does it mean? Pochettino means business

Pochettino clearly wants to win the first trophy of his Tottenham career. Having joked that Harry Redknapp's triumph in reality TV show 'I'm a Celebrity … Get Me Out of Here!' represented silverware for Spurs, the manager said in his pre-match news conference that any title would show the "value" of the work being done at Spurs.

Although he left Harry Kane out of his starting line-up, the only high-profile omission in his XI, he sent the England star on with over 30 minutes remaining and just 66 seconds later he supplied the assist for Alli's goal.

Alli gets all over

Playing behind Son, Alli proved full of energy across the 90 minutes. He worked extremely hard defensively, created two chances for team-mates and scored a sensational goal to seal Spurs' victory. After the unsavoury incident in which he was hit with a bottle, he was involved in an 85th-minute scuffle with Xhaka over time wasting that resulted in a booking.

Arsenal were on top during the early exchanges but Mkhitaryan sent a header wide in the second minute before showing a lack of confidence when he only had Gazzaniga to beat in the 12th minute. Had he scored either chance the game could have followed a very different path, and he was replaced at half-time – perhaps due to the challenge by Lucas.

Arsenal welcome Burnley to Emirates Stadium in the Premier League's early kick-off on Saturday, while Tottenham head to Everton a day later.

Tottenham scrape to another win in English Premier League