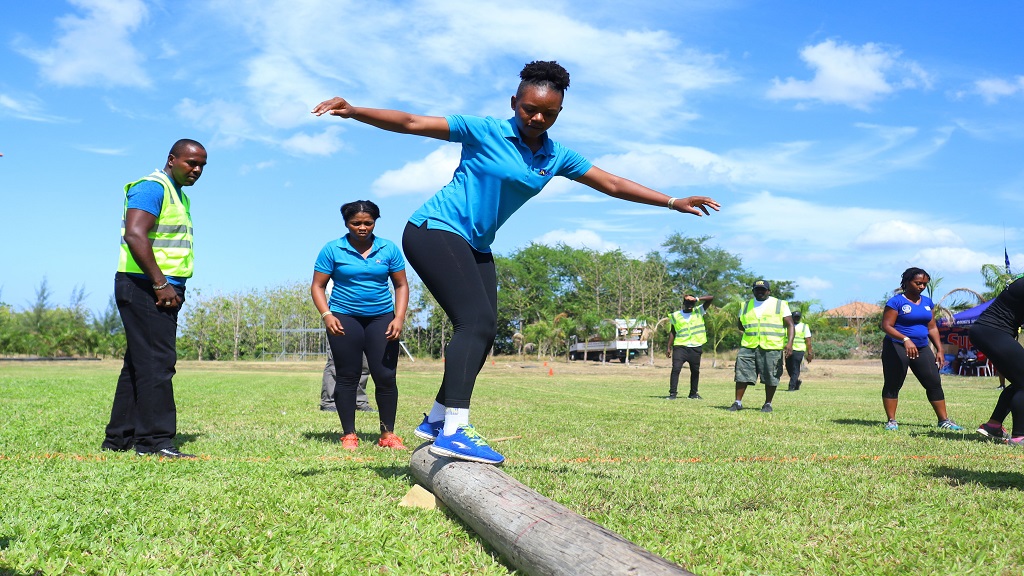 A member of the JN Bank Channels Gladiators negotiates the beam in the Giddy Challenge during the Guardsman Games Power Games eliminations on Saturday, June 29, 2019.

Twenty-two teams pushed themselves beyond physical and mental limits, showcasing skill, grit and physical prowess to secure the 10 automatic spots to the finals of the Guardsman Games Power Games scheduled for Sunday, July 28, 2019 at the Hope Zoo.

According to Chairman of the Guardsman Games and director of communications at Guardsman Foundation, Lieutenant Commander George Overton, the vibrant teams of the Power Games Eliminations led to a fulfilling day of athleticism.

“The teams came out very competitive this year. They were more aware about what they are about. I believe with the lead time and the preparation that we had, they were also well prepared,” Lieutenant Commander Overton shared. 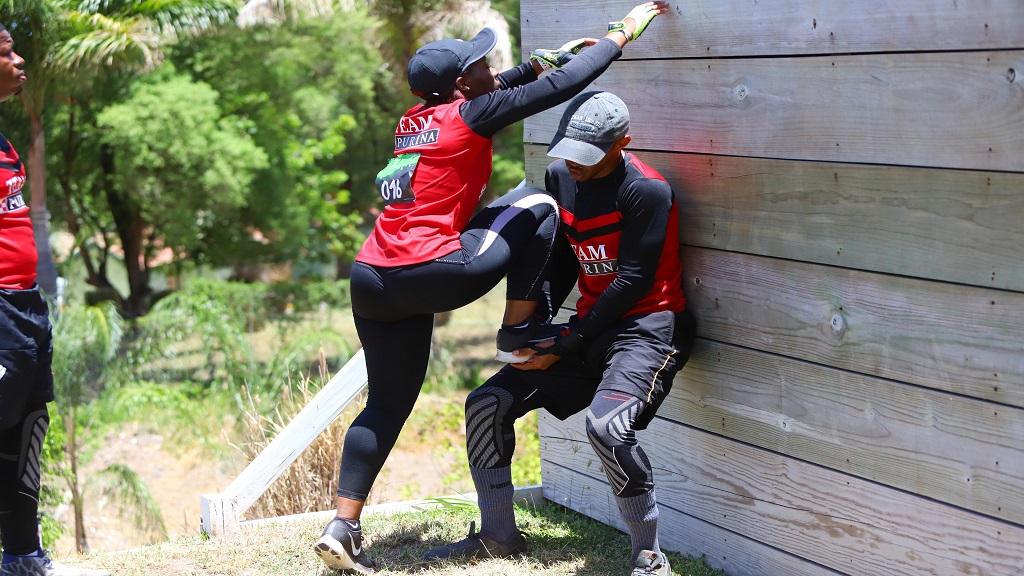 Defending champions and returning finalists Supligen Warriors shared that participation in the boot-camps were great preparation.

“It was good to attend the boot camps gave us an understanding of how the field is set out and the obstacles that were utilised,” stated Team Captain Vaughn Watson.

“Being able to use the obstacle course give us a chance to see what’s going to happen. Every week the organisers add something new to the course. So, each week you get to challenge yourselves and feel how the games will be. They will change it up in the finale as they always do, but you still will know what you’re getting yourself into.”

However, qualifier JABBFA Legionnaires presented a different perspective having been only made aware of the competition only two days prior. 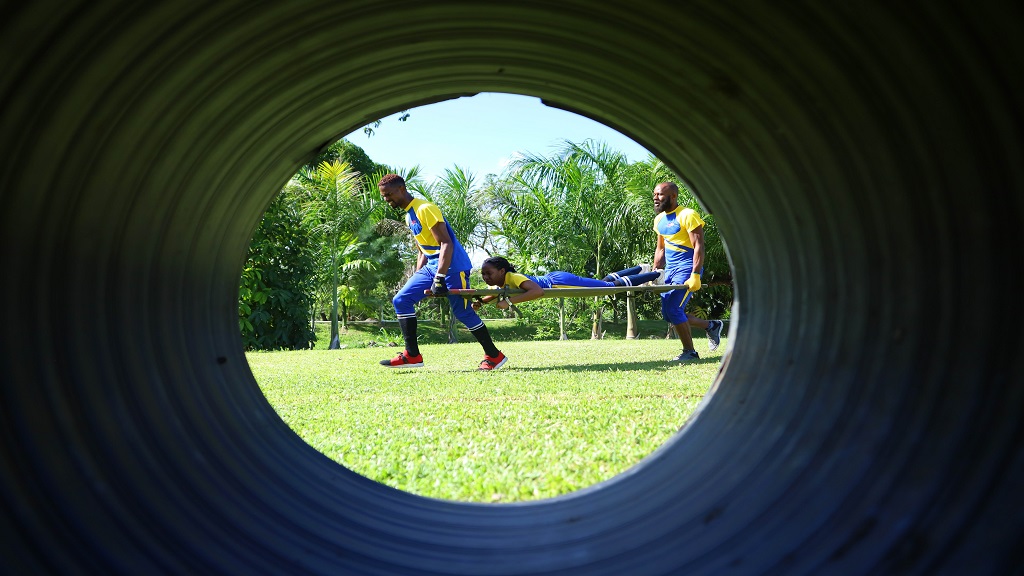 “This is our first time entering,” noted Team Captain Jamel Jackson. “We heard about the competition two days ago and we are always training, so we just stepped up to the plate and here we are.”

With no boot-camp training under their belt, teamwork played a huge factor in their favourable result.

“Basically, teamwork played a big part in our success today. Teamwork is definitely why we placed second today. With a few weeks before the finals, we are going to go back to the drawing board, fine-tune a few things and we expect to come out victorious,” concluded Jackson.

The 22 teams showed up for the Power Games Eliminations consisting of four challenges: The Stretcher Race; Giddy Beams; Drum Bridge; and an Obstacle Course with only 12 elements.

Though not timed, the challenges were scored on placements; that is first place equals one point and penalties were awarded with one point each. Therefore, the 10 teams with the lowest scores would advance to the finals. 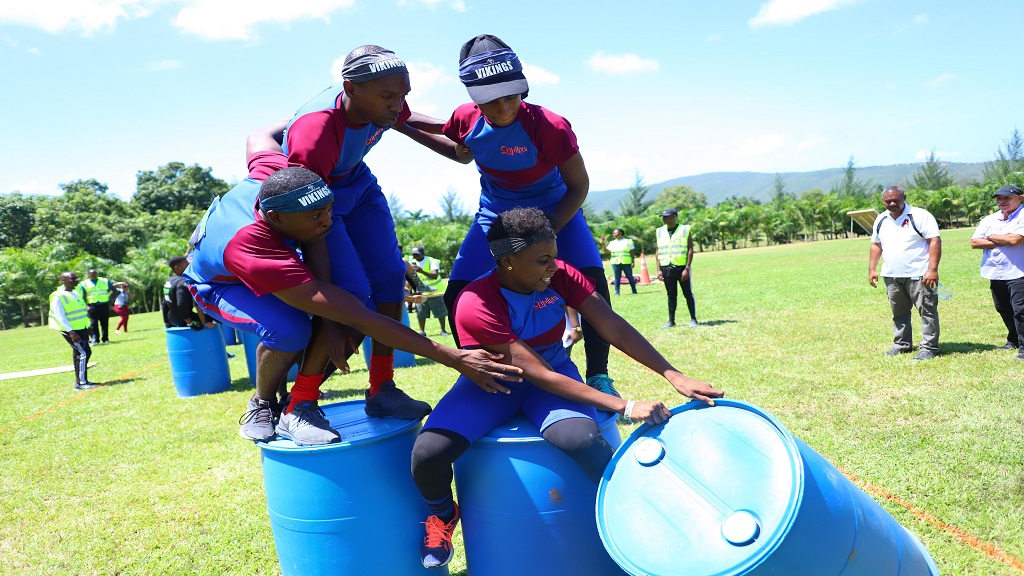 In the Stretcher Race, the teams of four (two men, two women) had to carry one member on the stretcher while the fourth team member carried the burden bag around the prescribed route and across the finish line. One penalty point was awarded each and every time the stretcher advanced without a “patient’ on board and the race was only considered complete when the last team member crossed the finish line. No member was able to go back to assist even after completing the race.

Under the watchful gaze of the marshals, patrons and the morning sun the 22 teams put their muscles and agility to the test. And after a few torn and broken stretchers and fallen “patients” throughout the six heats the leader board showed JABBFA Legionnaires, Supligen Warriors, Supligen Vikingz, Express Fitness, Nestle, and MegaStars with one point each.

Aptly titled the Giddy Challenge, team members had to navigate a beam after rotating around a pole 20 times, pivoted at the forehead, to then tag their teammate to do the same until all four members have completed a leg. Penalties incurred if a rotation was missed and if a member entered or exited partway on the beam.

Supligen Warriors and JABBFA Legionnaires showcased mind over matter as they incurred zero penalties and placed first in their respective heats. However, penalties struck LASCO Nutrify and Supligen Vikingz landing them with six points each; Express Fitness with seven points and Supligen G Force with eight points. 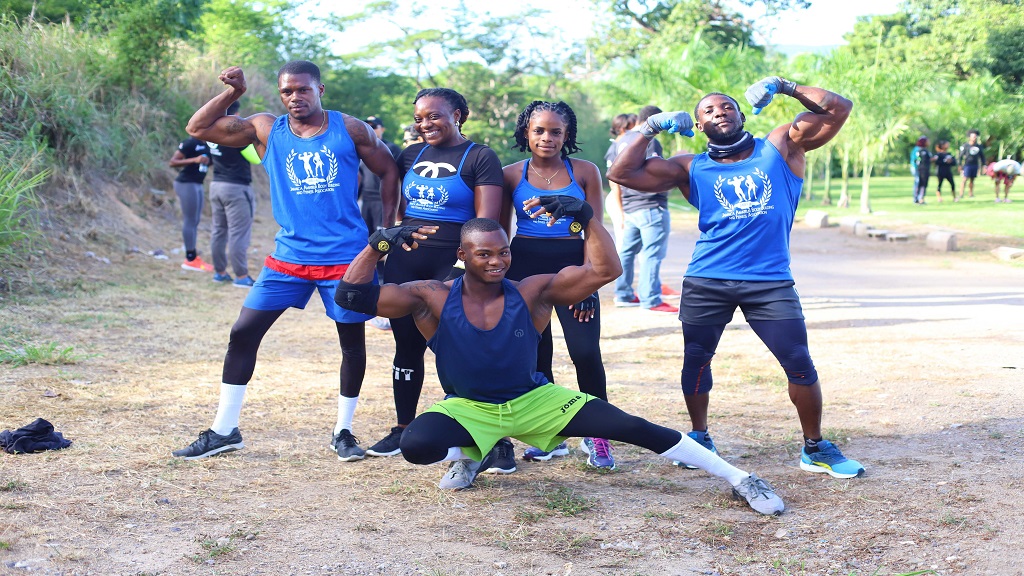 The Giddy Beams were quickly followed by the Drum Bridge Challenge where teams raced to use available equipment to cross an obstacle minefield. After the first heat, the teams had a chance to see the most efficient way to cross the course. The Armoured Avengers, Hyundai Warriors, JABBFA Legionnaires; JN Money Conquerors; Supligen Vikingz; and Puerto Seco Piranhas, took their respective heats with one point each.

With the final challenge came one last opportunity to secure an automatic qualifying spot.

The Obstacle Course consisted of only 12 elements required true team work as no team member could move ahead to the next obstacle without the entire team completing the current one.

Unfortunately, JN Bank Channels Gladiators became a casualty of the obstacle course as a team member was unable to complete the course, while JN Money Conquerors; Supligen Vikingz, Supligen Warriors, Express Fitness and LASCO Nutrify cleared it in fine style, landing one point each.

The defending champs Warriors, showed they were ready for all comers in two weeks’ time. Team Captain Vaughn Watson explained the formula behind their success.

“What we did was follow our coach Stokely Rose of Train Fit... do exactly what he said,” said Watson. “We put in the work, the training, dieting, teamwork, everything. We put everything together and it is a good mix. The scoreboard proves that.”

Wild vards are LASCO Nutrify, Supligen Rebels, PS Pirahnas, Express Fitness, Elite Wolfpack, LASCO Oats and MegaStars – they will compete to get the additional two for the finals.

Captain of LASCO Nutrify, Ryan Garvey commented on what it will take to take home a wildcard spot.

“We just barely missed out on two penalties on the giddy beam and that caused us a place, so we will go back after today and get focused.  Also to remember that it is important to finish first,  but to also  try to have a clean slate where we have no penalties. We have to up our game in terms of training inclusive of attending the bootcamps more regularly with the finals next month. The fact is, we may have to do the wild card event on the same day as the finals, so it's going to be double load or triple load like me who wants to do the OCR individual qualifier.”

On Sunday July 28, 2019 charity, athleticism and team spirit will converge in one space as the individual World Obstacle Course Race World Championship qualifying event kicks off at 6:00 am, followed by the LASCO Food Drink Tuff Kids Challenge at 11:00 a.m. then the Power Games Wild Card Playoff at 12:00 p.m., closing with the finals at 1:00 p.m.

Proceeds are in aid of the Bustamante Hospital for Children, Boys of Hope, a programme for troubled youth in the criminal justice system, and the Kind Hearts Foundation.