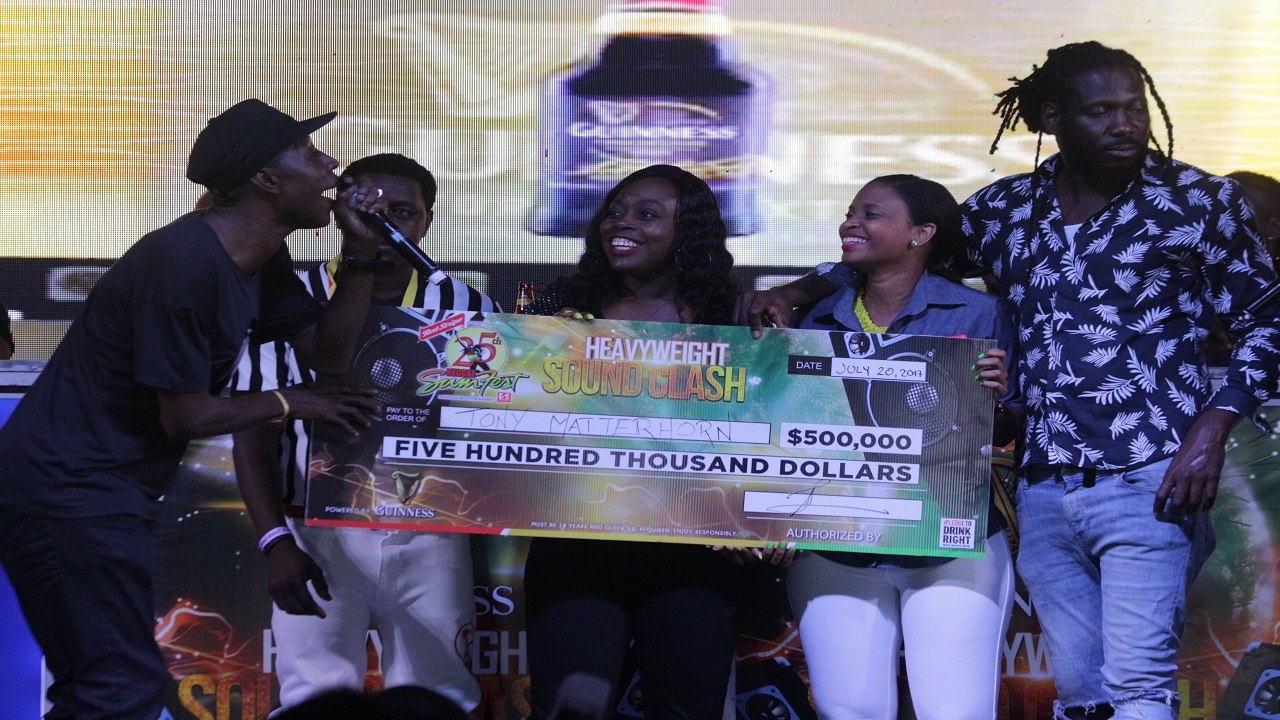 Tony Matterhorn (left) makes a point to someone (not pictured) as he collects his winning cheque after the Heavyweight Sound Clash at Pier One on Friday morning.

Perhaps it was a case of ‘he who laughs last, laughs the loudest’ at the end of the Heavyweight Sound Clash at the Pier One entertainment centre in Montego Bay on Friday morning.

Tony Matterhorn, the butt of jokes made by his sound system rivals and others throughout the contest, walked away with the $500,000 winning prize and shut up his detractors with a thought-provoking message.

“I will continue to take care of the child because I am a father,” Matterhorn said to applause in approval by the crowd.

The ace dancehall selector was being teased, as he has been for the last several weeks since the news broke, over the revelation that a young girl he thought was his biological child was in fact not fathered by him.

Almost everyone who touched the mic at the sound clash ridiculed him about his “jacket" baby.

It was No Limit selector Callum who first took a swipe at Matterhorn. With a burial song on the turntable, a voice read the ‘eulogy’ of the other sound systems in the clash, and for Matterhorn's, it said, he "died leaving behind his jacket".

Likkle Shabba of Soul Supreme jokingly said that Matterhorn cried after learning via paternity test that he wasn’t the child’s father, and asked members of the audience to console him.

Clearly having had enough, Matterhorn addressed the issue in the third round. He advised those ridiculing him to "come offa mi name now", then dropped Gregory Issac's Off A Mi Fender to ‘forwards’ from the crowd.

Even while collecting his prize for winning the event, Matterhorn came under scrutiny over the child.

But he stood tall at the end, owning up to the situation while vowing that he would continue to be a good father and keep taking care of the child.