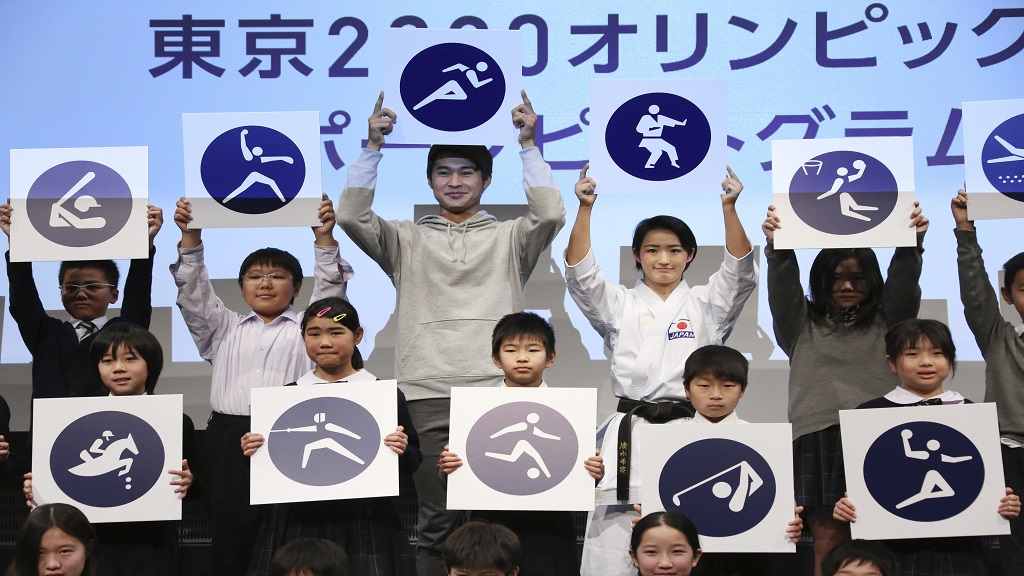 Organizers marked the milestone on Tuesday, unveiling the stylized pictogram figures for next year's Tokyo Olympics. The pictogram system was first used extensively in 1964 when the Japanese capital lasted hosted the Summer Olympics — just 19 years after the end of World War II.

A picture system to illustrate sports events was used in the 1936 Berlin Olympics, and 12 years later in London. Other Olympics sporadically used some drawings for the same purpose.

But the '64 Olympics originated the standardized symbols that have become familiar in every Olympics since then.

Japanese athletes posed with the pictograms and their designer, Masaaki Hiromura. Organizers also toured regions that will host Olympic events, including the area north of Tokyo that was devastated by a 2011 earthquake, tsunami, and resulting damage to nearby nuclear reactors.

"They are simple but yet dynamic," Hiromura said, explaining his designs to several hundred people. "These are pictograms that look like they are about to start moving."

Hiromura designed 50 pictograms for 33 sports. Some sports will use more than one pictogram when the Olympic open on July 24, 2020.

The '64 Tokyo Olympics came up with the pictograms, partly because the games were the first in Asia and held in a country where the language was inaccessible to many international visitors.

Unlike other recent Olympics, construction projects are largely on schedule. The new National Stadium, the centerpiece of the games, is to be completed by the by the end of the year at a cost estimated at $1.25 billion.

That's not to say these Olympics are problem free.

Costs continue to rise, although local organizers and the IOC say they are cutting costs — or at least slowing the rise.

As an example, last month organizers said the cost of the opening and closing ceremonies had risen by 40 percent compared with the forecast in 2013 when Tokyo was awarded the games.

Overall, Tokyo is spending at least $20 billion to host the Olympics. About 75 percent of this is public money, although costs are difficult to track with arguments over what are — and what are not — Olympic expenses. That figure is about three times larger than the bid forecast in 2013.

Tsunekazu Takeda, the president of the Japanese Olympic Committee and a powerful International Olympic Committee member, is also being investigated in a vote-buying scandal that may have helped Tokyo land the Olympics.

Takeda has denied wrongdoing and has not resigned from any of his positions with the IOC or in Japan.

He is up for re-election to the Japanese Olympic Committee this summer and could face pressure to step aside.