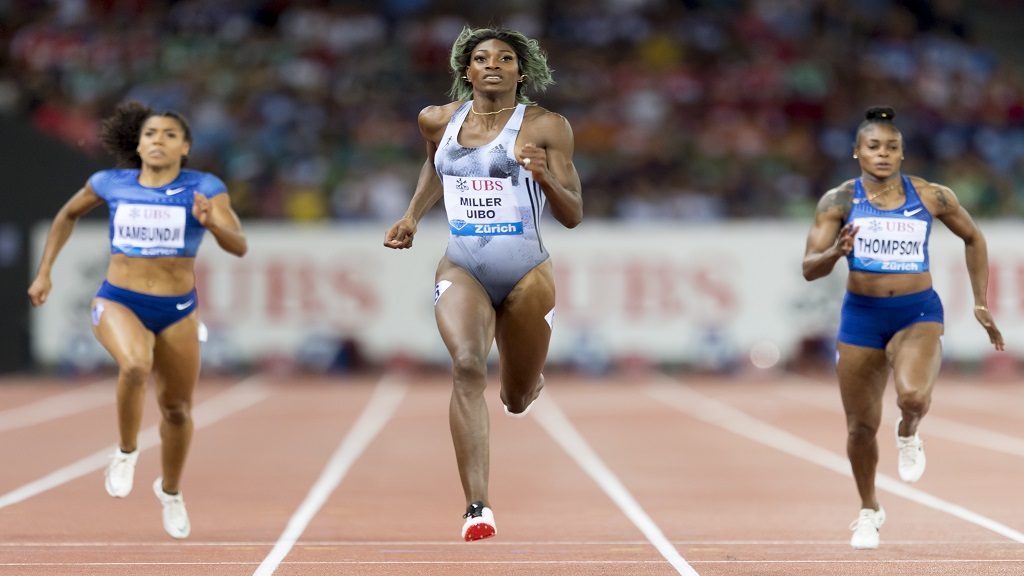 Shaunae Miller-Uibo from the Bahamas moves away from Jamaican Elaine Thompson (right) to win the women's 200m at the Weltklasse IAAF Diamond League at the Letzigrund Stadium in Zurich, Switzerland, Thursday, August 29, 2019.

Jamaica's double Olympic champion Elaine Thompson could only manage third place in the women's 200m   at the Weltklasse Zurich on Thursday as the first 16 IAAF Diamond League champions of 2019 were crowned.

The women's 200m, which was one of the key showdowns of the evening, produced the most fireworks, with Shaunae Miller-Uibo taking down one of the meeting’s strongest fields with an explosive 21.74 performance, the fastest in the world this year.

Entering the straight with a narrow lead, Miller-Uibo blasted away from European champion Dina Asher-Smith with about 40 metres to go to take the overwhelming victory with a Bahamian national and Diamond League record that elevated her to equal 11th on the all-time list.

Asher-Smith clocked 22.08 in second, a season’s best, with Thompson, the world leader coming in, a distant third in 22.44.

Noah Lyles inched past world champion Justin Gatlin about 15 metres from the finish to win the men's 100m in 9.98 to capture the third Diamond Trophy of his young career, his first in the shorter dash.

Running out of sight in lane nine, China's Xie Zhenye closed well to finish second in 10.04, just ahead of Blake and Gatlin, who clocked 10.07 and 10.08, respectively.

The young Cuban, who set the event alight last year, seemed stuck in the 8.30m range this season, until landing his winning leap in the opening round. It was Echavarria’s only measured leap of the evening, but still 45 centimetres better than South African Ruswahl Samaai and Tajay Gayle of Jamaica, who both reached 8.20m. The former took second on countback with an 8.17m second-best leap.

In the women's shot put, Danniel Thomas-Dodd of Jamaica finished sixth with 18.80m as Chinese star Gong Lijiao turned in a command performance to secure her third straight Diamond Trophy .

Chase Ealey of the US took the early lead, reaching a 19.68m career-best in the third round but Gong finally responded in the fourth, reaching 19.90m, a world lead, before extending it to 20.31m in the sixth. Her final round heave added eight centimetres to the meet record held by Natalia Lisovskaya since 1985.

The US pair ran nearly even through the first half of the race with local star Lea Sprunger, to their outside in lane seven, also running well. McLaughlin began to pull away midway through the final turn, entering the homestraight with a clear lead. She went on unchallenged to reach the line in 52.85, a season’s best.

Muhammad struggled over the waning stages, and was eventually passed by compatriot Shamier Little, who won the battle for third, 53.86 to 54.13.