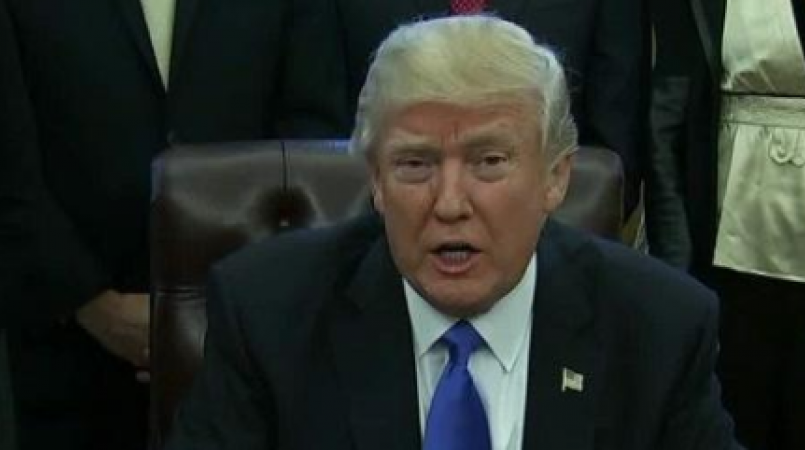 The Trump administration spent months hashing out new travel restrictions on more than half-dozen countries, determined to avoid the chaos that accompanied President Donald Trump's first travel ban. But critics say it's a mystery why some countries are included and they believe Venezuela and North Korea were added to provide legal and political cover for what they say remains a "Muslim ban."

The new restrictions covering citizens of Chad, Iran, Libya, North Korea, Somalia, Syria, and Yemen — and some Venezuelan government officials and their families — are to go into effect Oct. 18.

As for the previous version, which expired on Sunday, the Supreme Court on Monday announced it would cancel arguments scheduled for next month to give both sides time to consider the implications of the new one. They have until Oct. 5 to weigh in.

Trump's efforts to restrict entry into the U.S. have been the subject of lawsuits almost since the moment he announced the first travel ban in January, and the latest version is sure to attract new legal challenges — though experts are divided on how they might fare.

Avideh Moussavian, senior policy attorney at the National Immigration Law Center, said she saw little difference between the earlier bans and the new policy, despite the addition of two non-Muslim countries.

"What remains the same is the discriminatory core of these bans which were always designed to exclude Muslims from the United States," Moussavian said.

But Stephen Yale-Loehr, an immigration expert at Cornell University, said the latest version is narrower and better explained, including about how the government decided which countries to target.

"The third time may be the charm for President Trump's immigration travel ban," Yale-Loehr said.

Administration officials have stressed the latest version is the result of a lengthy process, and based on an objective assessment of each country's security situation and willingness to share information with the U.S.

The restrictions are based on new baseline factors such as whether countries issue electronic passports with biometric information to prevent fraud and report information about potential terror threats. That baseline was shared with countries across the globe, and they were given 50 days to comply.

Those that failed to satisfy the "objective process of measuring whether countries met the baseline" are now subject to new restrictions.

The countries that ultimately were included on the list fall into three basic categories, officials said.

— Some, like Iran and Syria, pose legitimate national security threats to the U.S. and refuse to cooperate with U.S. consular investigations.

— Another category includes countries like Yemen and Libya, where local authorities have sought to be as cooperative as possible but lack full control over their territory and the basic ability to provide the information the U.S. wants. In those cases, officials said, the U.S. tried to stress that inclusion on the list wasn't an indictment of those nations' commitment to fighting terrorism.

— The final category includes countries like North Korea and Venezuela whose citizens don't necessarily pose a major threat to the U.S. but where the administration wanted to send a message that the government's broader actions are unacceptable.

Critics said the inclusion of some countries appeared to be largely symbolic and intended to combat perceptions that the ban is targeting Muslims.

The new visa sanctions on Venezuela, for instance, apply only to officials from five government security agencies and their immediate families. Still, Venezuelan President Nicolas Maduro labeled the move a form of "political and psychological terrorism."

The restrictions on North Korea will have little impact because so few of its citizens visit the United States. North Korea's authoritarian government doesn't allow most of its 24 million people to travel abroad, except in special cases such as for jobs that bring in foreign currency or for participation in sporting events.

David Heyman, who served as a Homeland Security official in the Obama administration, said that relative to Trump's first two travel ban attempts, the latest order "seems much more rigorous and with the greater review and interest in an interagency policy." But he said the most pressing threat remains home-grown extremists.

"If we're looking to protect America from the terrorist threat, which is the motive behind this order, this continues to miss the point," Heyman said.

The American Civil Liberties Union said in a statement: "President Trump's original sin of targeting Muslims cannot be cured by throwing other countries onto his enemies list."

The inclusion of Chad, which has been a major player in the fight against Boko Haram, raised eyebrows. In its proclamation, the administration said that while Chad is "an important and valuable counterterrorism partner," its government does not adequately share public safety and terrorism-related information. It also noted several terrorists groups are active in the country.

Chad's government said it learned "with astonishment" of the U.S. government's decision and could not understand the "official reasons for this decision which contrasts with Chad's constant efforts and commitments in the fight against terrorism at regional and global levels."

The Homeland Security Department largely left it up to U.S. embassies in potentially affected areas to gather information about whether their host countries were supplying needed information and cooperating enough with authorities to enable the U.S. to properly vet citizens.

Some embassies pushed back to try to get their host countries removed from the list, concerned that inclusion would negatively affect relations between the U.S. and those countries, administration officials said. In some cases, the embassies sought to explain to Homeland Security that the host country was already cooperating and providing the information the administration said it needed. The officials who commented weren't authorized to discuss the deliberations with reporters and spoke on condition of anonymity.

Turkey was one of the countries that the administration considered adding to the list, but ultimately decided against, one U.S. official sai

Legal challenges to Trump's travel ban mount from US states