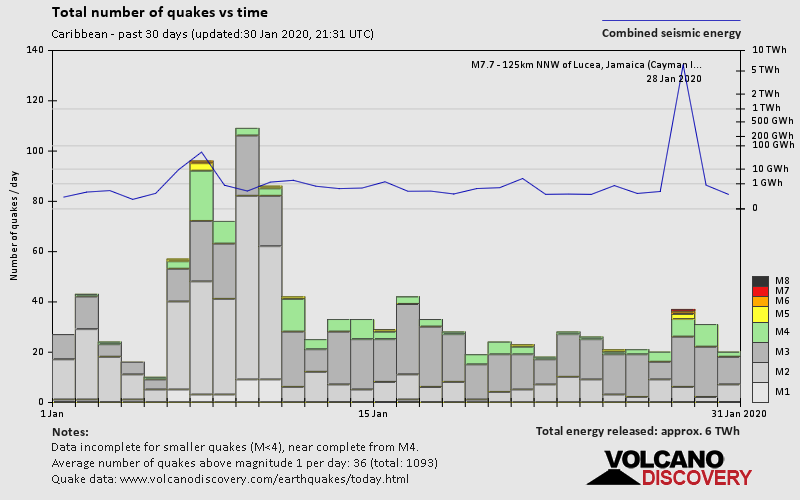 There have been 114 earthquakes of magnitude greater than 4.2 in the Caribbean region over the past month.

According to website volcanodiscovery.com, these affected Puerto Rico, Venezuela, the Cayman Islands, the British Virgin Islands, Costa Rica, the Dominican Republic, Cuba, Jamaica and Dominica. The vast majority of these were experienced in Puerto Rico.

According to the National Oceanic and Atmospheric Administration records, the earthquake experienced in the Cayman Islands and Jamaica on January 28 is now the strongest on record for the Caribbean region since the 1946 quake off the coast of the Dominican Republic.

For those who are concerned that these events are interrelated and there is something amiss, you can breathe a sigh of relief.

According to a phys.org interview with Julie Dutton, a geophysicist with the US Geological Survey: "There is no correlation between them. The Caribbean has plates moving in different directions that contribute to it being highly seismic."

These earthquakes have nothing in common other than their geological cause. Caribbean islands are prone to quakes because they stand along the fault lines of the Caribbean plate, one of the sections of earth’s crust and mantle that are constantly pushing and grinding against each other. As tensions build up and are released in a sudden shift by one plate or the other, an earthquake results.

Earthquake safety: Things to do before, during and after a quake hits