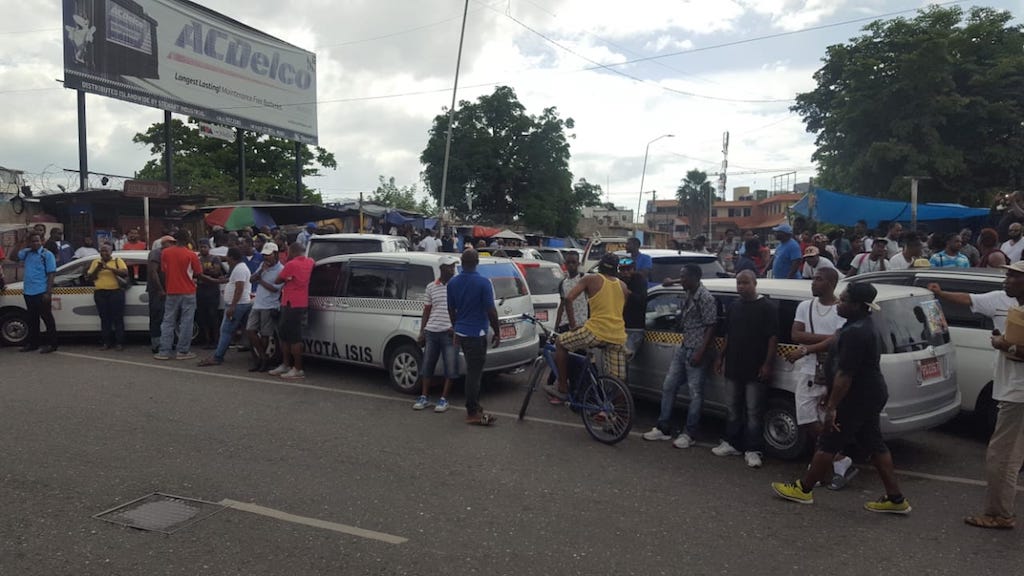 Scores of Corporate Area taxi operators are withholding their services on Monday in protest over what they claim are unfair proposals targetting them in the new Road Traffic Act that is before Parliament.

Among the proposals that have drawn the ire of the cabbies is the move to hold motor vehicle owners accountable for traffic offences committed by individuals they have authorised to drive their vehicles. Raymond Byles, president of the All Island United Route Taxi Association, argued that the punishment – to penalise owners – would be misplaced while suggesting that the move will not act as a deterrent for the drivers who are actually committing the offence.

“What the government is proposing needs to be reviewed,” Byles told Loop News on Monday morning as he joined a large group of striking operators close to a section of the Mandela Park in Half Way Tree.

According to the Bill that was tabled by Transport Minister, Robert Montague, tickets and fines shall apply to the owner of the vehicle as if the owner was driving the vehicle when the breach was committed. However, the owners will not be hit with demerit points as a result of the breaches.

The move has been touted as one of many measures in the new Traffic Act that will go a far way in helping to restore order on the nation’s streets.

However, Byles described the proposals as an all-out attack against the taxi industry, which he claims is being used as a scapegoat by authorities.

“The measures they are planning to put in place will not solve the problem,” Byles argued.

The transport operators are also voicing their displeasure over the proposed fine for public passenger vehicle operators who are caught driving without a badge showing that they have gone through the requisite training.  Louis Barton, president of the Jamaica Association of Transport Owners and Operators (JATOO), expressed outrage at the measure and others which he said will take money from the pockets of industry members while there are no plans, he said, to increase fares.

“We think that some of the proposals are totally ridiculous,” said Barton.

Protest in St James over police killing of two men