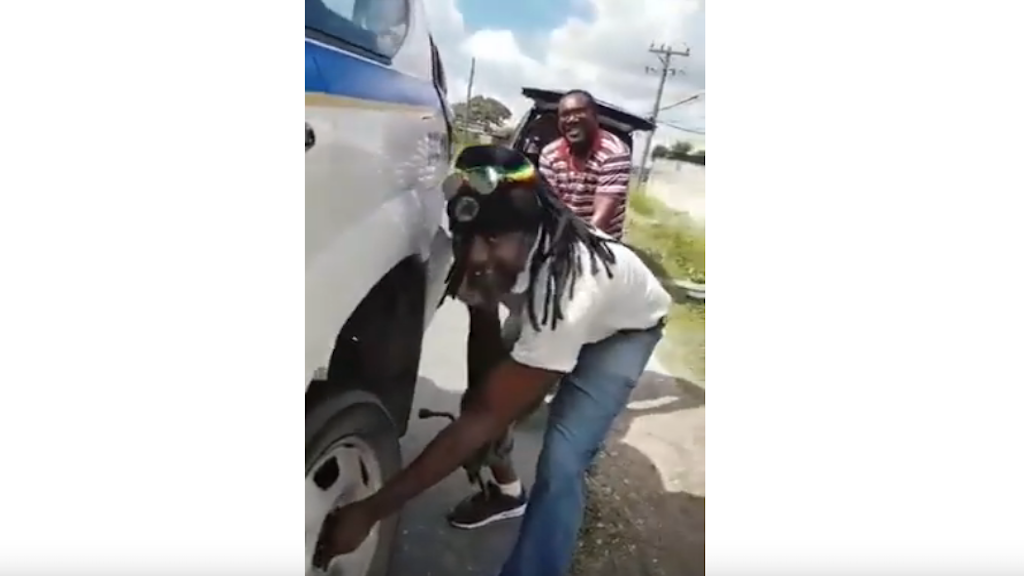 Two taxi operators are being commended for their act of kindness towards two policemen after the officers were left stranded with a flat tyre in Portmore, St Catherine.

The heartwarming incident was captured on video and shared on social media, with scores of people lauding the two good samaritans.

It is being reported that the two officers were traveling in their service vehicle in Portmore when they realised that one of the tyres on the motor car was punctured.

After pulling the vehicle over to the side of the road, the police officers fetched a jack and a lug tool to address the problem. But the officers were saved the trouble of changing the tyre themselves when they were given helping hands from two passing taxi drivers who saw what was happening and jumped to the aid of the lawmen.

The 42-second video footage shows a Rastafarian cabbie known as 'Quick Silver' using the jack to get the vehicle off the ground while being assisted by his colleague, 'Tony'.

The voice of an unidentified man who is recording the video can be heard saying, "You could not tell me that these people still exist. The police are in distress and these two taxi drivers helped the police. We really appreciate this type of assistance. Not everyday citizens are willing to stop and help the police."

Meanwhile, the recipients of the act of kindness and the wider constabulary have expressed gratitude to the kind-hearted cabbies.

Superintendent Robert Bar, one of the officers who had occupied the disabled vehicle, said the incident has left him feeling encouraged.

“It is certainly not every day you see things like this happening, and to see two members of the public, taxi operators, stopping to offer assistance has left us feeling as if there is hope in Jamaica,” Bar told Loop News.

He added that, with the regular standoffs between police officers and members of the public, and criticisms levelled at lawmen on a daily basis, the simple act has demonstrated that, despite all of the setbacks, there were still people out there who cared about the police.

In addressing the incident, the Jamaica Constabulary Force wrote on Facebook that "When we work together, we can achieve so much as a nation."

Good Samaritan from Spanish Town gets $50,000 reward from JPS