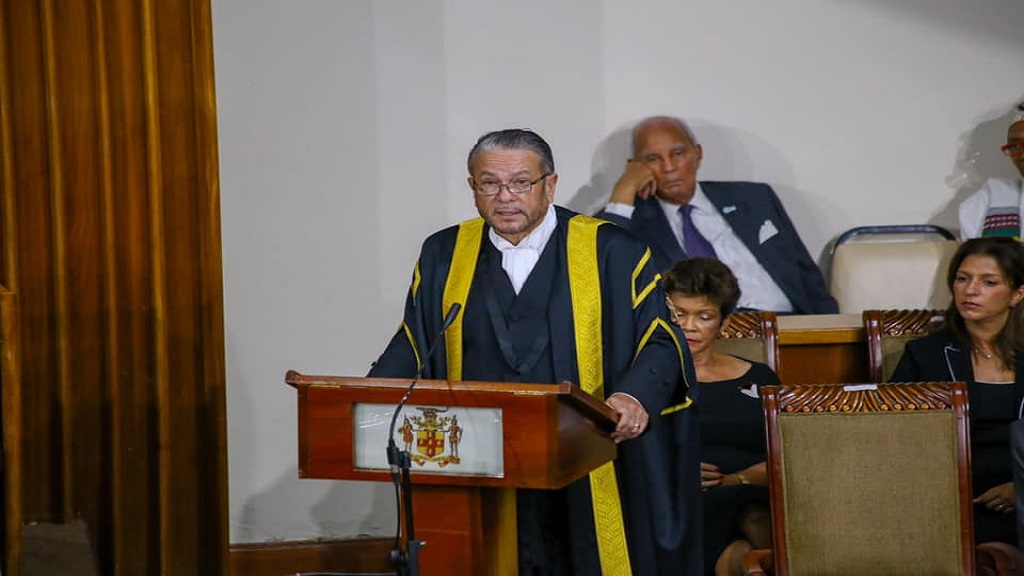 President of the Senate, Tom Tavares-Finson stirred controversy on Wednesday when he demanded that the People’s National Party (PNP)  apologise for the 1976 State of Emergency.

He demanded they say sorry to Jamaicans and members of the then Opposition Jamaica Labour Party (JLP) who were detained at ‘Red Fence’ at Up Park Camp during the year-long state of emergency (SOE) that was imposed by the late former Prime Minister Michael Manley in June 1976.

Tavares-Finson made the call during a joint sitting of the parliament in a special tribute to the late former Prime Minister Edward Seaga who died on May 28 on his 89th birthday. Seaga’s funeral service will be held this Sunday, June 23,  followed by interment at National Heroes Park.

Tavares-Finson, who was a close friend of Seaga, demanded that the PNP apologise to House Speaker Pearnel Charles and Olivia Grange, the Minister of Culture, Gender, Entertainment and Sport who were both detained during the SOE. He also demanded an apology on behalf of the family of the late Ferdie Yap who he said never regained his health after he was released from detention.

Some members of the Opposition walked out of the chamber as Tavares-Finson spoke. However, his statements were mostly met with enthusiastic applause by members of the governing Jamaica Labour Party (JLP).

Up to that point, Tavares-Finson was reliving stories which demonstrated the bravery of Seaga; his work that led to the 1979 creation of the Electoral Advisory Committee, which has since been renamed the Electoral Commission of Jamaica; and his efforts to protect the rights of the Jamaican people.

The Senate president then mentioned what many political watchers regard as one of the most politically divisive chapters in Jamaica’s history, the 1976 SOE.

Of note is that the parliament was paying tribute to Seaga on the 43rd anniversary of the SOE which was imposed on June 19, 1976 and ended in June 1977.

Said Tavares-Finson: “Mr Seaga (was) a consistent, fearless and outspoken advocate for the preservation of the rights of the Jamaican people that earned him the wrath of many but the love and respect of many more. (He) was about to have his leadership tested in the most extreme circumstances.”

Tavares-Finson said that it was Seaga’s management of the JLP during this period that earned him the undying love and respect of the membership of the JLP.

“He was tested in the crucible of political and social turmoil and emerged the giant of a leader…a hero to many who relied on him to sustain them and their families during this traumatic time, a shoulder to cry on, a brother to lean on, a leader to depend on,” he said.

Tavares-Finson said it was historians and not him who have agreed that the 1976 SOE was declared on a “fraudulent pretext” with both the Heads of the Special Branch and the Military Intelligence Unit testifying before a commission of enquiry that they had no part in the decision to declare the SOE.

“Those who sing, today, the praises of Mr Seaga’s resilient spirit, his commitment to democracy. Those who sing his encomiums today, should apologise to the people of Jamaica for the injustice wrought on them by the 1976 state of emergency. An apology is owed to the people of this country and the members of the Jamaica Labour Party, many of whom spent almost a year in Up Park Camp,” Tavares-Finson declared.

He then singled out Grange, Charles and the late Ferdie Yap who he said never regained his health after he was released from detention. He noted that Grange, having sent her baby to Canada while she was detained, was only released following the intervention of Seaga. And he said Charles’ family “endured trauma after trauma during his incarceration in Red Fence”.

“Offer this apology, remove this stain from the national fabric of the country and do this in tribute to Edward Phillip George Seaga,” Tavares-Finson said to sustained applause at the end of his speech.

Among those who paid tribute to Seaga on Wednesday were former prime ministers PJ Patterson and Bruce Golding.