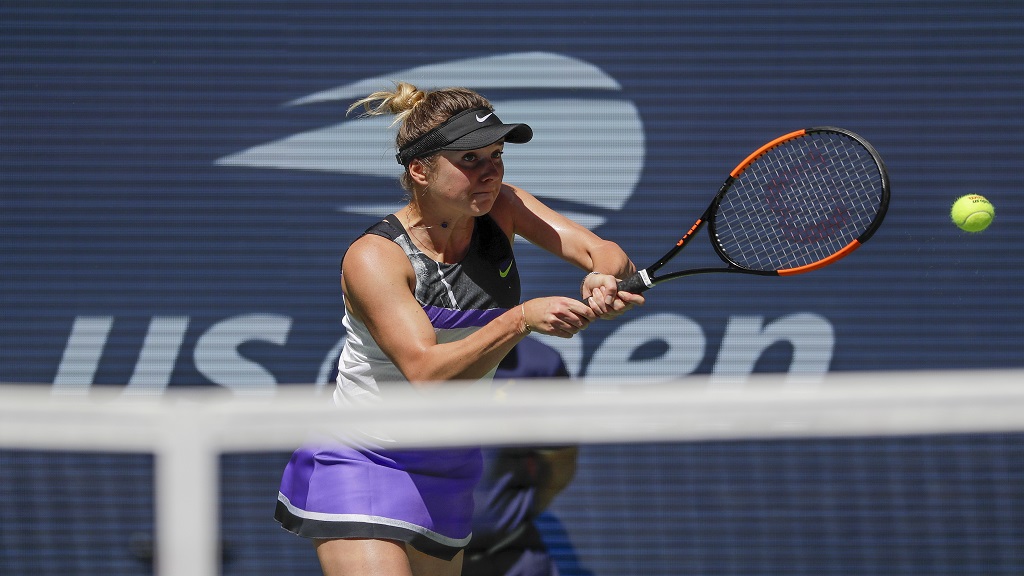 Elina Svitolina, of Ukraine, returns a shot to Johanna Konta, of the United Kingdom, during the quarterfinals of the US Open tennis championships Tuesday, Sept. 3, 2019, in New York. (AP Photo/Frank Franklin II).

Elina Svitolina reached the U.S. Open semifinals for the first time with a 6-4, 6-4 victory over Johanna Konta on Tuesday.

The No. 5 seed followed her first appearance in the final four of a major at Wimbledon in July by getting right back there at Flushing Meadows, where she will face either six-time champion Serena Williams or Wang Qiang.

The players exchanged three straight breaks of serve in the third set but Svitolina played a cleaner match than Konta, who made 35 unforced errors compared to Svitolina's 13.

The 16th-seeded Konta was trying to reach her first U.S. Open semifinal. She has reached that round in the other three major tournaments.

Meanwhile, Roger Federer resumes his bid for his first U.S. Open title in 11 years with a quarterfinal under the lights at night on Tuesday against unseeded Grigor Dimitrov.

The 38-year-old Federer is trying to become the oldest male Grand Slam semifinalist since Jimmy Connors was 39 during his 1991 run at the U.S. Open.

Federer's potential path to the final no longer includes nemesis Novak Djokovic — or anyone else who ever has beaten him on a hard court, for that matter.

That's because Federer is a combined 26-0 on that surface against the players left on his half of the bracket. He is 6-0 on hard courts against Dimitrov, 17-0 against Stan Wawrinka and 3-0 against Daniil Medvedev.

Wawrinka, the 2016 champion in New York, takes on the fifth-seeded Medvedev in the afternoon Tuesday.

Serena Williams will test her right ankle after rolling it and tries to return to the semifinals when she plays Wang Qiang. Elina Svitolina meets Johanna Konta in another women's quarterfinal.

US Open 2019: Serena skips by dangerous Muchova in impressive fashion

US Open 2019: Nadal cruises past Chung to end comfortable week