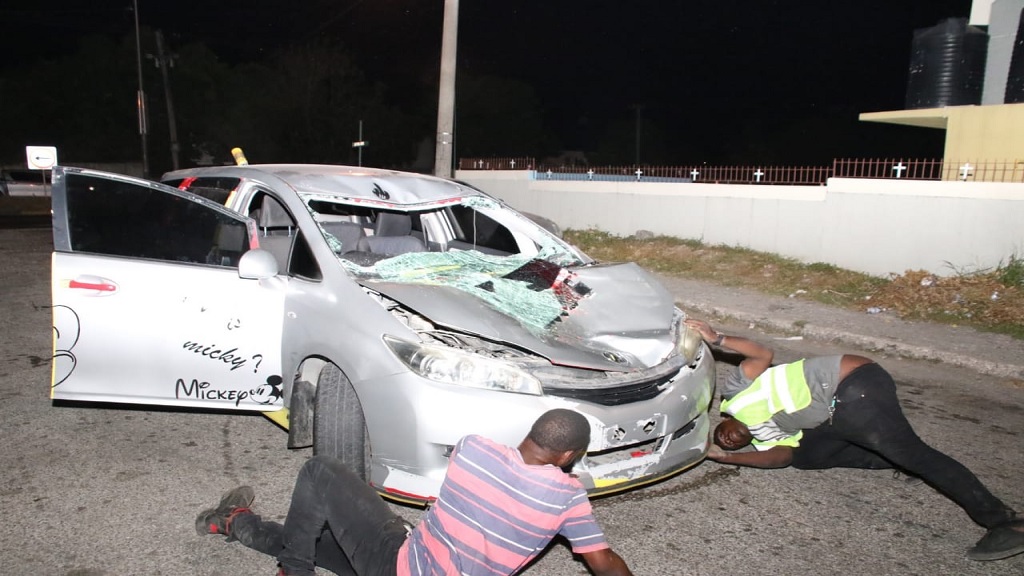 This crashed vehicle minus its licence plates, was at the scene of a fatal collision on Washington Boulevard in St Andrew on Tuesday night.

The police have launched a probe into why the licence plates were removed from the vehicle that is believed to have been involved in a crash in which a woman was mowed down and killed close to a busy intersection on Washington Boulevard in St Andrew on Tuesday night.

Police said the deceased has been identified as 44-year-old Patricia Russell, a cosmetologist of Bromley, Kingston 20.

A number of persons at the time of the crash said they thought the female was an elderly person.

Reports are that about 8:00 p.m., Russell was trying to cross Washington Boulevard close to the Weymouth Drive intersection, when she was struck down by a vehicle.

“The lady was trying to cross the road when the vehicle slammed into her,” said an alleged eyewitness.

Disturbing reports surfaced that after the impact, the injured woman called out for help, but was ignored by some passers-by who were more focused on capturing video footage of the incident.

As new details on the incident emerge, there are reports that the police have launched an investigation into how the licence plates on the vehicle that is believed to have hit the woman were removed at the scene of the crash.

According to a police source, the vehicle, which was being operated as a taxi, is believed to be the unit that mowed down Russell.

The police source said if the above information is true, it would not only be a serious breach of the law, but the development would signal the detection of a method being used by persons to try and throw off investigators on the question of who owns motor vehicles that are involved in serious collisions.

Interestingly, the official police report on the incident made no mention of whether or not the driver of the vehicle at the centre of the collision was held, and whether or not the crashed car at the scene was the one that hit the now deceased woman.

Woman dies after being struck by car along Washington Blvd

Two pedestrians mowed down on main road in St James