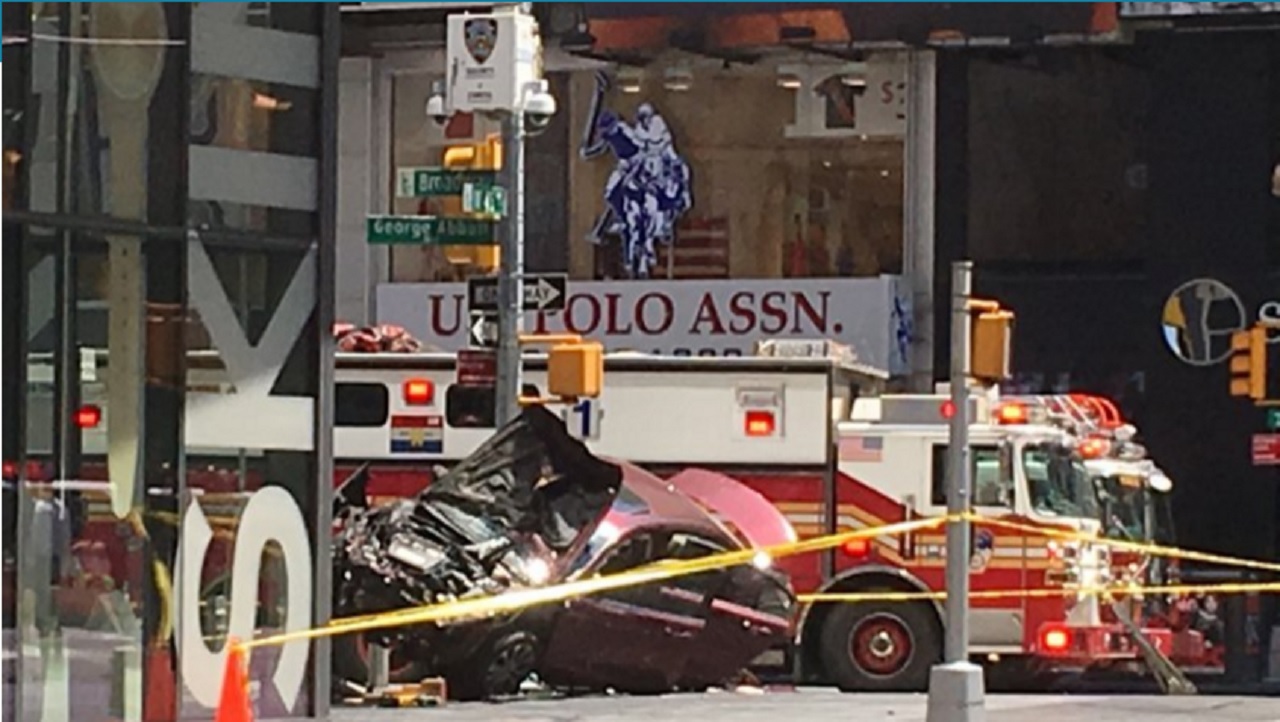 A smashed car sits on the corner of Broadway and 45th Street in New York’s Times Square after driving through a crowd of pedestrians Thursday, May 18, 2017.

A Times Square motorist accused of steering his car onto one of the busiest sidewalks in the U.S. and mowing down pedestrians has been charged with murder and 20 counts of attempted murder, police say.

Rojas was arrested Thursday afternoon after he drove his car for three blocks in Times Square, hitting nearly two dozen people before steel security barriers finally stopped him. An 18-year-old tourist from Michigan was killed. Her 13-year-old sister was among the 22 injured, four of them critically.

Rojas is to be arraigned Friday. It wasn’t clear if he a lawyer.

Officials say he had served in the U.S. Navy but was discharged following disciplinary problems. After his arrest, he told police he was “hearing voices” and expected to die, two law enforcement officials said.

After the wreck he emerged from his vehicle running, yelling and jumping before being subdued by police and bystanders in a chaotic scene.

“He began screaming, no particular words but just utter screaming. He was swinging his arms at the same time, said Ken Bradix, a security supervisor at a nearby Planet Hollywood restaurant who tackled Rojas.

Rojas initially tested negative for alcohol, but more detailed drug tests were pending, according to two law enforcement officials who were not authorized to speak publicly and spoke to The Associated Press on the condition of anonymity. The officials said Rojas told officers he had been hearing voices.

The carnage happened in a part of the city that has long been considered a possible terrorist target because of its large crowds, a concern that became elevated after the Sept. 11 attacks and compounded by recent attacks in England, France and Germany in which vehicles plowed through crowds of pedestrians.

Rojas’ motivation was unclear, but Democratic Mayor Bill de Blasio said there was “no indication that this was an act of terrorism.”

The picture that quickly emerged of Rojas from neighbors and authorities was of a man with problems.

A week ago he was arrested and charged with pointing a knife at a notary, whom he accused of stealing his identity. He pleaded guilty to a harassment violation. In previous arrests, he told authorities he believed he was being harassed and followed, one of the law enforcement officials said.

Rojas was arrested on charges of driving while intoxicated in 2008 and 2015, police Commissioner James O’Neill said, losing his license for 90 days.

A neighbourhood friend in the Bronx, Harrison Ramos, said Rojas wasn’t the same when he came back from the Navy in 2014.

“He’s been going through a real tough time,” he said.

Rojas enlisted in 2011 and was an electrician’s mate fireman apprentice. In 2012 he served aboard the U.S.S. Carney, a destroyer.

Navy records show that in 2013 he spent two months at a naval prison in Charleston, South Carolina. They don’t indicate why.

Rojas spent his final months in the Navy at the Naval Air Station in Jacksonville, Florida, before being discharged in 2014 as the result of a special court martial, a Navy official said. Details were not immediately available.

Thursday’s mayhem began at noon on a hot, clear day that brought large crowds of people into the streets to enjoy the good weather.

“People just got stunned,” said Bruno Carvalho, a student at SUNY Albany. “I don’t think there was actually time for screaming.”

Police identified the woman killed by the car as Alyssa Elsman, of Portage, Michigan.

“If you didn’t know her, you might think she’s reserved or shy,” school principal Eric Alburtus said. “But if you could talk to her for a minute, you’d realize she was engaging. She was bright. She was funny.”

Elsman’s 13-year-old sister was also struck by the car, but survived, police said.

The apartment building where Rojas lives was cordoned off by police Thursday. It was unclear when Rojas, who was in custody, would get a lawyer or be arraigned.