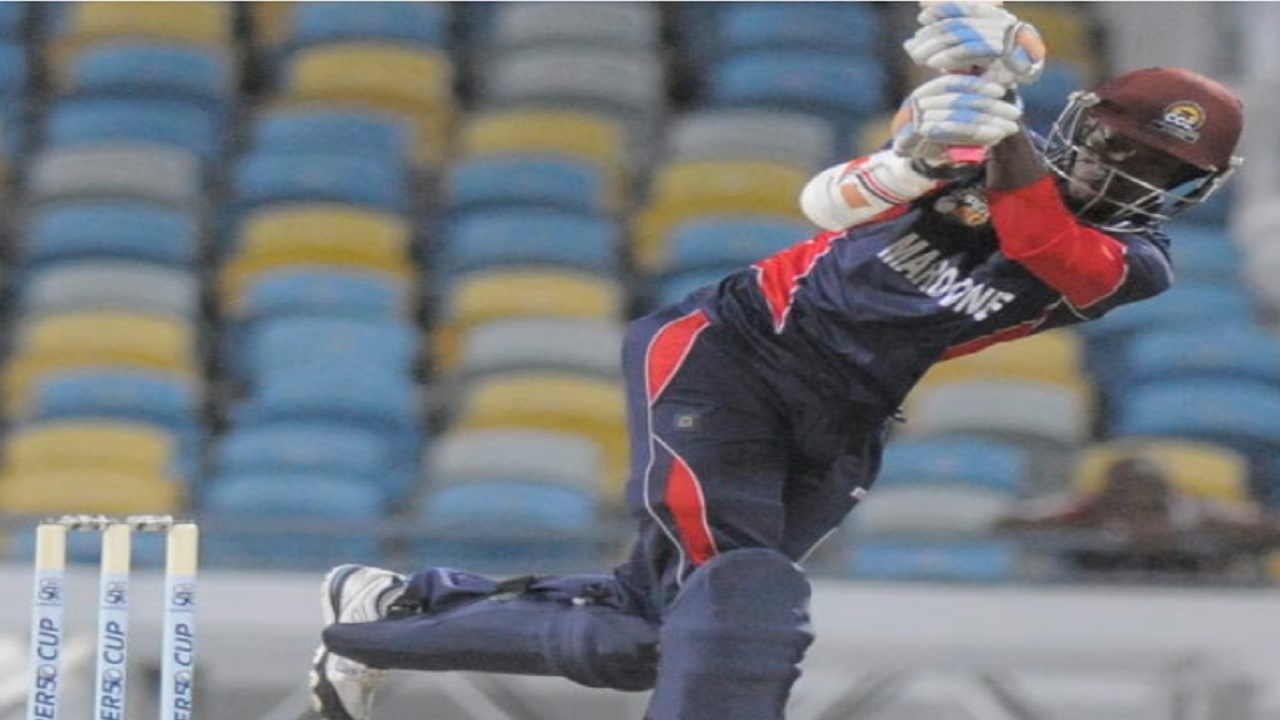 Trinidad & Tobago Red Force ticked off a third straight victory and English county side Hampshire diligently defended a small total to complete their first win in the Super50 Festival on Monday in Barbados.

And, workmanlike performances from the two Bradleys, Taylor and Wheal, inched Hampshire to a tense, four-run victory over Combined Campuses & Colleges Marooners at Kensington Oval.

Red Force reached their target after they lost unnecessary wickets with victory already in sight, thanks to an even hundred from Player-of-the-Match Lewis.

Fellow left-hander Amir Jangoo made 41 and West Indies One-day International vice-captain Jason Mohammed saw them over the finish line with 29 not out.

Lewis quickly took the game away from Volcanoes with his third consecutive score over 50, smashing 10 fours and three sixes off 90 balls, a good sign as he prepares for the ICC World Cup qualifiers with West Indies in Zimbabwe.

More significantly, he propelled a 79-run first wicket partnership with Tion Webster (24) before putting on 85 for the second wicket with Jangoo.

His innings came to a close through a brilliant running catch at square leg by Kesrick Williams off left-arm spinner Larry Edward, who claimed 4-38 from eight overs.

This triggered the fall of a cluster of wickets before Mohammed eased the tension and saw off the late Volcanoes challenge.

Sent in, Volcanoes produced their best batting effort of the tournament, but it was not enough to prevent them from suffering their third defeat on the trot.

Devon Smith, the leading scorer in the Digicel 4-Day Championship with a record run aggregate, finally broke out of his rut in this tournament to hit the top score of 68.

He anchored three successive half-century stands with fellow opener Johnson Charles, Kirk Edwards and Andre Fletcher to put Volcanoes in a strong position at 173 for three before he departed in the 38th over.

But Narine once again left his mark on the tournament, ending with 4-25 from his allotted 10 overs, as he dented the hopes of a strong finish for the Volcanoes with the fourth hat-trick in the 42-year history of the Regional One-day Tournament in the 46th over of the innings.

He had Kavem Hodge caught behind for nine and Delorn Johnson stumped for a first-ball duck before West Indies fast bowler Kesrick Williams had the dubious distinction of being the hat-trick victim, trapped lbw for a first-ball duck – offering no stroke – as Volcanoes lost their last seven wickets for 49.

Wheal grabbed 3-39 from his allotted 10 overs, and there were two wickets apiece for 20-year-old seamer Asher Hart and Barbados-born, former West Indies speedster Fidel Edwards that crippled the Marooners’ run chase and eventually became a test of nerves.

Hants seemed to have the upper hand when they reduced Marooners to 120 for nine in the 37th over, but Keron Cottoy made 30 not out and anchored a 28-run last-wicket stand with Jermaine Levy to nearly steal victory.

With just five runs needed for victory, off-spinner Joe Weatherley trapped Levy lbw to settle the matter and hand the visitors their first win of the tournament.

Vikash Mohan was the top scorer for Marooners with four boundaries in 40 off 78 deliveries, but he was the only batsman among the top order to show enterprise.

Earlier, Hampshire were under pressure, when they lost their entire top order cheaply to slump to 15 for five in the sixth over.

But Player-of-the-Match Taylor produced a resolute 69 off 108 balls with five fours, staging stands of 38 for the sixth wicket with opener Tom Alsop and 40 for the eighth with Hart.

Even then, Hants struggled to 101 for nine in the 33rd over before Taylor combined with last man Wheal to put on 51 – the best stand of the match – and provide precious runs at the end.

Left-arm spinner Yannick Ottley was the pick of the Marooners bowlers with 3-33 from 9.3 overs after sharing the new ball with Levy.

Taylor spoke to CWI Media following play. Details for the download of the audio from this media opportunity are below.