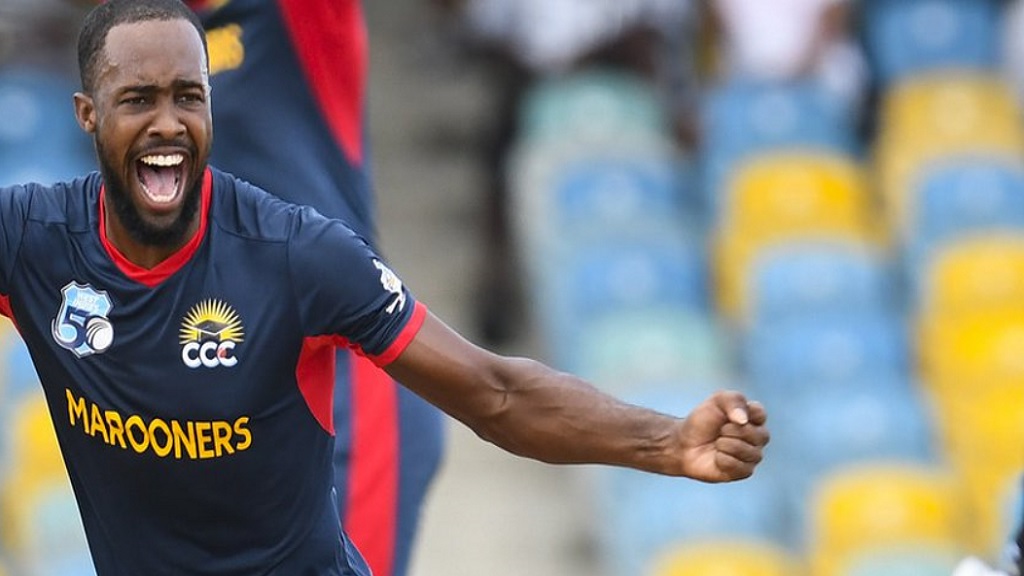 A stunning spell from rookie fast bowler Akeem Jordan blew away a star-studded Trinidad & Tobago Red Force batting line-up and set up a sensational, seven-wicket victory for Combined Campuses & Colleges Marooners on Friday in Barbados, catapulting them into the Grand Final of the Super50 Cup.

Jordan ripped the heart out of the Red Force batting with a spell of 5-18 from 10 overs, as the Group “A” runners-up were dismissed for 92 in 33 overs, after they were put in to bat in the second, day/night semi-final at Kensington Oval.

Dwayne Bravo, who announced his retirement from the international game two days prior, led the way for the Red Force with 27.

But Kjorn Ottley, another T&T-born left-hander, not out on 39, and his captain Carlos Brathwaite, the West Indies Twenty20 International captain, not out on 29, then ushered the Marooners to victory in 16.2 overs, sharing 41 – unbroken – for the fourth wicket.

The result meant that the Marooners will face 10-time champions Guyana Jaguars in the Grand Final on Sunday at this venue.

The Red Force ran into early trouble, slumping to three runs for four wickets in the third over, after Jordan snared three scalps off the second, fifth and last deliveries of his second over.

Jermaine Levy made the breakthrough, when he had Lendl Simmons caught behind for two, but Jordan left the innings in disarray, when Sunil Narine and Jason Mohammed edged him to the ‘keeper, and Red Force captain Denesh Ramdin mistimed a flick to mid-wicket.

The rot continued when Nicholas Pooran was caught behind off Jordan from a top-edged cut in the ninth over and the same bowler sealed the fate of the Red Force when he bowled Darren Bravo offering no shot to a ball that moved back.

Red Force were 25 for six, and Bravo’s elder brother Dwayne and Kieron Pollard carried them past 50 with a stand of 33.

Left-arm spinner Yannick Ottley, Kjorn’s younger brother, broke through when Pollard drove him to long-on in the 19th over, and there was neither substance nor stability from the rest of the batting.

Red Force narrowly escaped being dismissed for their lowest total ever in the history of the West Indies 50 overs-a-side competition, but it was the second time that the Marooners had bowled them out for this total which also occurred at this venue.

Though Red Force claimed the scalps of Kyle Corbin, Trinidad & Tobago-born left-handed wicketkeeper/batsman Amir Jangoo and Jonathan Drakes cheaply, the elder Ottley and Brathwaite ensured there was no miracle comeback for the visitors.

Scorpions blow away Hurricanes to remain unbeaten in Super50 Cup