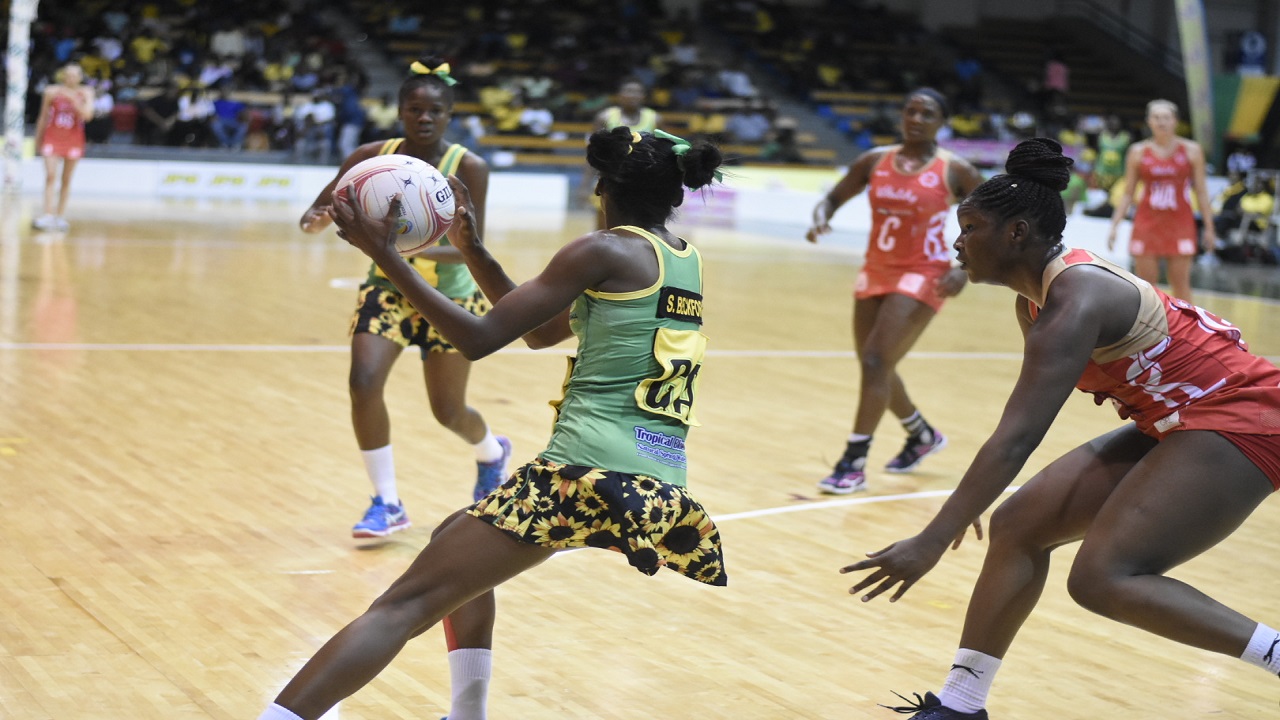 Jamaica's Shantal Slater looks for a pass during Game 1 of the three-match netball series against England at the National Indoor Sports Centre on Thursday night. Jamaica won 55-43. (PHOTOS: Marlon Reid).

The Sunshine Girls, ranked fourth in the world, took control of the match from the start and maintained a constant dominance over the second ranked English team.

The Sunshine Girls have now won three consecutive matches, having conquered Trinidad and Tobago at the same venue 61-40 and 51-40 on Sunday and Tuesday.

From the opening whistle, the Sunshine Girls showed their intent as they stole England’s first two centre passes to take a 4-0 lead.

They, however, quickly relinquished that advantage with turnovers in midcourt as England roared back to level the score at 5-5.

The Jamaicans recovered and improved their performance forcing a number of turnovers from England to eventually end the quarter 16-11.

The Sunshine Girls continued pressuring England in midcourt during the second quarter resulting in a 14-goal lead at the half, 35-21.

England started the third quarter positively but the Sunshine Girls quickly recoup to evenly trade goals England until two minutes left, as another turnover had Jamaica leader 46-32 at the end.

With a comfortable lead, Jamaica cruised for most of the fourth quarter, making a number of substitutions and this backfired somewhat during the middle of the period, with England making a dent in the lead as with three minutes left, they cut it to nine at 50-41.

The Sunshine Girls, however, were able to hold on for a comfortable win.

Veteran shooter Jhaniele Fowler led the Sunshine Girls with 34 goals of her 35 attempts.  Shanice Beckford supported with 12 from 17, while Shantal Slater had seven from seven and Thristina Harwood, two from three.

Helen Hussy led England with 27 goals from 35 attempts, Eleanor Cardwell had 10 from 14, Kadeen Corbin, four from eight and Ella Clarke, two from four.

Jamaica’s coach, Marvette Anderson, believes that although winning by nine goals it was a hard-fought victory.

Anderson said, “it was a very good game. I think the ladies did exceptionally well. I am proud of what the ladies did as they showed character and guts.

“It wasn’t easy at all as we are playing the No. 2-ranked team in the world so there is no easy thing about that, but I think the ladies were ready for the task and I think they did a marvelous job."

England's coach Tracey Neville said, “we knew it was going to be a tough game. We knew that the start will be crucial and we had some basic errors, which made us not good enough.

“I was really disappointed with that first half with our execution in being able to get that ball up and reward ourselves from the limited turnovers that we got so for me I think we were a little lazy and casual and we will have to step up going into the second match."

The other two matches will be played at the same venue on Saturday and Monday.