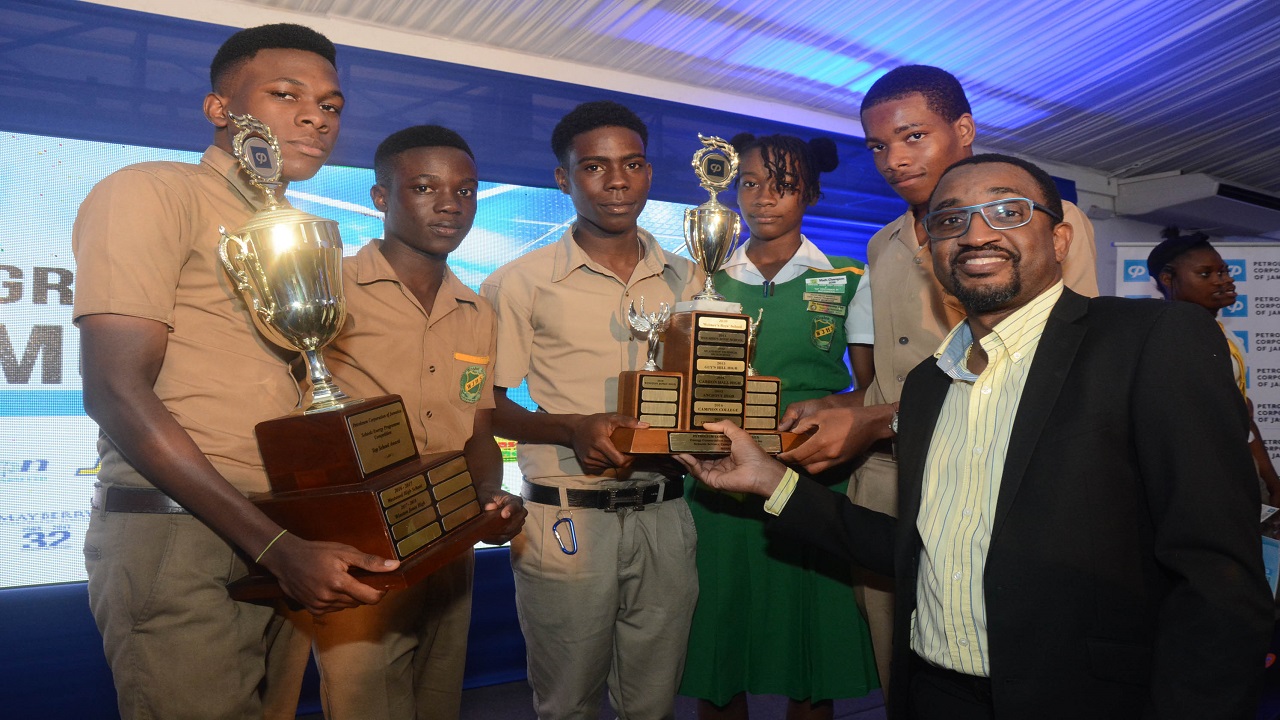 Winston Jones High School dominated the competitions, copping prizes in each of the four contest areas to take the coveted Top School title.

More than $4 million in cash and prizes was awarded to 87 students as the 2017/18 Petroleum Corporation of Jamaica (PCJ) Schools Energy Programme Competition wrapped up last Friday.

Winston Jones High School dominated the competitions, copping prizes in each of the four contest areas to take the coveted Top School title. The Manchester based institution also won the 16 – 19 age category of the Science Competition which earned them a $500,000 grant from the PCJ to implement the winning project at the school.

The school’s science team of Okelo Smith, Kadine Jordine, Shawn Clarke, and Christopher Morgan designed a model which demonstrates how a flywheel storage system can be used to supply energy to the school during short peak demand periods. In addition to the grant, the quartet was awarded individual prizes of $50,000 each.

Launched in 2003, the PCJ Schools Energy Programme is the Corporation’s major vehicle for promoting energy education among the country’s youth. The programme, which engages primary and high school students from institutions across the country, aims to sensitize young persons to issues affecting the energy sector.

Traditionally, the competition involved an essay, science and poster category; however this year a jingle contest was added to the mix which gave the youngsters an additional outlet for creative expression.

For the 2017/18 academic year, the flagship initiative exposed 2,244 students from 103 schools across the island to social and economic energy issues as well as methods of energy production and the importance of efficiency and conservation.

This was done through seminars that featured presentations from industry professionals as well as educational tours of energy generating facilities such as the Jamaica Public Service Company’s (JPS) hydro plant and wind farm and the BMR wind farm, which are all in St. Elizabeth, the Wigton Windfarm in Manchester and New Fortress Energy’s regasification plant in Montego Bay.

While speaking at the awards ceremony the PCJ’s Manager, Corporate Affairs and Communications said, “The PCJ firmly believes that educating the youth is an important step in managing energy usage as our young people will shape our future. I commend all the students who participated in the programme as well as their parents and teachers who supported them and I hope all of them will put what they have learned into practice.”

The PCJ received the support of public and private sector entities to underwrite a portion of the cash and other prizes provided at the awards ceremony.

Campion College gets $500,000 for solar-powered water system from PCJ

Man wanted for murder arrested after 5 years on the run