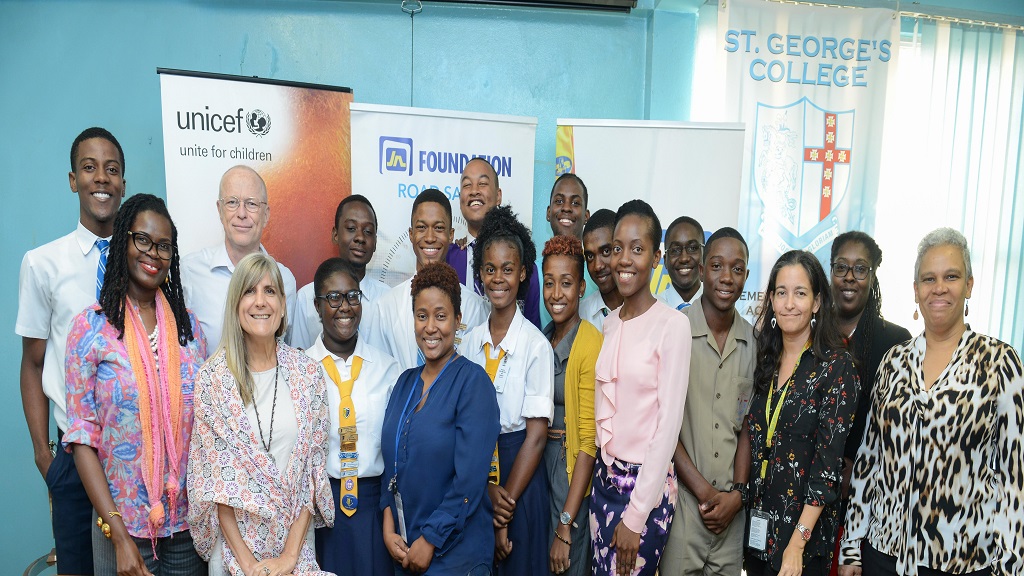 The students made the recommendations during a recent meeting with JN Foundation and a UNICEF Delegation, to discuss the collaborative efforts of the Road Safety Programme and the Students’ Safety on the Streets (SSOS) Initiative.

Corporate Area high school students are lobbying for safe school zones, which they say would involve expanding the number of pedestrian crossings and increasing police presence/patrols in these zones.

The students made the recommendations during a recent meeting with JN Foundation and a UNICEF Delegation, to discuss the collaborative efforts of the Road Safety Programme and the Students’ Safety on the Streets (SSOS) Initiative to support and activities  that seek to mitigate the dangers students face while traversing to and from school, within the downtown Kingston area.

“We need to have areas, such as clusters of schools around Kingston Central and other clusters of schools declared “safe zones.” There needs to be a policy and legislation,” said Chad Rattray, head boy of Kingston College and chair of the Students’ Safety on the Streets Initiative, as he pointed out that other countries have implemented similar policies to protect their children.

The students also revealed that they were concerned about their safety while walking to and from school.

“The possibilities of either being robbed or harassed are high. Therefore, I would take the taxis, however, there is still some level of fear, because some of the taxis are robot taxis,” Donjah Pommells, secretary of the SSOS and head girl of Convent of Mercy Academy, Alpha Girls’ School, related.

They called for a school bus system to be put in place, to transport students during peak hours and after school.

The students were commended by Onyka Barrett Scott, general manager of the JN Foundation, for their proactiveness.

Barrett Scott pointed to data from a “Cost of Care Report,” produced by the Violence Prevention Alliance, in collaboration with the JN Foundation, which revealed that it could cost the Government of Jamaica some $9 million to treat a person who has been hospitalized with injuries from a motor vehicle accident.

“This also makes the case why initiatives such as yours are important because it is a lot cheaper to implement these initiatives and to get people to change their behaviour and practices,” she said.

Dr Rebecca Tortello, Education Specialist at UNICEF commended the students “on their decision to focus on issues related to their safe journey to and from school as all children have a right to an education free from fear.”

The SSOS Initiative is a student-led cause, which advocates for students who feel unsafe and have been victims of crimes, such as sexual harassment and robberies while on their way to and from school.

In observation of Peace Month, the SSOS organised a Peace March in the Kingston Central Area communities, on March 22. The event focused on taking a stance against violence towards students.