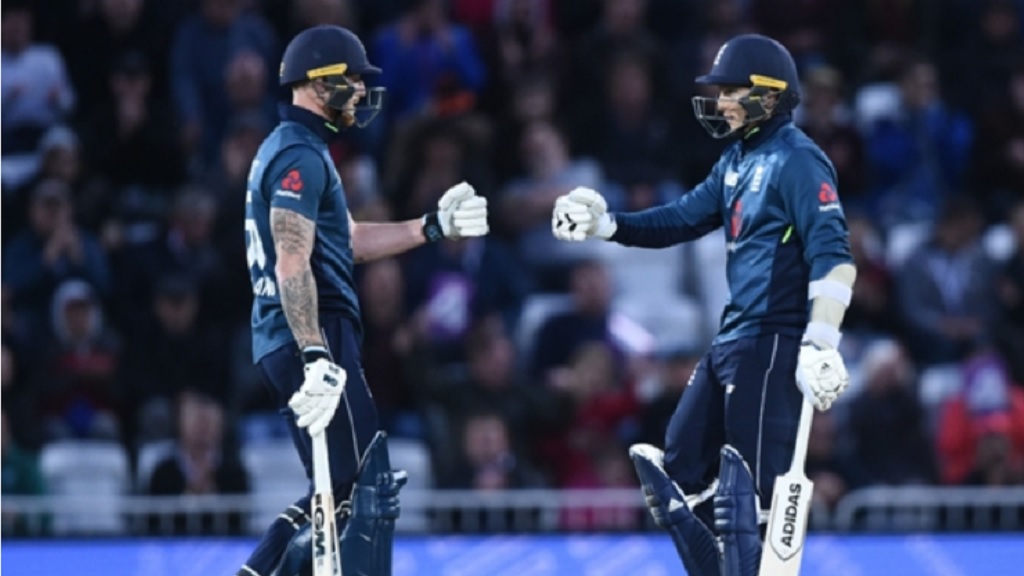 Ben Stokes and Tom Curran during their crucial stand in Nottingham.

Ben Stokes and Tom Curran rode to England's rescue on Friday as they overcame a major wobble with the bat to beat Pakistan by three wickets at Trent Bridge and open up an unassailable 3-0 lead in the five-match ODI series.

The much-changed hosts - led by Jos Buttler with Eoin Morgan suspended - were initially cruising in pursuit of 341, reaching 201-1 inside 28 overs on the back of Jason Roy's 89-ball 114.

Roy's dismissal at the hands of Mohammad Hasnain triggered an alarming and unexpected collapse that saw England lose four wickets for 15 runs in 17 deliveries.

The required run-rate rose above nine per over thereafter but Stokes (71 not out) shared a crucial seventh-wicket partnership of 61 with Curran, who followed up figures of 4-75 with 31 runs, before sealing victory in the company of Adil Rashid with three balls unused as Pakistan were left to rue a series of sloppy errors in the field.

For the third match in succession, a Pakistan century proved in vain, Babar Azam striking 115 from 112 balls in a losing cause.

Pakistan's total of 340-7 represented their lowest score of the series so far and looked short of par at a venue synonymous with high-scoring feats in recent years, most notably when England registered a world-record tally of 481-6 against Australia last June.

The tourists were dealt a blow early in their innings when Imam-ul-Haq was struck on his left elbow by a Mark Wood short ball and forced to retire hurt. Happily, X-rays showed the opener had avoided a fracture and he returned at the end of his side's innings to finish six not out.

Babar, brought to the crease in the fourth over due to Imam's injury, produced some typically thrilling strokes as he shared in century stands with Fakhar Zaman (57) and the recalled Mohammad Hafeez, who made a somewhat streaky 59.

However, none of that trio were able to accelerate effectively and Shoaib Malik's 26-ball 41 appeared too little, too late as England kept their opponents in check.

Roy rode his luck in reply and would have been run out for seven had Babar managed a direct hit. The opener also offered chances on 25 and 33 and made Pakistan pay for their missed opportunities, kicking on superbly after James Vince had been bowled by Hasnain for 43.

A stunning six over cover off Hafeez brought up Roy's hundred, before he, Joe Root (36), Buttler (0) and Moeen Ali (0) all departed in quick succession to breathe fresh life into the contest.

Junaid Khan then pulled off a superb catch off his own bowling to account for Joe Denly (17), but Pakistan's fielding was hugely unimpressive on the whole and they seemingly failed to appeal when Curran may have been run out for seven.

With Pakistan looking increasingly ragged, England gradually regained control and Stokes fittingly hit the winning run to round off an encouraging individual display ahead of the Cricket World Cup on home soil.

Bairstow dazzles as free-scoring England romp to another win