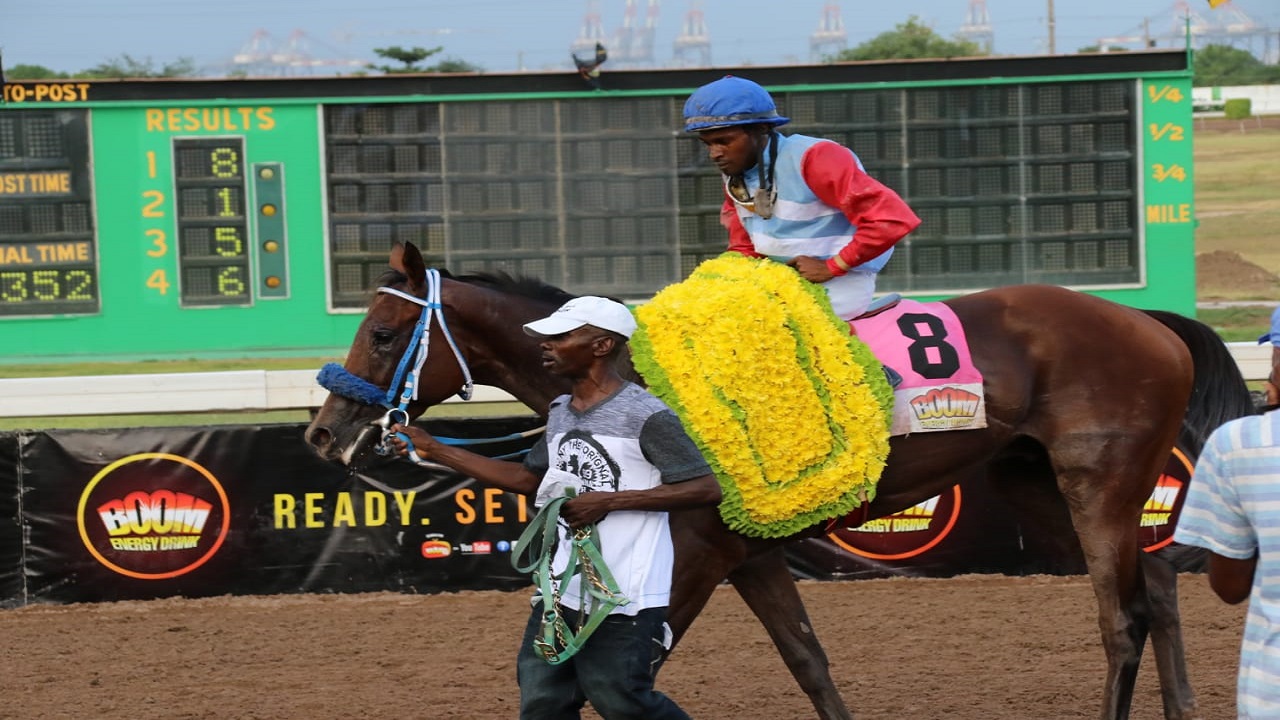 Drone Strike, with jockey Aaron Chatrie, is being led to the winners' enclosure after the three-year-old bay gelding scored a 24-1 upset victory in the Jamaica Derby over 2400 metres at Caymanas Park on June 30. (PHOTO: Llewellyn Wynter).

Trainer Patrick Lynch’s DRONE STRIKE, goes for a second straight classic win at Caymanas Park on Saturday in the Jamaica St Leger, renewing rivalry with MARQUESAS, the only horse close to him in last month’s Jamaica Derby, which he won at odds of 24-1.

The surprise package of the Derby with one win under his belt, a narrow debut victory over six furlongs in December, DRONE STRIKE was the only horse in the Derby able to go in chase of MARQUESAS, who tried to slip the field five furlongs out.

After collaring MARQUESAS turning for home, DRONE STRIKE powered clear under Aaron Chatrie to win the 12-furlong Derby by almost three lengths. The third-place horse, the Oaks-winning filly, FAYROUZ, was 20-odd lengths behind.

Lynch has been enjoying a great classic year, winning the Thornbird Stakes and 1000 Guineas with DISABILITY CHARM, followed by DRONE STRIKE’s Derby victory, his second in 11 years after using THE BOMBER to win the 2007 event within a month of debuting.

DRONE STRIKE faces almost the same field he beat a month ago at 12 furlongs – 10 runners from the Derby and four newcomers, who lack the class to deny him Lynch’s runner.

MARQUESAS, who had started as the Derby favourite with Shane Ellis, should again run a great race but the manner in which he was beaten by DRONE STRIKE suggests he will find it hard to turn the tables.

Drones to be acquired to combat praedial larceny – Hutchinson