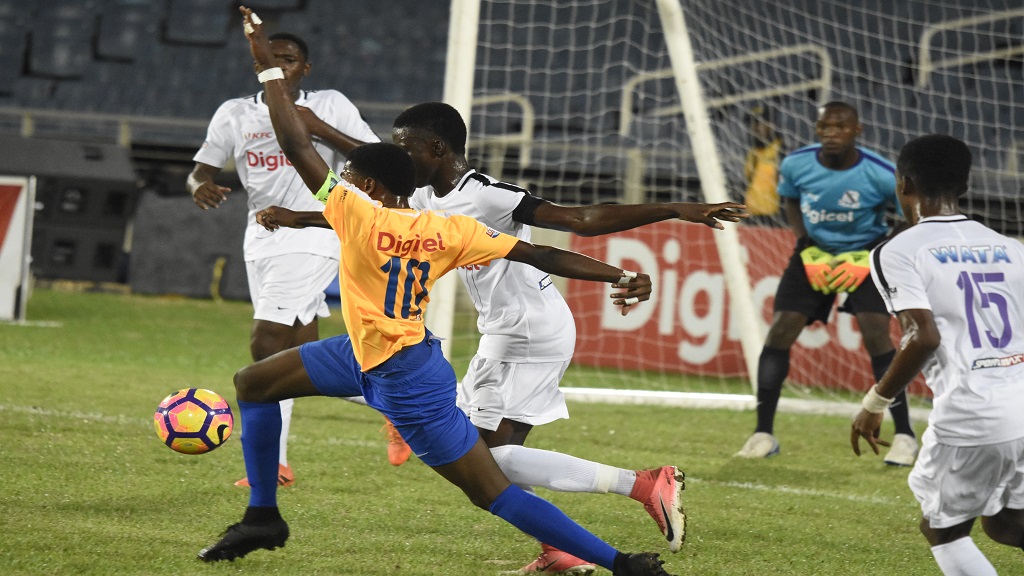 A new champion will be crowned in the 2018 ISSA rebranded Champions Cup as St Elizabeth Technical High School (STETHS) ended the reign of Kingston College (KC) on day one of the all-island knockout competition on Friday.

STETHS got home courtesy of a 6-5 sudden death penalty shoot-out win in the second match of a doubleheader at Sabina Park.

The dreaded penalty was used to separate the teams after they battled to a 1-1 draw at the end of full time.

Victory was sweet revenge for STETHS who lost 3-0 against KC in the final of the competition, which for the first four years was called Super Cup before the all-island knockout competition was rebranded this season with a new trophy.

Earlier, KC had to come from behind to force the penalty shootout.

Garwood put STETHS 1-0 ahead in the 29th minute from the edge of the 18-yard box.

Green set up the goal when he played back a ball from the right side of the field and Garwood latched onto it and easily played out of the reach of KC's goalkeeper Devonte Bancroft.

KC should have equalized six minutes later but the gifted Reid found the far post with goalkeeper Clarke well beaten.

The defending champions finally got the equalizer and it came moments after the introduction of Atkinson and Rodgers.

A moment of brilliance from Morrison after Rodgers was fouled levelled the scores. The KC striker curled a 25-yard free-kick around the defensive wall of STETHS and into the top corner of the goal. It was the fifth goal for Morrison this season.

Reid should have won the game for KC in the 88th minute when he was set up by Rodgers inside the box, but missed with Clarke at his mercy.

It was the first defeat for KC this season.

The Ludlow Bernard-coached has reached the semi-finals of the Manning Cup with an impressive record of 13 victories and two draws from 15 games.

The remaining six games in the first round will take place on Saturday with doubleheaders at three venues – Catherine Hall Complex, STETHS and Stadium East.