Stand up for your rights, Terrelonge tells children 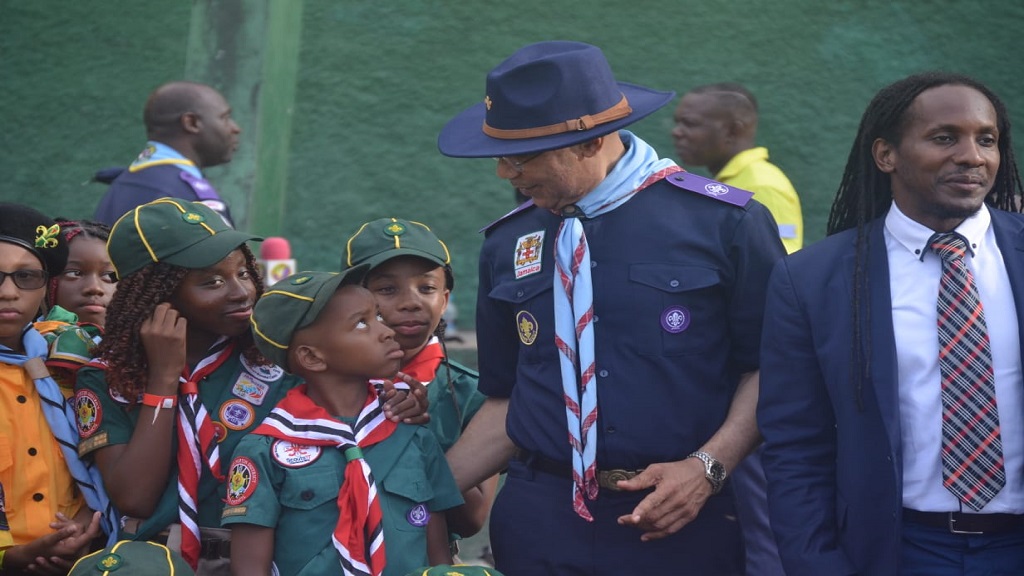 Governor General Sir Patrick Allen (second right) has the attention of Scouts Caribbean Cuboree at the Ocho Rios High School in St Ann on Tuesday. Minister of State in the Ministry of Education, Youth and Information, Alando Terrelonge is at right.

Minister of State in the Ministry of Education, Youth and Information, Alando Terrelonge is reminding children of their right to ensure that they are not being ill treated.

"I want you to consider your physical health and well-being and know that, as children, you have the right to ensure that no one beats you, no one ill treats you, no one abuses you," Terrelonge stated.

He added: "You have the right to education, to food, to clothing, to a loving and stable home where you are also protected."

Terrelonge underscored that Government's strong insistence on the banning of corporal punishment is to protect children from being ill treated.

"And so when we speak of banning corporal punishment, we speak about it because we don't want anyone to abuse or ill treat any of you," the state minister outlined.

He expressed awe "that more than 80 per cent of our Jamaican children either experience violence physically, personally, or have witnessed it - and the trauma from those situations affects their mental well-being, and it affects their development".

"And so I want you all to recognise that you do have these rights. And if anyone wants to ill treat you, let them know that, even though you are a child, that you have the right to be protected. Have the conversation with them and educate them also," he argued.

He was speaking at the opening ceremony of 15th triennial Caribbean Cuboree at the Ocho Rios High School in St Ann on Tuesday.

The event, which started on Tuesday and will climax on Monday, August 5, is being held under the theme, ‘Cubbing – A new Universe of Fun’.

Over 800 scouts - ages ranging from seven to 11 - from eight Caribbean territories, including Jamaica, are in attendance at the event which is also being attended by Governor General and Chief Scout of Jamaica, Sir Patrick Allen.