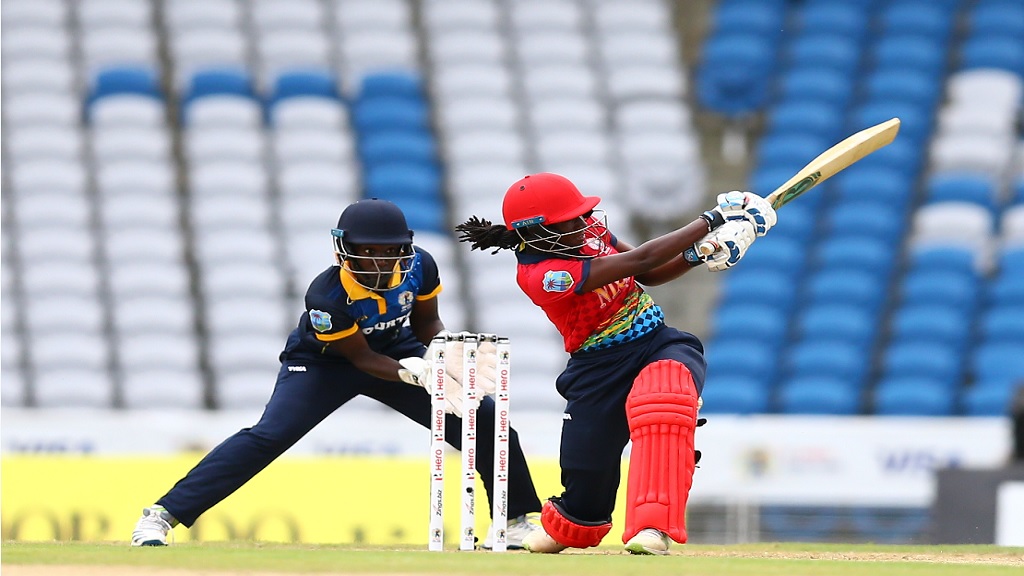 Stafanie Taylor of the NLCB Revellers hits a boundary during the CPL Women’s T10 NLCB Challenge clash against Courts Gladiators at the Brian Lara Cricket Academy in Trinidad and Tobago on Thursday, October 10, 2019.

The Gladiators recovered from a slow start to post what looked a challenging 74 for two from their 10 overs on the back of Hayley Matthews’ unbeaten 46.

With the pitch a touch slow and boundaries playing to their full size, it promised a tough chase for the Revellers, but Taylor made light work of it leading her team to 78 for two off 9.2 chasing a victory target of 75.

Stacy-Ann King and Britney Cooper got the Revellers’ run-chase off to a steady start, but when King was trapped lbw by Gladiators captain Afy Fletcher for 15 it was the Taylor show.

The Jamaican cut her second ball to the point boundary to set the tone for what was to follow.

Taylor continued to find the boundary with ease and, combined with some hard-run twos, raced to 36 from 17 balls before falling with the scores level looking to smash the winning runs and finish the game in style. That handed a wicket to Matthews, to go with her unbeaten 46 earlier in the day.

The game was well won by then, with Cooper stepping up from the support role to smack the second ball of the final over straight back over the bowler Shabika Gajnabi’s head for four and seal the victory in fitting style.

The Gladiators’ total was underpinned by a 54-run second-wicket partnership between Matthews and Kycia Knight. They batted with increasing confidence and fluency as the Gladiators recovered from the loss of Sheneta Grimmond for a duck, bowled by Caneisha Isaac.

Experienced West Indies pair Matthews and Kycia Knight held their nerve, though, and keeping wickets in hand enabled the Gladiators to accelerate from 27 for one at halfway to 74 for two after their 10 overs.

Matthews plundered seven fours and a six down the ground in an innings of real class and intelligence, while Knight also cleared the ropes on her way to 24 before being smartly caught low by Cooper to hand Chinelle Henry a deserved wicket.

Matthews led the way as 47 came from the final five overs to lift the final total beyond 70, but with Player of the Match Taylor in this form it proved short of what was required.

The two sides meet again in the Courts Invitational on Saturday afternoon ahead of the Hero Caribbean Premier League (CPL) final.