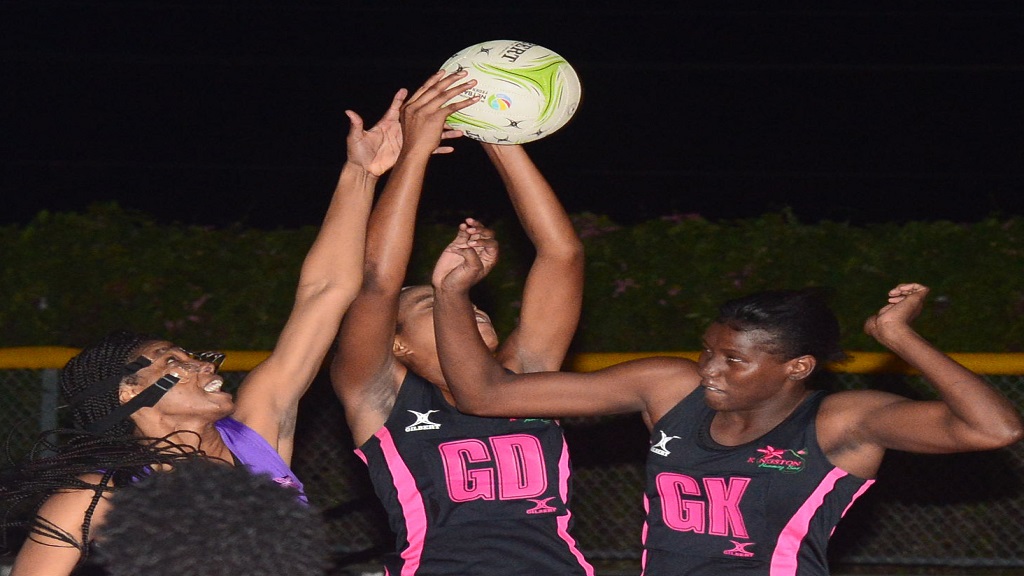 Identifying combinations is certainly a keynote for coaches in the opening round of matches in Netball Jamaica’s 2018 Berger Elite League.

That was a key assertion of coaches following the close finish in Thursday night’s closing game in the semi-professional championship with Jamaica’s best netballers. St James Sharpes succeeded in their unrelenting chase to catch Clarendon Gaters down the stretch and win 42-39 at the Leila Robinson Courts.

It was a battle among teams never to have trained even once this season.

“The first match, the first meeting, the first training,” admitted St James Sharpe’s head coach, Phyllis Thompson. “Few of the girls are playing inter-collegiate games and with traffic and so forth it’s a little difficult (to get them to train). We’ve been talking a lot on the phone.”

“We have new players on this team so we’re looking at the combinations that work best. When we met Tuesday night at the opening ceremony we had a little chit chat and we were pin-pointing some characteristics of the Sharpes team – tough, resilient, happy with each other, family oriented, trustworthy, things like that and certainly, we’re a happy bunch, we’re a happy team,” Thompson continued.

With Kestina Sturridge in good shooting form, St James Sharpes beefed up that good vibe with a successful finish.

For Clarendon Gaters Amanda Pinkney, with 20 goals from 31 tries and Shedeiky Hamilton-Barnes, 19 from 24 attempts, scored seemingly at will until anxiety took over their game towards the end.

Still, head coach Dalton Hinds never made a fuss over their crumbling.

“It’s the first time we’re meeting as a team, well done to my ladies,” Hinds said.

“Actually what I’m looking at is the different combinations. It just never worked out this evening, unfortunately. It’s a good look at least for a start, even though we’ve lost it’s like a victory because we played better than the opening we had the last time,” he analysed.

Sturridge was happy for her role in reeling them in.

“I’m proud of my team because we never gave up,” said Sturridge.

“I feel great inside to know that I performed well in tonight’s game, so I’ll have to come prepared for the other games. It’s just the start so we have to go back, do our homework and come back ready for the other game,” added Sturridge.

In the opening match of the double-header, Manchester Spurs registered a lopsided 53-35 win over St Catherine Racers.

The competition continues on Wednesday, November 21 with St James Sharpes vs Manchester Spurs at 6:30 p.m. and St Catherine Racers vs Kingston Hummingbirds at 7:45 p.m.