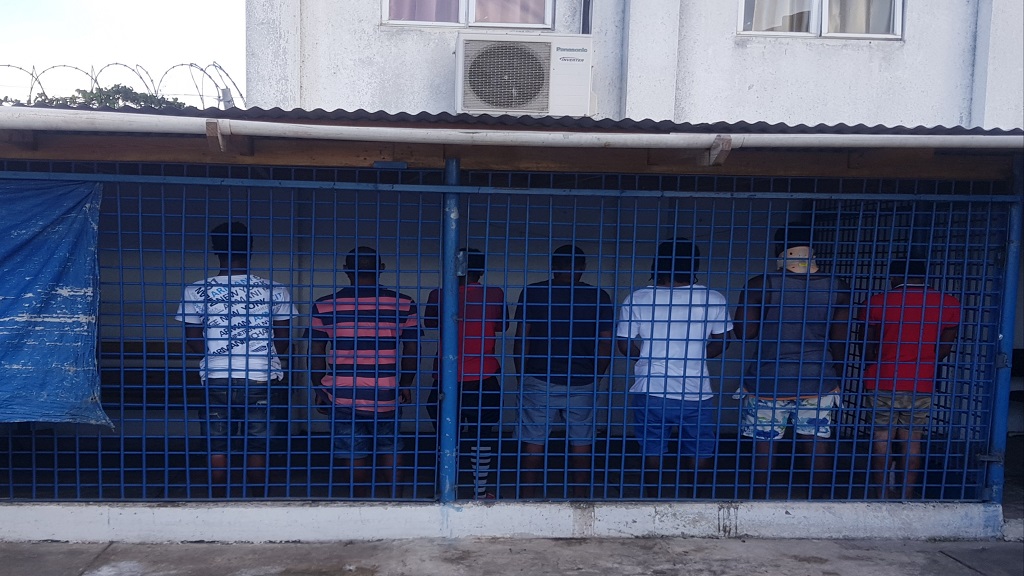 A distant photo of detainees in a state of emergency facility in St James.

The St James police are stoutly rejecting Public Defender Arlene Harrison-Henry's report in Parliament that detainees are being held in deplorable conditions under the state of emergency (SOE) in St James.

On Wednesday, acknowledging that conditions under which detainees were being held, in some instances, appalling, Justice Minister Delroy Chuck, while addressing justices of the peace (JPs) at a function at Sandals Resort in Montego Bay, apologised for the deplorable conditions that detainees are subjected to.

“The truth of the matter is that most of our detention centres, our jails, are in awful condition. Those of you who have to visit the police stations and the lock-ups see that they need improvement,” Chuck stated.

On Thursday, during a press conference at the Freeport Police Station in Montego Bay, following a tour of the detention area and bathroom at the facility, the police sought to bore holes into Henry's report.

Parliament was told by the public defender that 105 children up to the age of 17 years, were detained as of October 31, but Senior Superintendent of Police, Anthony Morris, the acting police commander for the St James SOE, contradicted the report.

SSP Morris said in the month of July, there were 13 children in lock-up, which was the most since January.

“At no time did we ever had that number of children in custody,” SSP Morris stated.

Turning to meals, SSP Morris claimed that the detainees were being fed the same meal as the police.

“We do not have much to do with a $300 that is paid to a concessionaire. However, the detainees there for the most part, eat from the same pot that the police eat from," he said.

A day earlier, the justice minister said he had given instructions that all holding areas must be improved to some decent levels.

“I am now instructing my ministry that all these holding areas must not only be fit for (detainees)… if I am detained, I can sit down there. It must be air-conditioned, because I like air condition, and police officers have to sit in there. And the toilet facilities must be of a high standard that if I need to use it when I visit there, I can use it,” Chuck stated.

Murders down 68% in St James