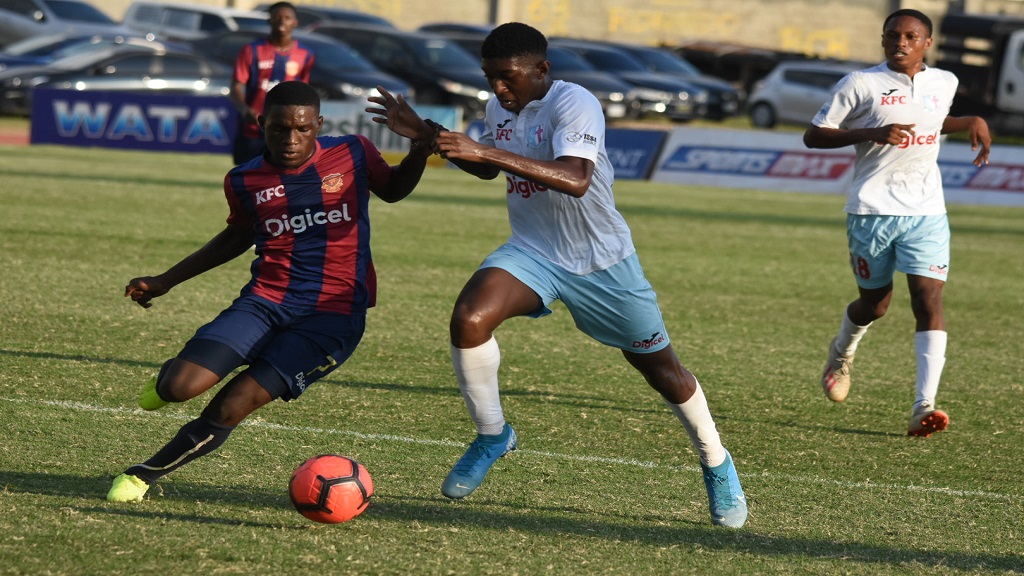 St George’s College eliminated defending champions Hydel High at the quarter-final stage of the 2019 ISSA Walker Cup Knockout competition by securing a 2-0 victory at the Stadium East field on Friday.

The victory in the second game of a double-header at the venue, pushed St George's College, a nine-time champion, into the semi-finals, three days after they were eliminated from the ISSA/Digicel Manning Cup football competition at the quarter-final stage.

St George’s College dominated Hydel High but were unable to secure the goals until the second half.

A good build-up that ended with a one-two combination between Jaheim Brown and Chantomoi Taylor led the Neville ‘Bertis Bell-coached team to the opening goal in the 52nd minute.

Brown set up Taylor and he found the back of the net to secure his 20th goal of the season.

St George’s College doubled their advantage in the 67th minute when Hydel High’s Jesean Gordon put the ball into his own net. That happened after Taylor turned beautifully to play inside the six-yard box and Gordon, trying to keep a St George’s College's striker from securing the advantage committed the serious mistake of beating his own goalkeeper – Shaquan Gordon.

It was a very bad day for Jesean Gordon who received a red card in time added on.

St George’s College will play St Catherine High in one semi-final, while Excelsior High and Camperdown will face off in the other.

St Catherine High booked their spot following a 3-0 victory against Charlie Smith High in the opening game of a double-header at the Ashenheim Stadium on the grounds of Jamaica College.

In the second quarter-final game of the double-header, Excelsior High defeated Jonathan Grant 4-2 on penalties following a 2-2 draw in regulation time.

Camperdown High secured their spot by whipping Mona High 4-0 in the opening quarter-final game at the Stadium East field.

Meanwhile, the semi-finals of the ISSA all-island Champions Cup will take place on Saturday at the National Stadium.

Defending champions Cornwall College will face Clarendon College in the first match at 4:00 pm, while Kingston College and Jamaica College will contest the second game at 6:30 pm.