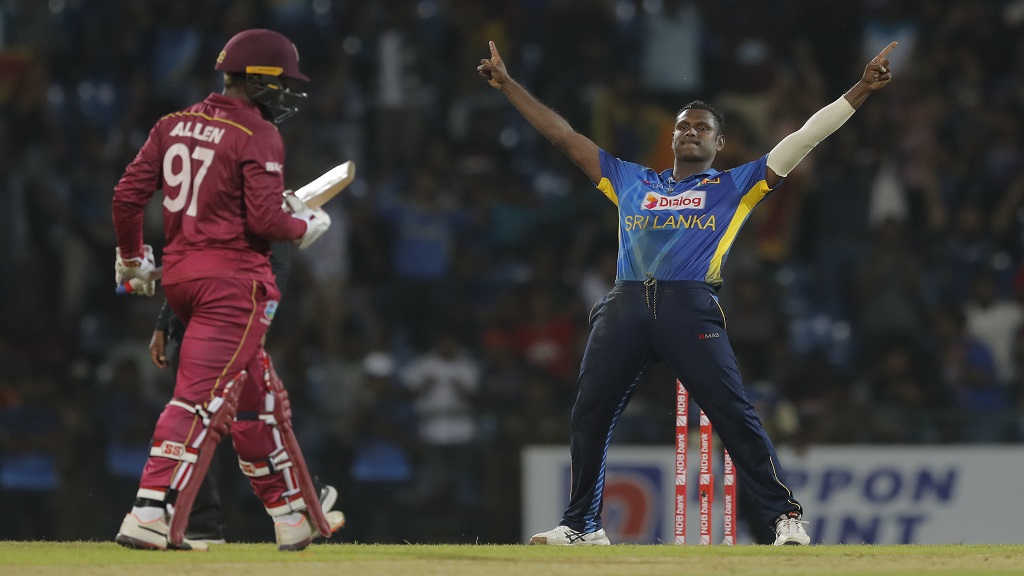 Sri Lanka completed a series sweep over West Indies as Angelo Mathews held his nerve in the final over to clinch a six-run victory in the third ODI.

Replying to the home team's total of 307, West Indies appeared on course in their chase when they reached 171-1 during the 31st over, Shai Hope leading the way with 72.

Sunil Ambris had made 60 during an opening stand of 111 with Hope, who continued his fine run of form during the tour before chipping Isuru Udana to midwicket.

The tourists were left needing 13 from the final over and despite a boundary off the first delivery, Fabian Allen's departure for a quick-fire 37 was crucial. All-rounder Mathews gave away just three more runs to finish with 4-59.

Kusal Mendis and Dhananjaya de Silva had earlier hit half-centuries for Sri Lanka, with the top eight in their order all reaching double figures before they were bowled out from the final ball of the innings.

After Karunaratne was caught and bowled by Roston Chase at the start of the 20th over, Kusal and Mendis – who made 55 - combined in an 89-run stand for the third wicket. While the pair fell in successive overs, their partnership was key to setting up a sizeable target on a sluggish surface.

Dhananjaya hit five boundaries in his knock of 51 that spanned 47 deliveries and Thisara Perera made 38 in the closing stages, the duo adding 64 for the sixth wicket.

Alzarri Joseph dismissed the pair in the closing stages on his way to figures of 4-65, taking his tally of wickets in the three-match series to 10.