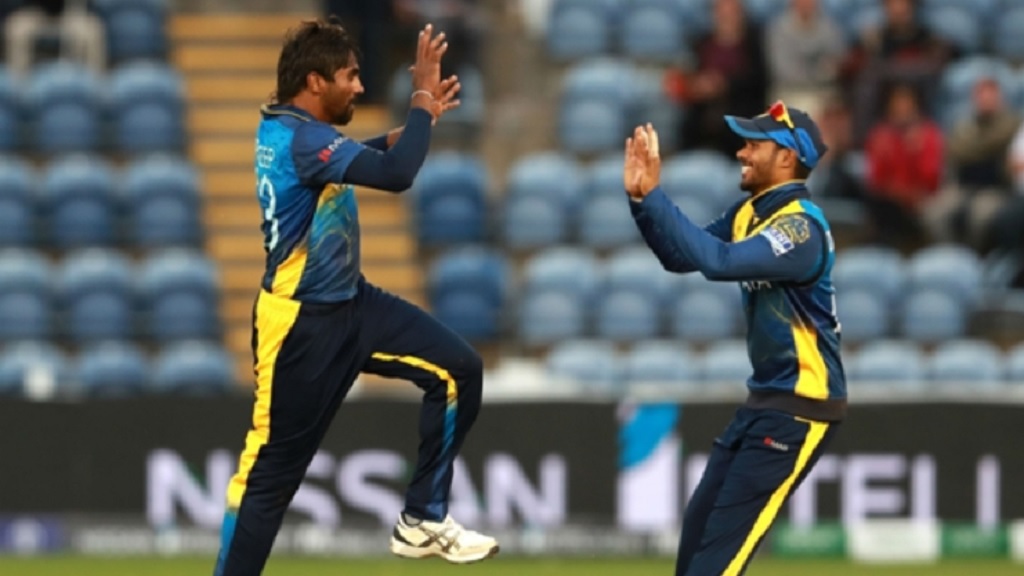 Nuwan Pradeep celebrates one of his four wickets against Afghanistan.

Nuwan Pradeep was Sri Lanka's hero as they put an embarrassing collapse behind them to beat Afghanistan by 34 runs on the Duckworth-Lewis-Stern method in a dramatic Cricket World Cup encounter in Cardiff.

Having been invited to bat first, Sri Lanka slumped from 144-1 to 201 all out either side of a rain delay on Tuesday, losing three wickets in one over from Mohammad Nabi (4-30) as their innings fell apart.

However, Pradeep then played a key role in ensuring Afghanistan were unable to reach a revised target of 187 from 41 overs, the seamer returning career-best figures of 4-31 to help Sri Lanka to a much-needed victory.

Two Lasith Malinga yorkers, either side of key batsman Najibullah Zadran being run out for 43, brought an end to Afghanistan's chase as they were dismissed for 152.

In the end, the underdogs ultimately paid the price for a terrible start with the ball, which saw them ship 52 runs in the first five overs including 17 extras.

The outstanding Nabi broke an opening stand of 92 between Kusal Perera and Dimuth Karunaratne by having the Sri Lanka captain caught at long-on, before then ousting Lahiru Thirimanne, Kusal Mendis and Angelo Mathews in a remarkable 22nd over.

Sri Lanka continued to crumble either side of a lengthy rain break, with Perera's 78 the only innings of note, but Afghanistan were soon in trouble chasing as they slipped to 57-5 with Pradeep striking twice.

A gutsy sixth-wicket stand between skipper Gulbadin Naib (23) and Najibullah took Afghanistan to within 66 of their target, but Pradeep trapped the former lbw and also accounted for Rashid Khan before Malinga finished the job in trademark fashion.

What does it mean? Sri Lanka with much to do despite welcome win

This was only Sri Lanka's second victory in 12 ODIs in 2019, the other having come against lowly opposition in Scotland last month.

While any success is to be welcomed in such circumstances, it is clear the 1996 world champions need to improve significantly to have any chance of making the semi-finals.

Their next two matches, both in Bristol against Pakistan and Bangladesh respectively, feel like must-win games if Sri Lanka are to spring a shock.

Cardiff hoodoo over for Sri Lanka

At the sixth time of asking, Sri Lanka have finally won an ODI in Cardiff.

Prior to Tuesday's nerve-jangling triumph, they had been beaten by New Zealand (twice), India, England and Pakistan in Wales' capital.

Nabi certainly did not deserve to be on the losing side. There will be few better overs in the tournament, if any, than the one he delivered to dismiss three Sri Lankan batsmen.

Thirimanne was bowled via an inside edge before Nabi had Mendis and Mathews caught at slip for ducks, breathing life into a contest that had looked set to be one-sided.