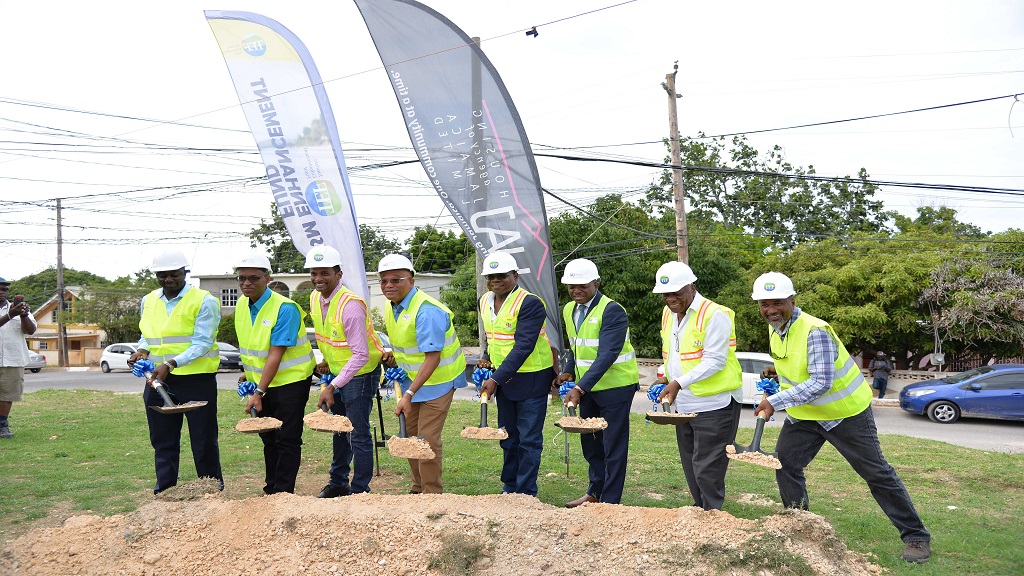 The official groundbreaking for the Grange Pen upgrading project in St James on Friday.

The largely squatter community of Grange Pen in St James has been earmarked for an almost $1 billion improvement under the Tourism Enhancement Fund (TEF) Resort Squatter Settlements Upgrade Project.

Tourism Minister and Member of Parliament (MP) for the constituency in which the development is slated to take place, Edmund Bartlett, made the announcement at a groundbreaking ceremony for the project on March 29. He said the project was started in 2010 as part of the then Government’s mission to provide housing solutions for workers in the tourism industry through the TEF.

“We are going to be building a level of development that you have never seen before in this parish… We have proposals for participants, requests for proposals out for public-private participation for us to build those houses for the people, primarily workers of the tourism industry,” he said.

The Housing Agency of Jamaica (HAJ) will oversee the infrastructural upgrade for the regularisation of 535 households in the community. This is equivalent to approximately 8,000 square feet per lot.

The project is scheduled to take place over a 24-month period, and is to include road scribing and paving, draining infrastructure, construction of a sewage treatment plant, supply connection to the National Water Commission (NWC), electricity distribution, and land titling.

A highway is also to be created from Grange Pen through Barrett Hall to Greenwood, signaling the next phase of the development for the area. Bartlett also shared that upon completion, the community of Grange Pen will be renamed.

Minister without Portfolio in the Ministry of Economic Growth and Job Creation, with responsibility for housing, Senator Pearnel Charles Jr, added that, “it is perhaps everyone’s dream to own their own home… It is my responsibility now to be the one to ensure that I drive the processes of accountability to make sure that we are providing the housing that is necessary to all communities across this country.”

He also stated that it is the Government’s goal to provide for low to middle-income earners by “giving them improved access to mortgages, so that they can be able to go through the financing that is required to access the housing that will be provided across communities.”

Bartlett also announced that a major tourism development is in the works for Lilliput, which is to bring significant economic benefits to the people in Montego Bay.

“We have concluded much discussions, the purchase of the land has been completed in Phase 1, and Phase 2 is also being completed with the Rolling’s family. We will have close to 4,000 additional rooms, which will require a level of service from the people in this area.

“The way forward for us is an integrated, involved and inclusive tourism, where the hotel developments and the communities are going to be one in the same,” said Bartlett.

Chairman of the HAJ, Norman Brown, and Councillor Anthony Murray from the St James Municipal Corporation, welcomed the development project in Grange Pen as an important initiative which should significantly transform the community.

As part of efforts to improve the look and feel of the local tourism product, the Ministry of Tourism, through the TEF, has so far invested $6 billion in Montego Bay and its environs. The works carried out by the TEF includes road rehabilitation, drain cleaning and housing solutions.

Earnings of US$3.6 billion expected from tourism