Tottenham's Serge Aurier celebrates before the goal he scored was disallowed after a VAR decision during the English Premier League match against Leicester at the King Power Stadium in Leicester, England, Saturday, Sept. 21, 2019. (AP Photo/Leila Coker).

Harry Kane's brilliant improvised finish saw Spurs head into half-time with the advantage on Saturday but a spirited Leicester, who had seen a Wilfred Ndidi goal chalked off early on, fought back following the interval.

After a Serge Aurier effort had been ruled out by VAR due to the tightest of offside decisions, Ricardo Pereira got the Foxes back on level terms when he arrived to convert Jamie Vardy's low cross.

Leicester's comeback was then crowned when the impressive Maddison struck from distance five minutes from time. 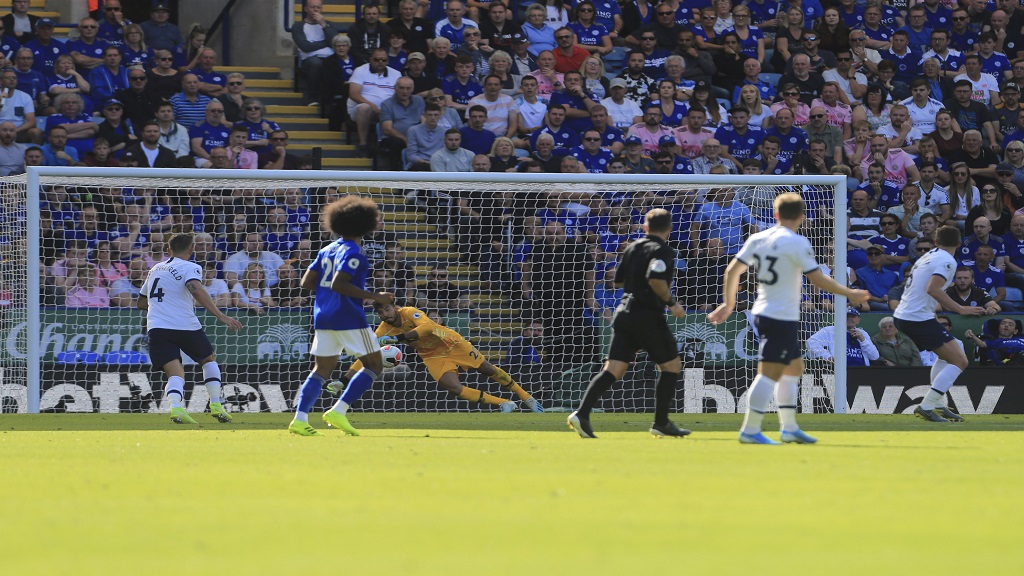 The result means Tottenham have still not won an away game in the Premier League since January, while Leicester climb above them into the top four.

Maddison's quick feet lit up the early stages. Twice the Leicester playmaker weaved his way into the box, first curling wide and then forcing goalkeeper Paulo Gazzaniga to make a low diving save.

Gazzaniga had a fortunate escape moments later when he parried a low angled drive from Youri Tielemans and Ndidi scrambled the rebound home. However, to the ire of the home supporters at the King Power Stadium, referee Paul Tierney's decision to consult VAR technology saw it ruled out on review because of offside.

Spurs took the lead against the run of play with a superb bit of quick thinking from Kane after he latched on to a clever backheel from Son Heung-min. The England international was nudged off balance by Caglar Soyuncu, sandwiched between two Leicester players, and did not have the ball under control yet managed to hook a shot past Kasper Schmeichel as he stumbled to the ground.

Tottenham thought they had a second goal when Aurier's deflected shot nestled into the bottom-left corner of the net. However, VAR deemed Son was offside by the narrowest margin and moments later Leicester were back on level terms when Pereira arrived in the area to meet Vardy's cross and stab the ball home.

Maddison then secured the points for Brendan Rodgers' side when the ball was laid off by substitute Hamza Choudhury and he wrapped his foot around it and found the bottom-left corner.

What does it mean? Spurs lack away day grit

Leicester have been touted as a team to ruffle a few feathers this season and they enhanced their top-four aspirations with a gritty victory. The Foxes were winless in their last 45 Premier League games in which they had been behind at half-time, since a 3-2 win over West Brom in October 2015, but this showed a growing resilience under Rodgers.

Tottenham are now winless in nine Premier League away games with two draws and seven defeats, their worst run since a 10-game streak in 2006.

Maddison needs to continue to get goals

For all the invention James Maddison has needed to add more goals to his game. He was a box of tricks against Tottenham and this time he was able to get his name on the scoresheet. The Leicester playmaker must use this as a platform to get more goals.

Paulo Gazzaniga only started in goal because Hugo Lloris was absent to be at the birth of his daughter and had an afternoon to forget. There was little Gazzaniga could do about the two goals but he produced a largely shaky display. France international Lloris cannot come back soon enough for Spurs fans.

- There were two goals disallowed by VAR in this match. No other game in the Premier League in 2019-20 has had more than one chalked off.
- Tottenham have failed to win three consecutive away Premier League games when they were leading at half-time, for the first time since March 2008.
- Leicester have suffered just one defeat in their last nine Premier League home games (W6 D2), after losing four in a row directly before that.
- Since the start of last season, Kane has scored 13 Premier League away goals, more than any other player in this period.
- Maddison ended a run of 31 shots in the Premier League without a goal, since netting versus Huddersfield in April.

Both teams have tricky away ties in the third round of the EFL Cup on Tuesday. Tottenham head to Colchester United while Leicester travel to Luton Town.