Spice dares Nuffy to sue her, but ‘olive branch’ being eyed both ways 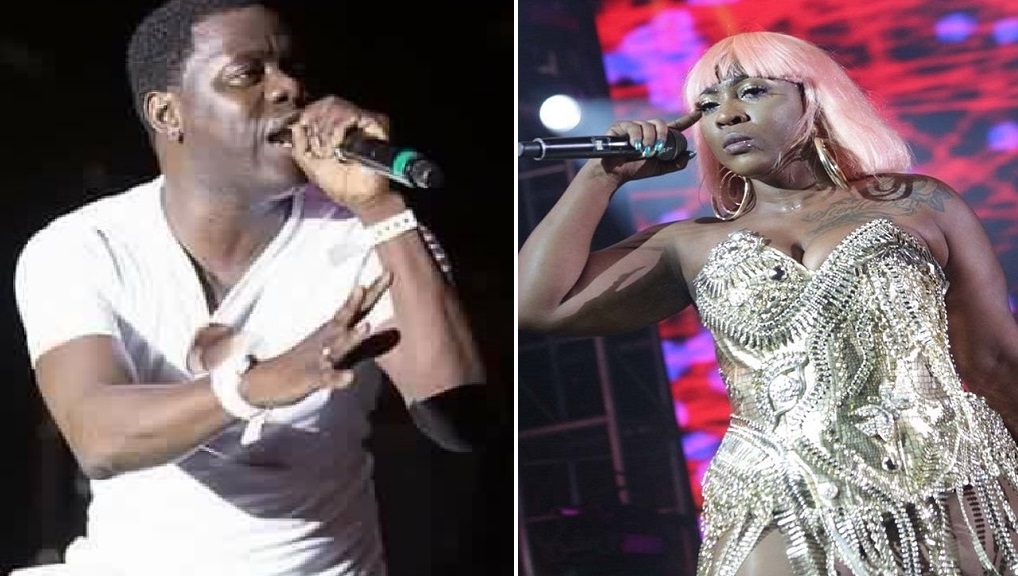 Jamaican dancehall star Spice has upped the ante in a war of words with popular Jamaican emcee, Andrew 'Nuffy' Nelson, vowing to counter-sue if he carries through a threat to take legal action against her for recent statements she made about the emcee on social media.

Spice has also instructed her legal team to prepare a robust defence of her recent statements about Nuffy, with whom she has had numerous run-ins over recent years.

Spice has retained the law firm of Townsend, Whyte and Porter, which now stands ready to defend the statements she made about Nelson, including assertions of drug trafficking and being a child molester.

The law firm has released a statement which stated that Spice, whose real name is Grace Hamilton, planned to rigorously defend her interest, and will counter-sue to seek damages for any assertions that have allegedly been made about her by Nelson in the past.

"We have instructions to counter-sue for the multiple defamatory statements (allegedly) made by Mr Nelson concerning Ms Hamilton. Of particular consternation to our client are the boorish and false comments he (reportedly) has made about being in a relationship with her, among other things that have been bandied about…  (on) social media," the statement from the law firm said.

Last week, during an Instagram Live update, Spice accused Nelson of being a child molester and drug trafficker. The comments led to the emcee threatening to sue her for defamation, ramping up the stakes in their ongoing 'war of words'.

"No papers have been served on Ms Hamilton, despite these threats. In any event, the truthfulness of any comment made by her is a complete defence. We have instructions to accept service of any documents filed by Mr Nelson. But we ask all concerned to be mindful that if Ms Hamilton is challenged by way of a lawsuit for defamation, then she will be forced to react by putting forward the elements of proof required. In doing so, it might involve third parties and lead to uncomfortable results," the statement from the law firm said.

The statement further warned that "the kind of (supposedly) criminal offences that are being alleged have no statute of limitations on them".

Additionally, the statement declared that: "… with respect to one of the (supposed) offences, once a report is made to the Centre for the Investigation of Sexual Offences and Child Abuse (CISOCA), it (the report) has to be investigated."

When contacted on the development, Nelson scoffed at what he called the "ridiculous" allegations against him.

Despite the heated rhetoric both ways, there is hope for an out-of-court reconciliation of the dispute, as Hamilton's lawyers agreed to extend the proverbial ‘olive branch’ to Nelson.

"If he wishes to speak to us, we will be more than happy to speak with him and his counsel. Of course, practitioners at the bar are mindful that once suit is filed, a matter becomes sub judice, meaning that comments thereafter are to be limited," the statement from the law firm said.

Nelson's lawyer, Ludlow Black, last week pointedly declared that his client's reputation had been damaged by the statements from Spice, and demanded an apology while citing the perceived relevance of monetary compensation for Nelson.

"We want an apology, but compensation is something we are very interested in as well. I believe his reputation has been significantly tarnished both locally and abroad," Black said.

He alluded to the scale of Spice's Instagram audience, which reportedly numbers in excess of one million, and said that "it is clear that Mr Nelson's reputation has been significantly tarnished, but we are at a point of assessing how much we would want."

Additionally, he said: "It's straightforward defamation of character, which doesn't need to prove damages. He has a strong case for slander."

However, Black has since said both he and his client are open to relating to the 'olive branch' from Spice’s team, to discuss the incident and bring closure to the matter.

"We are willing to meet and discuss privately with him and his client and explore options that will bring closure to this matter, and which will yield a result which both parties will feel comfortable with," Black indicated.