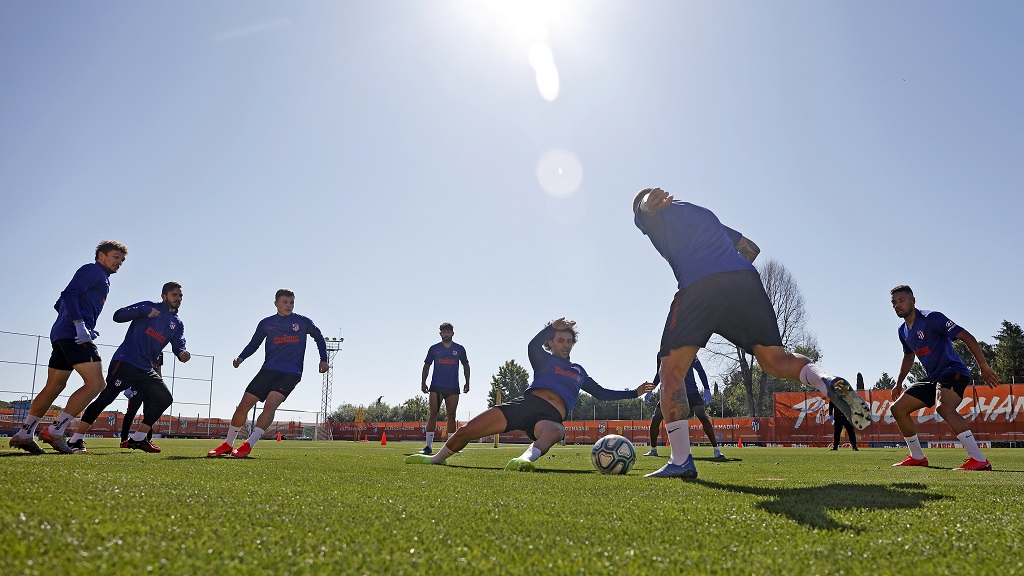 In this photo provided by Atletico Madrid, team players take part in the first group training session in Madrid, Spain, on Monday May 18, 2020. All Spanish league clubs can begin group training sessions this week despite stricter lockdown restrictions remaining in place in parts of Spain because of the coronavirus pandemic. (Atletico de Madrid via AP).

Spain’s top sports government official says fans may be back in football stadiums beginning next season.

Irene Lozano, president of the Spanish Sports Council, believes that conditions could be in place by the fall to allow fans back, with some restrictions.

“We haven’t ruled that out,” she said in an interview with radio network COPE late Tuesday. “Depending on how the epidemic progresses and how the situation progresses, we can start looking into putting a certain number of fans into the stadiums next season.”

The Spanish league is expected to resume — without fans — on the second weekend of June, nearly three months after it was suspended because of the coronavirus pandemic.

“Right now, the main goal is to be able to finish this season,” she said. “And it is clear that the best option now is to do it with matches behind closed doors. But we have to take into consideration that as we return to a new normality, having fans back in the stadiums can be done, as long as we follow the health safety measures in place.”

Lozano said she expects only parts of stadiums to be filled at first, with social distancing guidelines and protective materials such as gloves and masks likely still required.

She said Spain wants to be seen as a model on how to organise sports events after the pandemic.

“Internationally speaking, Spain has led the way in safely organising sports events,” Lozano said. “We want to be at the forefront and export a model for this new era of safe sports. This will not be something difficult to do. We will find this model, which now will need to take into account a lot of safety measures and guarantees, and which will obviously have to account for having fans in the stadiums.”

Lozano said the government is considering allowing the media to cover matches on site this season.

“I'm aware that the league is a relevant event that has to be covered by all the media,” she said. “We are looking into everyone that needs to be in the matches, almost to try to create a capsule and guarantee that the epidemic won't spread, and we are seriously considering allowing journalists to be in the league matches. Technically, we think it's possible to do that maintaining distancing guidelines.”

Lozano said all Spanish league clubs are expected to be allowed to resume full squad training sessions beginning next week even though not all parts of the country will be under the same confinement restrictions.

“That was solved from the start when Madrid and Barcelona were stuck behind,” she said. “The first thing was to guarantee everyone’s health, then the priority was to guarantee the integrity of the competition.”

Lozano also said it was important that the Sevilla players who broke confinement rules in a gathering with a large group of people last week promptly apologised.

“They know they made a mistake,” she said. “We can't allow for a careless attitude to put everyone's health at risk. The players have to be aware that they are a model to everyone."

The Spanish football federation on Wednesday said it would allow games to be played on Mondays and Fridays until the end of the season even though a judge denied the league’s official request to play on those days.

League president Javier Tebas has said he wanted matches to be played every day, but the federation had been against the idea.

The federation said it “wants to clearly show its good will” and is also willing to extend the exception into the beginning of next season depending on how the pandemic progresses and if games will continue to be played without fans.