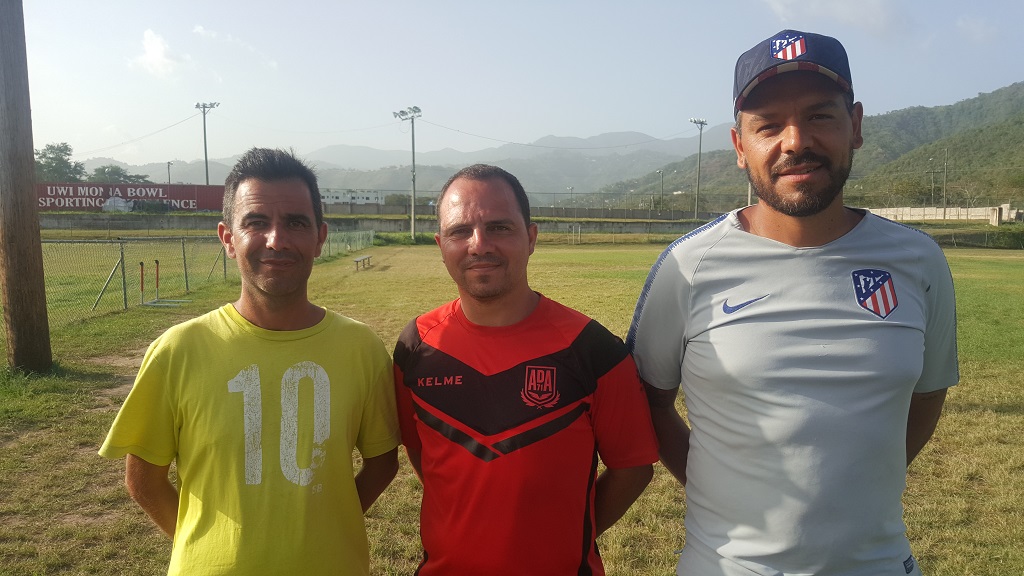 Photo shows three of the international contributors who were part of the Valeo FC/KSAFA Summer Coaching Academy. From left are scout Dario Castelo and coaches Miguel Misis and Sergio Recas.

Developing young players with proper football culture will enhance opportunities for Jamaicans to earn contracts with clubs in elite leagues such as Spain’s La Liga.

This view was shared by a number of the international contributors at the 2019 Valeo FC/KSAFA Summer Coaching Academy. These include a leading juvenile trainer from one of the world’s top football clubs, one of Atletico Madrid’s Under-16 and Under-17 coaches, Sergio Recas; an Under-15 coach at Spanish Second Division club A.D. Alcorcon, Miguel Misis; and juvenile scout, Spain’s Dario Castelo.

The academy ran for two weeks at the University of the West Indies Bowl, Mona, where coaches from giant Portuguese club, Sporting Lisbon, led sessions at the Valeo/KSAFA Summer Coaching Academy during the first week. Emelio Williams, President, Valeo FC Academy, and Fabian Davis, Valeo FC’s Jamaica Director, were among other coaches at the camp, which extended an open invitation to other local clubs.

After conducting sessions the second week, Recas, speaking through an interpreter, said: “We’re very enthusiastic to be here and we like what we see here. There’s good talent, motivation, everybody’s motivated, the kids, the coaches, the fathers, the parents.”

Recas shed pointers that may prove useful for clubs looking to properly get into the business of football when asked to comment on the difference in Spain when compared to Jamaica.

“It’s about the thinking of the game because here exists talent, but there doesn’t exist the habits of football,” said Recas. “Football, in our opinion, is not the number one sport here. In Europe, very soon the kids learn football, the coaches teach football tactics and help thinking for great football decisions on their head for game situations.”

Castelo says the future lies with the kids so all this can change in years, but coaching will make the difference.

“We think we’ve to give time to the kids, give time to the persons who are working with the kids and the future is in the small kids,” said Castelo. “I think in three, four years, it’s my personal opinion, I don’t have results, but three-four kids now, in eight, nine, 10 years when they become 15, 16, 17, they could go to our clubs. It’s just an opinion.”

The coaches had also participated in summer Coaching Camps at Valeo FC headquarters in Boston, Massachusetts.

“They worked with our boys to pass on some of the training methodologies that they use to develop the players,” said Williams, following the Sporting Lisbon camp.

Davis, a former Reggae Boy, who also played professionally in the United States, explained their contribution in depth.

“Valeo has been doing a lot of positive things, getting these coaches to come over and work with these kids here throughout the past two weeks. It’s been great working with them, said Davis.

Davis also said it is important to introduce certain aspects of the game according to age.

“They also explained to me the whole development process – 12 and Under is a lot of skills, 13 going up you want to help them to understand the game, which is game intelligence. Thereon you add more to the sessions of the kids the older they get, but it makes lots of sense; for the past two weeks the knowledge they’ve shared with us,” he said.