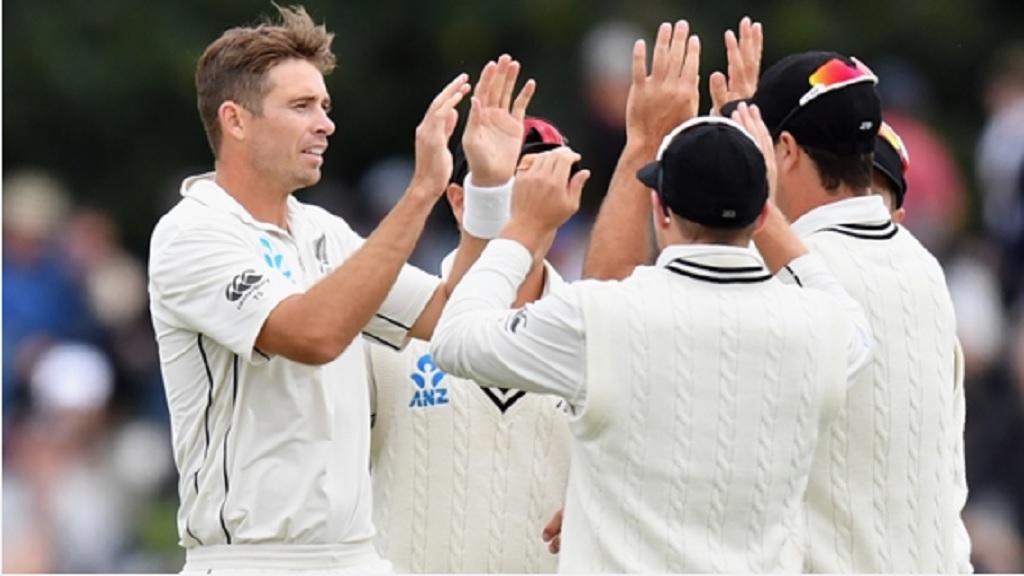 Tim Southee rescued New Zealand as 14 wickets fell on day one of his team's second Test against Sri Lanka in Christchurch.

Southee produced an important and aggressive 68 for the Black Caps, who were bowled out for 178 at Hagley Oval as Suranga Lakmal (5-54) starred.

The paceman then took three early wickets to bring the hosts – who drew the first Test – back into the game, Sri Lanka getting to 88-4, still trailing by 90 runs, at stumps on Wednesday.

But Angelo Mathews (27) continued his good form to be unbeaten at the close of play, although the Test remains balanced.

That had appeared unlikely when New Zealand stumbled after being put in to bat on a greenish wicket.

Lakmal removed both openers in Jeet Raval (6) and Tom Latham (10), the latter edging to Kusal Mendis at second slip.

He landed another big blow to get Kane Williamson (2) caught behind before bowling Henry Nicholls (1).

Ross Taylor (27) was unlucky, run out at the non-striker's end when Lahiru Kumara deflected a BJ Watling drive onto the stumps.

Colin de Grandhomme (1) chipped a catch to Dushmantha Chameera at midwicket off Kumara (3-49), before Lakmal's 16-over opening spell came to an end.

The Black Caps desperately needed a response from 64-6 and they got it from Southee and Watling (46).

The pair put together a 108-run partnership for the seventh wicket before Southee fell, and New Zealand's innings ended soon after.

Lakmal completed a deserved second Test five-for and grabbed his best ever figures as the Black Caps lasted just 50 overs.

The early blows saw Southee (235) move past Chris Martin (233) and into outright third for most Test wickets for New Zealand.

Mendis (15) also fell but Mathews and Roshen Silva (15) got through to stumps for Sri Lanka, who had been reduced to 21-3.