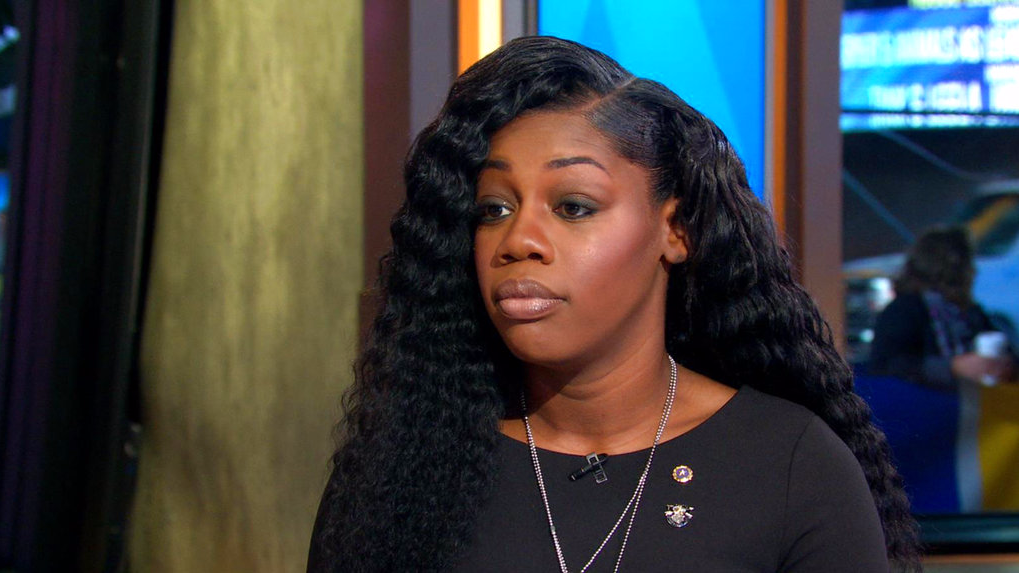 The widow of a fallen soldier criticized President Donald Trump Monday over his condolence call last week, saying she was angered by his tone and that he couldn't remember her husband's name. Trump quickly responded on Twitter that he'd been "very respectful" and spoke the name "without hesitation."

Monday's harsh exchange was the latest in an ongoing dispute over how Trump responded to the deaths of four service members in the African nation of Niger.

Myeshia Johnson, La David Johnson's widow, spoke on ABC's "Good Morning America." It was her first interview after a Democratic congresswoman accused Trump of being callous in the call by telling the widow that her husband "knew what he signed up for."

Johnson confirmed Wilson's account, saying the congresswoman was a longtime friend who was with the family in the car when Trump called Tuesday and listened on speakerphone. She said she had asked for the call to be put on speakerphone so relatives with her could hear.

"The president said that he knew what he signed up for but it hurts anyway," Johnson said. She added: "The only way he could remember my husband's name was he told me he had my husband's report in front of him and that's when he actually said La David."

Trump, who had accused Rep. Frederica Wilson of fabricating the statement, fired back on Twitter, saying: "I had a very respectful conversation with the widow of Sgt. La David Johnson, and spoke his name from beginning, without hesitation!"

But Johnson offered a different version.

The conflict drew criticism from Sen. John McCain, R-Ariz., who said on "The View" Monday: "we should not be fighting about a brave American who lost his life."

Johnson also said she has received little information about her husband's death and complained she has not been able to see his body.

"I need to see him so I will know that that is my husband. I don't know nothing they won't show me a finger, a hand," she said. "I know my husband's body from head to toe."

The four U.S. soldiers were killed Oct. 4 in Niger when they were attacked by militants tied to the Islamic State. Confusion over what happened has dogged Trump, who was silent about the deaths for more than a week.

Asked last Monday about his silence, Trump credited himself with doing more to honor the dead and console their families than any of his predecessors. His subsequent boast that he reaches out personally to all families of the fallen was contradicted by interviews with family members, some of whom had not heard from Trump at all.

The conflict continued Tuesday with Wilson criticizing the condolence call to Johnson. It escalated as she continued to attack the administration and Trump fired off insulting tweets, calling her "wacky" and accusing her of "SECRETLY" listening to the phone call.

White House Chief of Staff John Kelly entered the fray Thursday. The retired Marine general asserted that the congresswoman had delivered a 2015 speech at an FBI field office dedication in which she "talked about how she was instrumental in getting the funding for that building," rather than keeping the focus on the fallen agents for which it was named.

Video of the speech contradicted his recollection, however. And on Sunday Wilson asked Kelly to apologize. Speaking on MSNBC's "AM Joy," she called Kelly a "puppet of the president" and accused him of character assassination.

"Whatever Ms. Wilson said was not fabricated," she said. "What she said was 100 percent correct. It was Master Sgt. Neil, me, my aunt, my uncle and the driver and Ms. Wilson in the car, the phone was on speaker phone. Why would we fabricate something like that?"

Asked if she had a message for the president, Johnson replied: "No. I don't have nothing to say to him."

US park hikers may have died in 'sympathetic murder-suicide'