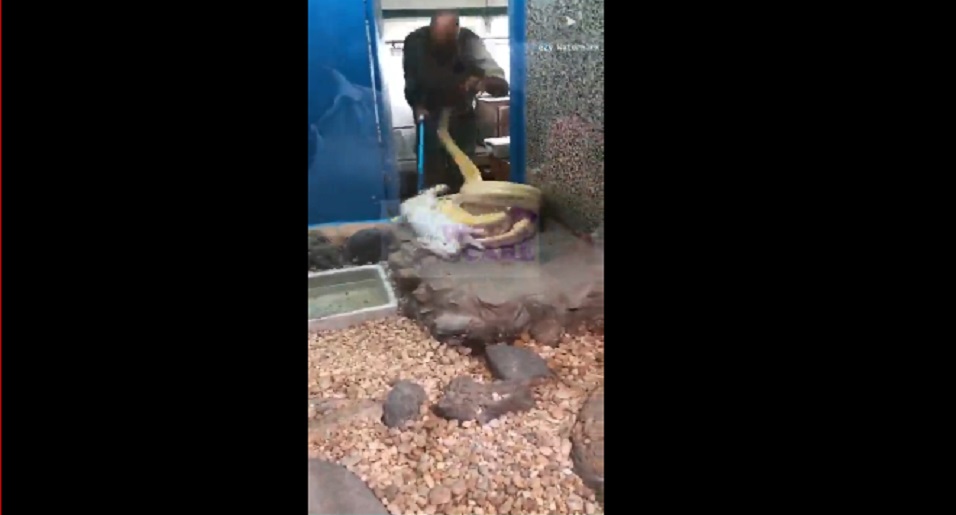 Patrons at the Emperor Valley Zoo got more than they bargained for when they witnessed an albino Burmese python nicknamed Mustard, bite his handler during his feeding time on Thursday.

A video on social media showed the zookeeper, Walter Bunyan, place a rabbit in the enclosure using a long stick. At first, the snake ignored his meal and the zookeeper climbed a staircase to move the rabbit closer to its mouth. It was then that the snake lunged at the handler, striking him in the lower abdomen.

Bunyan grabbed the snake by the head and stepped back as it held on and was dragged out of its enclosure. Reports say the man fell to the ground while the snake tried to wrap itself around him. He was eventually freed and rushed to the hospital after bleeding profusely. Meanwhile, Mustard was replaced into his holding to have his rabbit.

President of the Zoological Society, Gupte Lutchmedial, said it was unfortunate that Bunyan was so close to the snake with food in his hand. He said if you touch any prey, they will smell it on your hands. Lutchmedial added that established protocol was not followed and said they will have to reinforce more training. He said Mustard is a friendly snake and he is doing well.

The Zoological Society said, "The Emperor Valley Zoo confirms that an incident involving a snake and a Zookeeper took place today. The Zookeeper involved received immediate assistance from his "buddy" zookeeper who was present with him during the feeding, in keeping with a protocol which the zoo practices for certain animals. The snake's jaw was removed forthwith from his clothes and he is being treated for minor injuries on his stomach area. The management of the zoo is evaluating the circumstances which led to this incident so that further safety measures will be instituted if necessary."

According to Bransons Wild World, a wildlife park in Branson Missouri, the Albino Burmese Python is native to southern and southeastern Asia. They are found in tropic and subtropical areas, usually in trees and often near water and seem to be a semi-aquatic species. These pythons are carnivores and prey on birds and mammals. The snake uses its sharp rearward-pointing teeth to seize its prey, then wraps its body around the prey, at the same time contracting its muscles, killing the prey by constriction. Although pythons are typically afraid of people due to their high stature, and will generally avoid people, special care is still required when handling them.

Bunyan was treated for the snake bite and is said to be home resting.