Smith and Cummins star as Australia close in on retaining urn 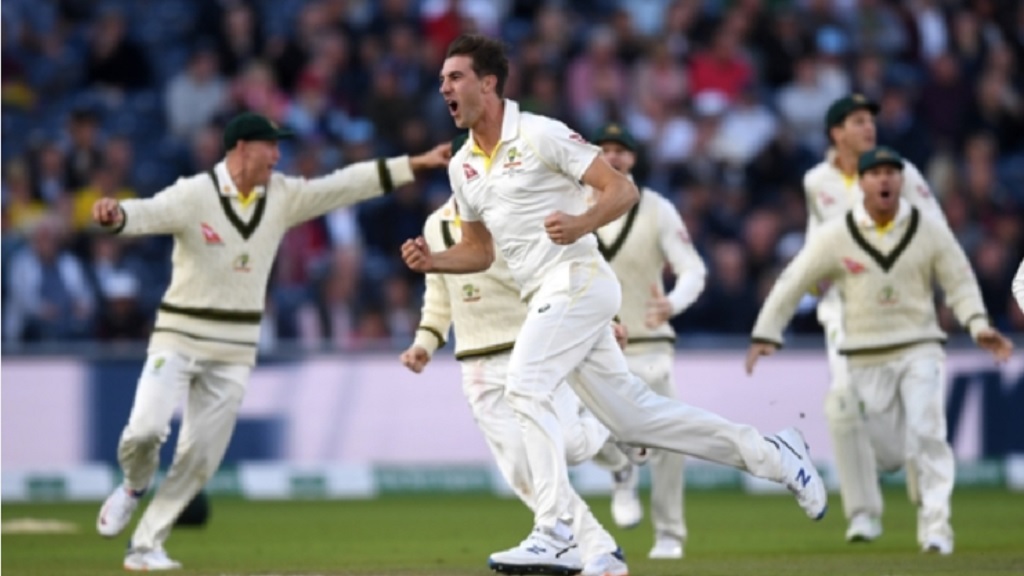 Australia closed in on a victory in the fourth Ashes Test that would ensure they retain the urn as Steve Smith again punished England, who were quickly reduced to 18-2 having been set 383 on day four.

Mitchell Starc, Smith and Pat Cummins each enjoyed their time in the spotlight on Saturday, with Australia reclaiming command of proceedings each time their hosts appeared to have been granted a glimmer of hope at Old Trafford.

The talismanic Smith - a double-centurion in Australia's first dig - then shone once more with the bat to stretch his side's advantage.

England reduced their opponents to 44-4 before Smith hit 82 off 92 balls - another wonderful innings yet incredibly his lowest score of the series to date - and Tim Paine declared on 186-6 in a bid to make swift progress against the fragile home top order.

Paine got what he wanted almost immediately as Cummins started with a double-wicket-maiden, dismissing Rory Burns and Joe Root. England duly stumbled through to stumps, three long sessions away from a draw that would keep the series alive - or, more unlikely still, requiring 365 to follow up their Headingley triumph with another stunning comeback victory.

In the morning session, England never truly recovered from the break up of the Burns-Root partnership on day three, with Starc getting movement out of the new ball to bowl Jonny Bairstow (17) before swiftly adding the big wicket of Ben Stokes (26).

Jos Buttler (41) was almost solely responsible for at least lifting England past the follow-on target of 298 before he fell to Cummins.

Australia then wobbled when batting again, with Stuart Broad continuing his domination of David Warner, trapping the opener for a third consecutive duck.

Broad kept the pressure on and got Marcus Harris (6) too, before Jofra Archer accounted for Marnus Labuschagne and Travis Head in a pacy spell.

However, Smith initially dug in and then came out firing after tea, surviving brief scares as he came close to dragging on and then almost fell to a stunning attempted catch from Stokes.

While other batsmen struggled for fluency, Smith was able to score freely with some increasingly expansive strokeplay. His attempts to lift the run-rate eventually gifted a wicket to Leach as Stokes was picked out at long-off.

Matthew Wade departed to a rejuvenated Archer, before Paine smashed a quick unbeaten 23 off 18 and then declared mid-over, teeing up Cummins to dish out some early damage.

Burns fell victim to the third ball when a leading edge looped to a sprawling Head at cover, while Root's defences were breached immediately by a gorgeous delivery that took off stump.

Jason Roy saw off the hat-trick ball and survived the remaining 6.2 overs alongside Joe Denly, but England's hopes of regaining the urn appear slim with a day to play.

Starc, recalled for this Test, is not always the most consistent of bowlers and struggled a little on Friday, ending the third day on figures of 0-41.

He proved his worth on day four with two huge early wickets in a new-ball spell. After bowling Bairstow through the gate with an inswinger, he tempted an edge from Stokes, who had scored 161 runs since his previous dismissal in the first innings at Headingley.

ARCHER BACK AT IT BUT SMITH SUPREME

Archer endured the first really tough innings of his international career earlier in this match, his figures of 0-97 including a gruelling spell bowling to Smith. The wicket of Labuschagne here came as a huge relief.

But that battle with Smith still provided Archer with little reward. Until his dismissal at the hands of Leach, the Australia star, a little like Stokes in Leeds, appeared to be in one-day mode as he blasted the ball around Old Trafford.

England were already in big trouble after losing Burns in the first over of their second innings. Their hopes of salvaging a draw receded sharply when the next ball from Cummins beat Root all ends up to leave the hosts 0-2.

- Broad has got Warner six times in this series.
- Warner has had three ducks in a row. Prior to this run, he had never failed to score in successive Test innings.
- Broad has nine wickets from openers this series. Cummins has the next most on six.
- Smith has five successive Test half-centuries - his best such run.
- The Australia star has scored 293 runs in this Test match; his highest tally in a match.
- Having completed their highest successful run chase (359) at Headingley, England need to achieve the feat again to win this contest.
- Burns' duck was his first in Test cricket.