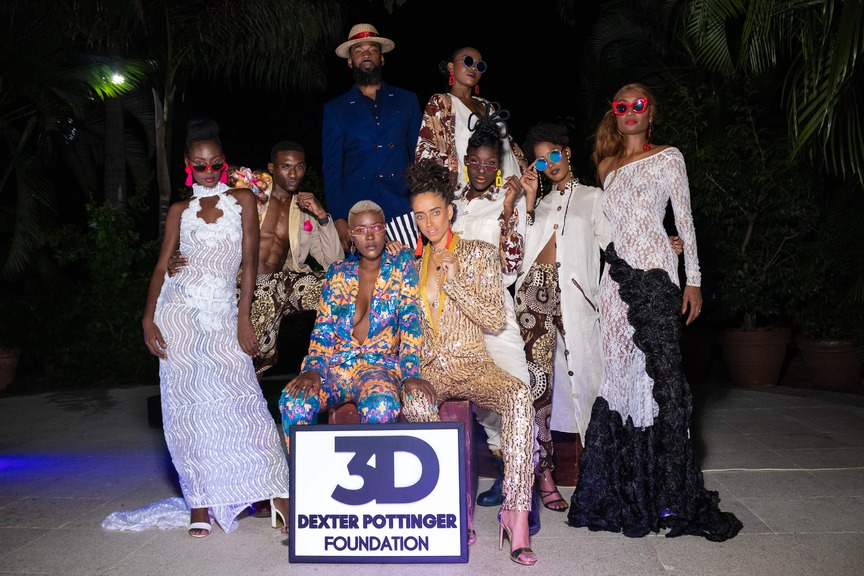 “Elevating creative youth through mentorship” is the credo of the charity, which aims to unearth and shape the next generation of creatives.

A release from the DPF beautifully surmised some of Pottinger’s best attributes.

“The distinguished spirit of Dexter Pottinger remains ever-present in the consciousness of those who knew him best. He was a fiercely loyal friend and confidant, whose aura brought light and clarity to those with quiet struggles. He exemplified the notion that beauty can be found and cultivated in the most unexpected places. And through his generosity of heart, artistically woven mind, and unapologetic approach to self-expression, Dexter became an unparalleled force in formerly unpaved landscapes.”

Mother of the late Dexter Pottinger Estrie Williams unveils the DPF brand logo. Scroll to the end to see the collection...

The release further highlighted the values of the organisation stating: "Iin addition to career and interpersonal development, the foundation intends to address topics like self-discovery, acceptance, and grief navigation - a plight to sustain the next generation of Dexter’s.”

’Tis, for this reason, the DPF plans to channel Pottinger’s know-hows and finesse in business to provide marginalised creative youth with the tools needed to take their ventures to the next level - primarily into successful businesses.

Board member and sister of the late designer, Ta-Shan Adams wishes to spread hope through the DPF. “We want to give people hope,” and teach them that despite their shortcomings “it’s possible to change your circumstances.”

She believes, with a bit more guidance, her brother would have been able to make significant career moves. “I can only imagine how much he would’ve been able to do if he had somewhere to go to get certain tools, whereas he did it trial and error.”

Recently, on Pottinger's birthday, a snazzy set of insiders gathered poolside at the Terra Nova All-Suite Hotel to launch the organisation in style.

Following cocktails and hors d’oeuvres from the Terra Nova All-Suite Hotel, media personality and emcee Debbie Bissoon led the welcome. She passed the baton to board member Duane Thomas for the introduction of the Dexter Pottinger Foundation board of directors and to detail the direction of the charity.

Thereafter, his fellow board member Donovan Fairweather read a tribute for Pottinger.

Before delivering a message from Culture Minister, Olivia ‘Babsy’ Grange, the Ministry of Culture, Gender, Entertainment, and Sport’s Cultural Policy and Monitoring Director, Marisa Benain expressed her admirations for Pottinger.

“Just as much as Dexter never had any training in dance, when he danced, you didn’t know…” she started. “Dexter had this innate spirit of ‘self-motivation’ and ‘self-encouragement’ and he wasn’t waiting on anybody to give him any permission for anything he did.”

Later, Benain read endorsements from the minister, stating: “Minister Grange is very happy and touched that [Dexter] has a team and a family that is going to ensure that his legacy lives on and that he is always remembered. She completely endorses the charity and lends her full support.”

The keynote was presented by fashion designer and Mission Catwalk executive producer, Keneea Linton-George, who regaled guests with memories she’d shared with Pottinger then left all inspired to contribute to the cause.

During a live drum session, Pottinger’s finale collection, Free was revealed. As scintillating and liberating as it was, patrons got an exclusive look at what would’ve been Pottinger’s next fashion endeavour.

Pottinger’s siblings Ta-Shan Adams and Danta Aarons thanked guests for showing out in their brother's honour. Indeed, love and conviviality found their way around The Pavillion.

For more information, to pledge, or to support the foundation, contact: