Slain cops were the only offspring for their parents - federation 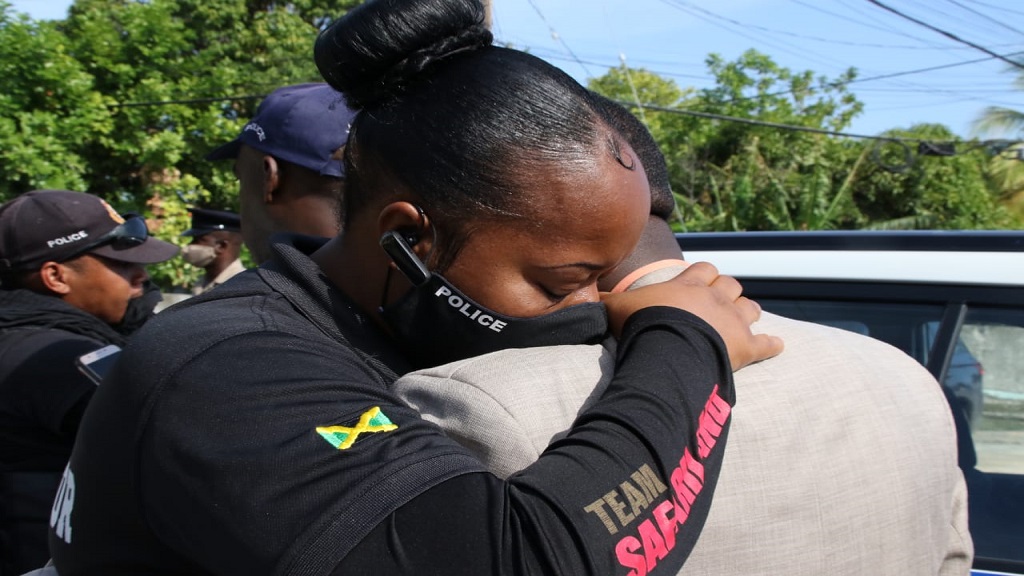 Colleagues in mourning at the scene of the fatal shooting of two policemen and the shooting and injury of two others in Horizon Park, St Catherine early on Friday morning.

Chairman of the Jamaica Police Federation, Detective Sergeant Patrae Rowe, has issued a call for Jamaicans to recognise and appreciate the great sacrifice that members of the police force and other law enforcement professionals are putting in to ensure the safety of all, and to do more to join in the fight against crime.

“Their sacrifice is much too great for us to forget them, and for Jamaica to overlook them,” said Rowe.

He made the comment just a day after four of this colleagues were shot - two fatally - in what has been described as a sad day for the Jamaica Constabulary Force (JCF).

“June 12, 2020 will go down as a most difficult day for us as a police force. Two young police officers were shot and killed by a criminal and enemy of the state,” said Rowe.

“Detective Corporal Biggs, a man I know for years and have worked with. Such an extraordinary young man. He is from South Manchester and is the only child for his mother,” noted Rowe.

”Constable Hylton, a young man from Linstead, St Catherine, was also the only child for his parents, and from all indications, he was a young and promising policeman,” added Rowe.

”Two young men, killed because they made a decision to make their country a better place,” mused Rowe.

The federation chairman said he shared the details about the slain policemen because oftentimes people lose sight of the fact that police officers are people, people with feelings and emotions, and with rights and family.

”These young men did nothing wrong, they did everything right. They joined a good cause, an organisation committed to doing right, to be a force for good,” stated Rowe.

“The duty is ours to ensure that their killing does not represent mere statistics. I, we, will not stop until their names are immortalised on a wall that is erected and committed to their memories,” said Rowe.

“Their day was yesterday. Mine and others may be tomorrow. What we do for them today will set the pace for what will be done for us tomorrow.

“We are not doing this for the honour, but what we are doing should never go without honour. Nobody gives their life for less than one million Jamaican dollars a year, hence this is not for money or fame. It is for service,” declared Rowe.

”I am a police officer and I am proud of it. Kill me for it and I will die proud of the cause I was committed to. To die in service is to die knowing that your efforts made something better,” proclaimed Rowe.

”To the families of Biggs and Hylton, accept our deepest and sincere condolences. To my colleagues, be strong; we got this; the fight continues,” urged Rowe.