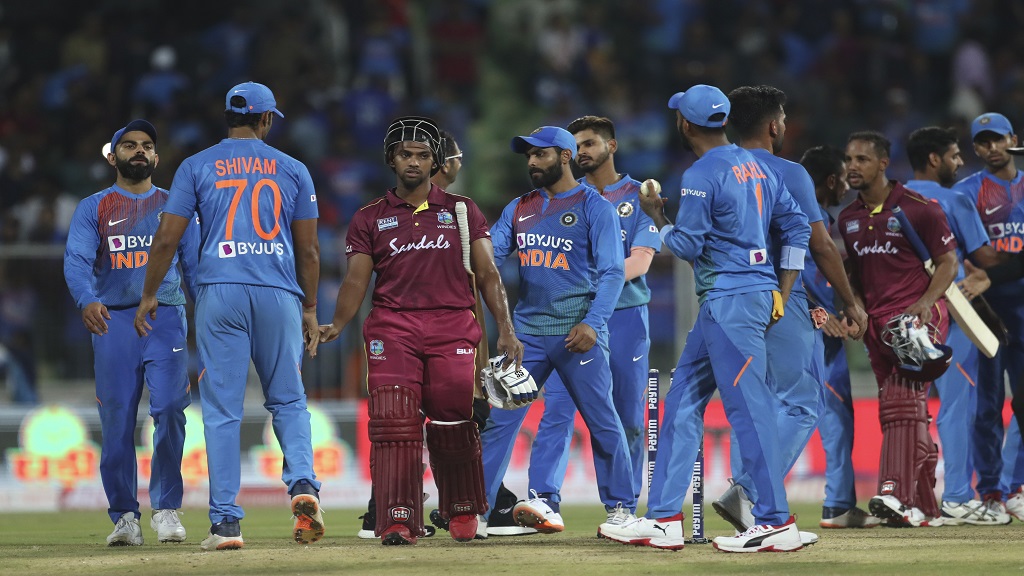 Lendl Simmons guided West Indies to an eight-wicket thumping of India in the second Twenty20 international in Thiruvananthapuram, setting up a series decider in Mumbai on Wednesday.

Simmons finished unbeaten on 67 from 45 balls, having received able support from Evin Lewis (40), Shimron Hetmyer (23) and the returning Nicholas Pooran (38 not out) as the Windies reached a target of 171 with nine deliveries unused.

Shivam Dube had earlier compiled a maiden half-century for the hosts, impressing with 54 from 30 balls after being surprisingly promoted to number three, yet Virat Kohli's men were ultimately overpowered as West Indies hit 12 sixes to India's five.

The tourists were 26 without loss after five overs, but they accelerated in devastating fashion thereafter to win with ease.

Simmons was the star turn, hitting four fours and as many sixes as he took full advantage of being dropped by Washington Sundar on six, while Pooran scored at a strike-rate of 211 on his comeback from a four-match ban for ball-tampering.

Lewis and Hetmyer also provided the necessary impetus to get the Windies ahead of the required rate, the latter thumping three maximums before falling victim to a stunning Virat Kohli catch at long-on, which saw India's captain take the ball on the run before contorting his body superbly to avoid touching the boundary rope.

India were left to rue Sundar putting down a routine chance off Bhuvneshwar Kumar to give Simmons an early life, though, and Lewis was also dropped on 17 by wicketkeeper Rishabh Pant.

Dube, who cleared the ropes four times, and Pant (33 not out) were the only home batsmen to make significant contributions to a score of 170-7, as the Windies' attack kept things relatively tight despite conceding a glut of extras.