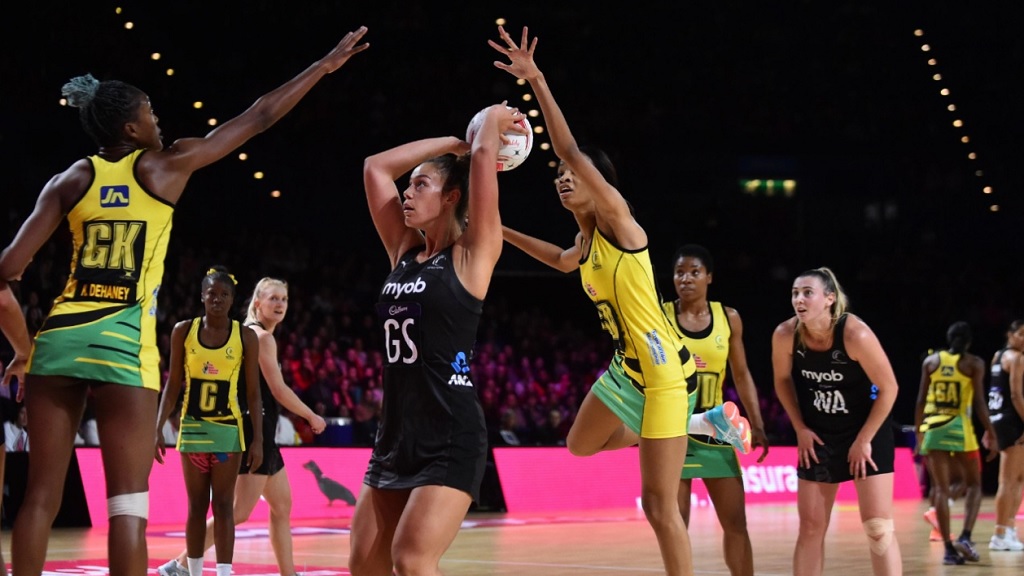 Action from the Vitality Nations Cup netball match between Jamaica and New Zealand in Birmingham, England on Wednesday.

The Ferns were dominant across the court with young goal shoot Maia Wilson impressing in the shooting circle converting 42 of her 45 attempts to lead her team into the final.

Te Paea Selby-Pickit supported well with 11 goals from 13 attempts and  Ameliaranne Ekenasio had 18 goals from 22 attempts.

New Zealand led by seven after the first quarter, 10 at half time and by 20 by three-quarter time.

Jhanielle Fowler scored 38 goals from 40 attempts at a rate of 94 percent but was unable to put a dent in the lead.

Shanice Beckford went seven of eight from the field for the Jamaicans.

The last time the sides met, the Ferns capped off a miserable 2018 Commonwealth Games on the Gold Coast, losing the bronze medal match 60-55 to the Sunshine Girls. That ultimately proved former coach Janine Southby's last game in charge, standing down several months later.

Jamaica also overcame the Ferns in two warm-up games prior to the Commonwealth Games on the North Shore, a horrible patch in the Ferns' proud history.

The Sunshine Girls, who beat South Africa 59-54 in their opening match last Sunday, will now take on England on Saturday.

New Zealand beat England 64-48 in their opening game. They will now meet South Africa on Saturday before squaring off in the final the following day in London.

Jamaica's Sunshine Girls end 2019 at No. 4 in netball world rankings