Signs of bomb found at site of deadly California explosion 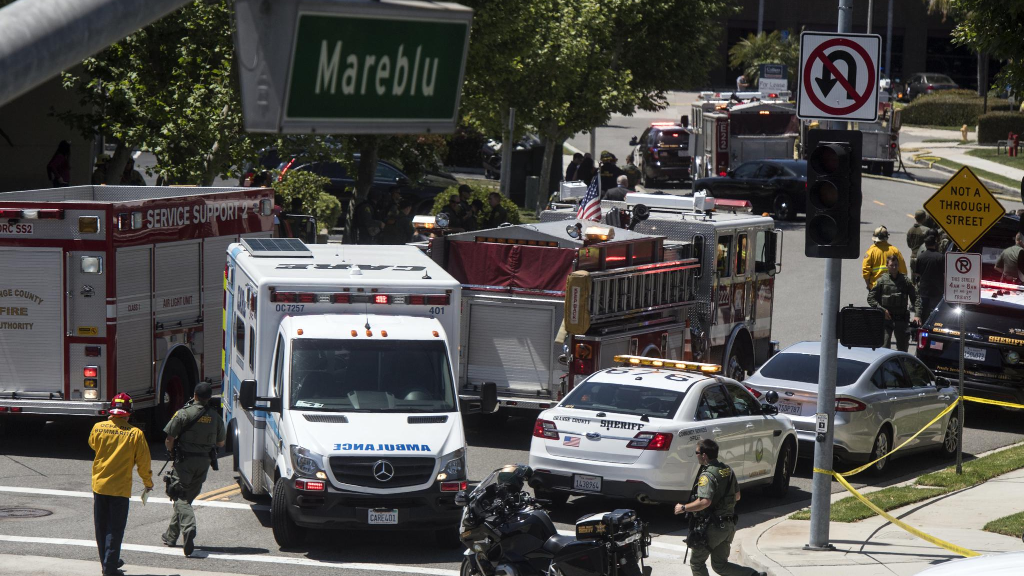 An explosion that ripped through a Southern California day spa killed the owner, and investigators Wednesday were looking into whether she was targeted in the crime.

Authorities declined to publicly say if they believed the spa owner was targeted, but one official briefed on the investigation told The Associated Press that she had been the intended recipient of an explosive package.

Remnants of an explosive device were found inside the badly damaged spa where the powerful explosion Tuesday afternoon shook the city of Aliso Viejo, about 50 miles (80.5 kilometers) south of Los Angeles, and tore a corner off the building that houses medical offices. Two patrons were seriously injured.

"We do not believe this was an accident," said Paul Delacourt, special agent in charge of the FBI's field office in Los Angeles. "Although the damage was extensive, there are some components that we have located at the scene of the explosion that are inconsistent with what one might expect to find at this business."

Investigators were working to determine a motive and figure out exactly how the device got to the spa, Delacourt said. No arrests were made.

The blast is believed to have been caused by a package sent to the spa, two officials told the AP. The spa owner was believed to be the target, one official said.

The officials were briefed on the investigation but not authorized to discuss the matter publicly and spoke to AP on condition of anonymity.

Formal identification of the body was continuing but authorities believe it was Ildiko Krajnyak (IL-di-koh KRY-nyak), a licensed cosmetologist, who owned the spa. Friends set up a fundraising campaign to cover her funeral costs and fly her son home from Seattle, where he attends college.

Krajnyak, 48, was originally from Hungary and had just visited there, according to her Facebook page and a neighbor. Her Facebook page showed photos from her home country, including a selfie outside the clinic where she trained to become an aesthetician 30 years ago.

Her Orange County business offered services such as facials, waxing and wrinkle treatments.

A voicemail recording at her business said the spa was closed through Monday and would reopen Tuesday, the day of the blast.

Irene White, a friend, read a statement Wednesday on behalf of Krajnyak's family, calling her death "a complete shock." The family asked for privacy as they mourn "a mother, a wife, a daughter and a friend." She said the family is cooperating with investigators.

The two customers injured underwent surgery Wednesday and were expected to survive. A third victim was treated for smoke inhalation.

Search warrants were served at the business and two other locations, including the Long Beach house of a man whose Facebook page features several photos with Krajnyak in Mexico, Canada and Portugal.

A neighbor there who would only give her first name as Tiffany said Krajnyak lived there with her estranged husband and mother, whom she cared for.

The couple, although separated, continued to live under the same roof, the neighbor said. Court records show they had filed jointly for bankruptcy in 2014 and the case was dismissed and closed Monday.

Attorney Andrew Bisom, who represented Krajnyak and Ronilo Vestil during the Chapter 13 bankruptcy proceedings, said they were far along on their mandated payment plan but hadn't completed it.

Bisom did not know them well and said there was nothing that stood out about them or their case.

The two-story building where the explosion had blown siding off the walls and shattered windows was closed Wednesday as bomb technicians and investigators from the Orange County Sheriff's Department, the FBI and the Bureau of Alcohol, Tobacco, Firearms and Explosives sifted through debris.

Pieces of the explosive device recovered were sent to the FBI's laboratory in Quantico, Virginia, to be analyzed, Delacourt said.

The Latest: Official: Explosion being probed as intentional