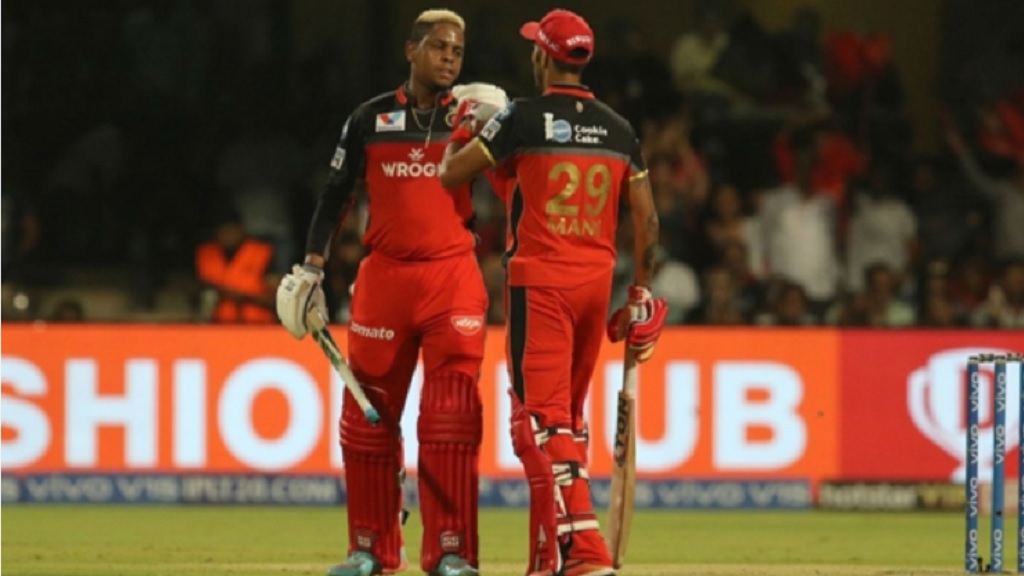 The defeat leaves Sunrisers Hyderabad in danger of missing out on the final IPL play-off spot.

Victory in their last match of the regular season would have all-but secured fourth spot for Sunrisers, but RCB did Kolkata Knight Riders a huge favour and gave themselves hope of avoiding the wooden spoon.

Kane Williamson top scored with an unbeaten 70 off 43 balls after Washington Sundar (3-24) had done damage as Sunrisers posted 175-7.

Williamson had been dropped on 20 and it looked set to be Sunrisers' day when they reduced RCB to 20-3, Bhuvneshwar Kumar striking twice and Khaleel Ahmed dismissing Virat Kohli.

Hetmyer and  Gurkeerat Singh Mann had other ideas, putting on 144 for the fourth wicket with some big hitting to knock the stuffing out of Williamson's side.

Hetmyer (75 off 47) was dropped twice in as many balls after bringing up his maiden IPL half-century, while Gurkeerat (65 from 48) played his shots at the other end before they both fell with victory in sight.

Umesh Yadav struck the first and second balls of the final over through the off side for four to win it, leaving Sunrisers needing Mumbai Indians to beat KKR on Sunday to make the last four.

An opening stand of 46 from only 4.3 overs between Wriddhiman Saha (20) and Martin Guptill (30) got the Sunrisers off to a strong start after Kohli put them in.

Sundar removed Guptill, the in-form Manish Pandey and Vijay Shankar as the Sunrisers lost their way, but captain Williamson finished with a flourish to give them the momentum after being dropped by Kulwant Khejroliya on 20.

The skipper struck Umesh for two sixes and as many fours in a final over of the innings that cost 28 runs.

Bhuvneshwar and Khaleel Ahmed had RCB in all sorts of trouble at 20-3 inside three overs.

Parthiv Patel fell without scoring when he top-edged Bhuvneshwar to Pandey at backward point and Kohli edged Khaleel behind for 16 before AB de Villiers departed for only one.

HETMYER AND GURKEERAT TO THE RESCUE

Hetmyer came to the crease having scored only 15 runs in four innings for RCB, but it was a case of better late than never for the left-hander from Guyana.

He attacked Rashid Khan and struck six sixes in a brutal knock, with Gurkeerat clearing the ropes once and hitting another eight boundaries.

Pandey and Yusuf Pathan failed to hang on to catches in consecutive balls as Hetmyer offered chances and when he did depart it came too late in the day.

The nerves jangled when RCB lost three wickets for four runs, but they only needed six off the last over and Umesh made amends for his poor final over by hitting the winnings runs.