Shelly gives Waterhouse kids Christmas she ‘never had as a child' 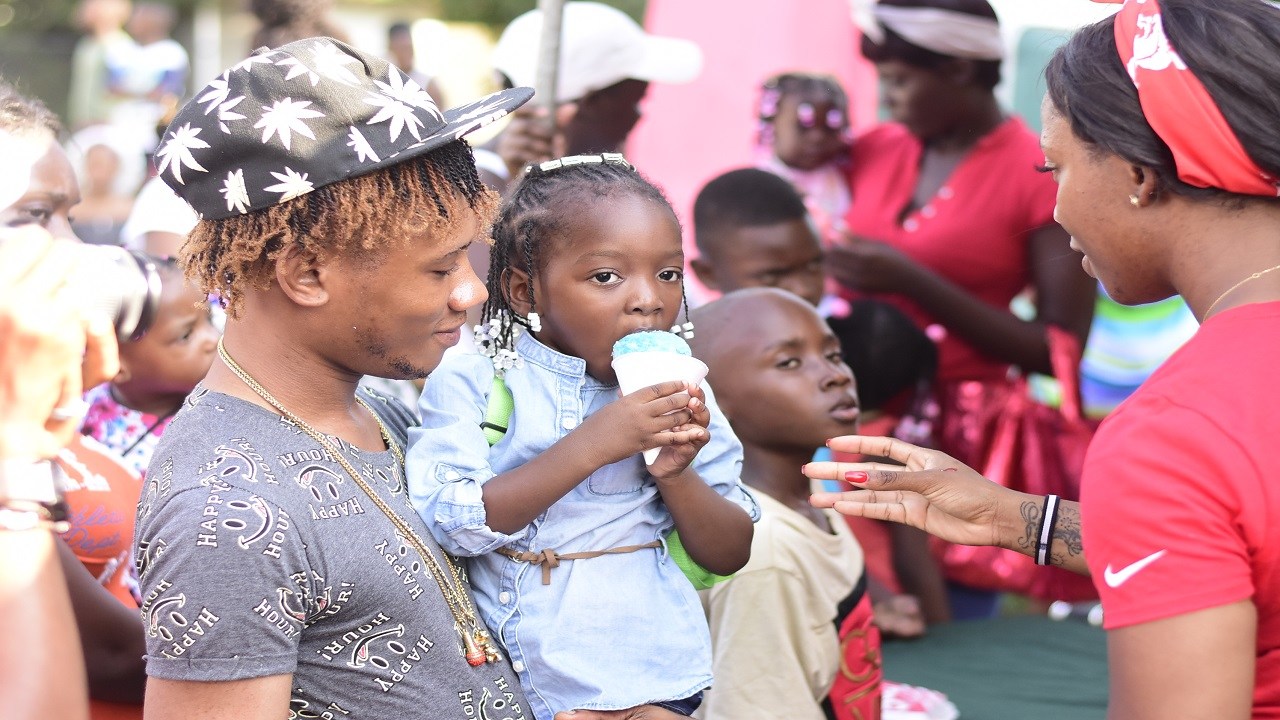 A young girl sucks on a snow cone as her delighted father and Olympian Shelly-Ann Fraser Pryce look on. (PHOTOS: Marlon Reid)

Olympic Games and World Championships gold medallist, Shelly-Ann Fraser-Pryce and her Pocket Rocket Foundation, went to her hometown of Waterhouse in St Andrew on Boxing Day and kept the children festive for most of the day, with fun activities during her annual Christmas Treat.

While the activities were geared toward the children, their parents and the wider community lingered around the site, listening to the music and also helping to ensure the safety of the event, which attracted toddlers to teenagers in the hundreds.

Among the fun activities were various types of rides, bounce-a-bout and a snow simulator, which proved to be a hit. The children were also feted with hot dogs, ice cream, drinks and snow cones that brought smiles to their faces. 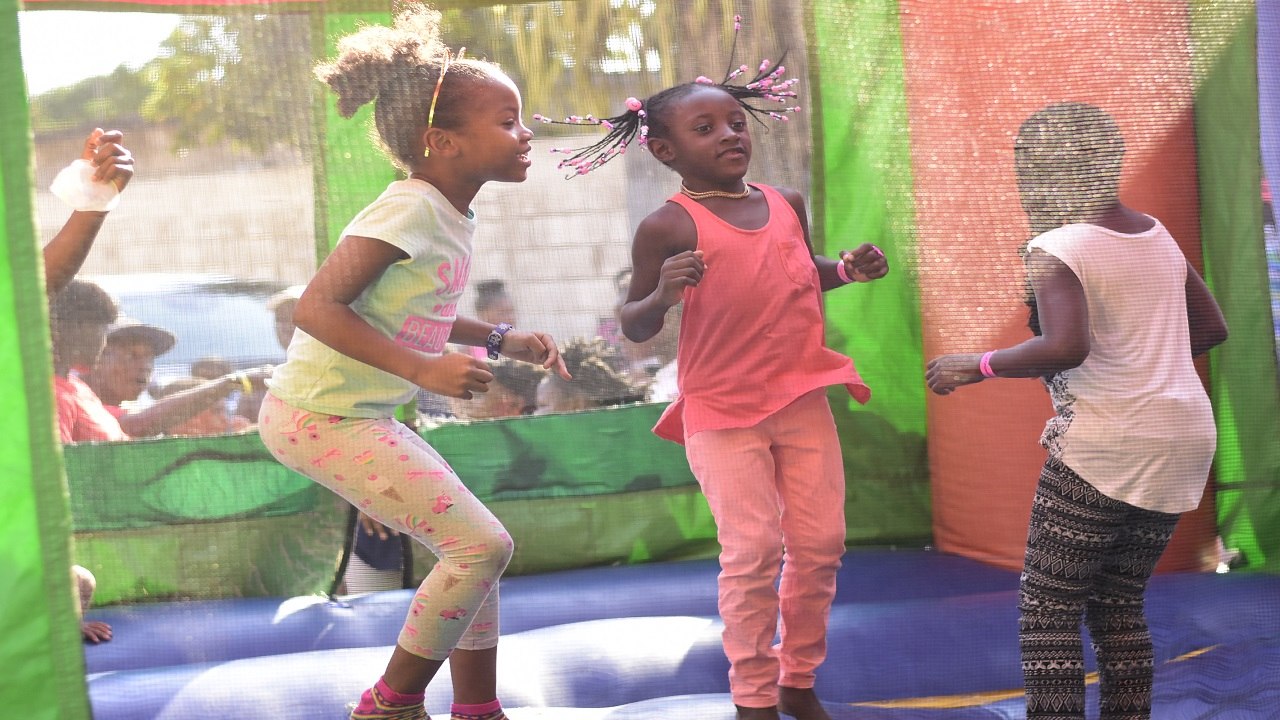 The process was led by Fraser-Pryce and she engaged all throughout the day, at times handing out presents, or giving out food delights from her many sponsors, who joined her to bring cheer to a community that straddles the poverty boundary.

According to Fraser-Pryce, in an interview with Loop News reporter Job Nelson, she does this every year so that children in the community can get at least one opportunity to be merry during the holidays, which she said she didn’t have as a child.

She said, "this is basically my Christmas. Growing up, I never really had a Christmas. It was just usually the normal of waking up Christmas morning, eating and going about my business. But I was finally able to give these children something to look forward to with the help of sponsors.

"It's a good feeling to see the kids enjoy the day and to share it with them. It is also a pre-birthday gift for me as my birthday is tomorrow (December 27)," Fraser-Pryce said. 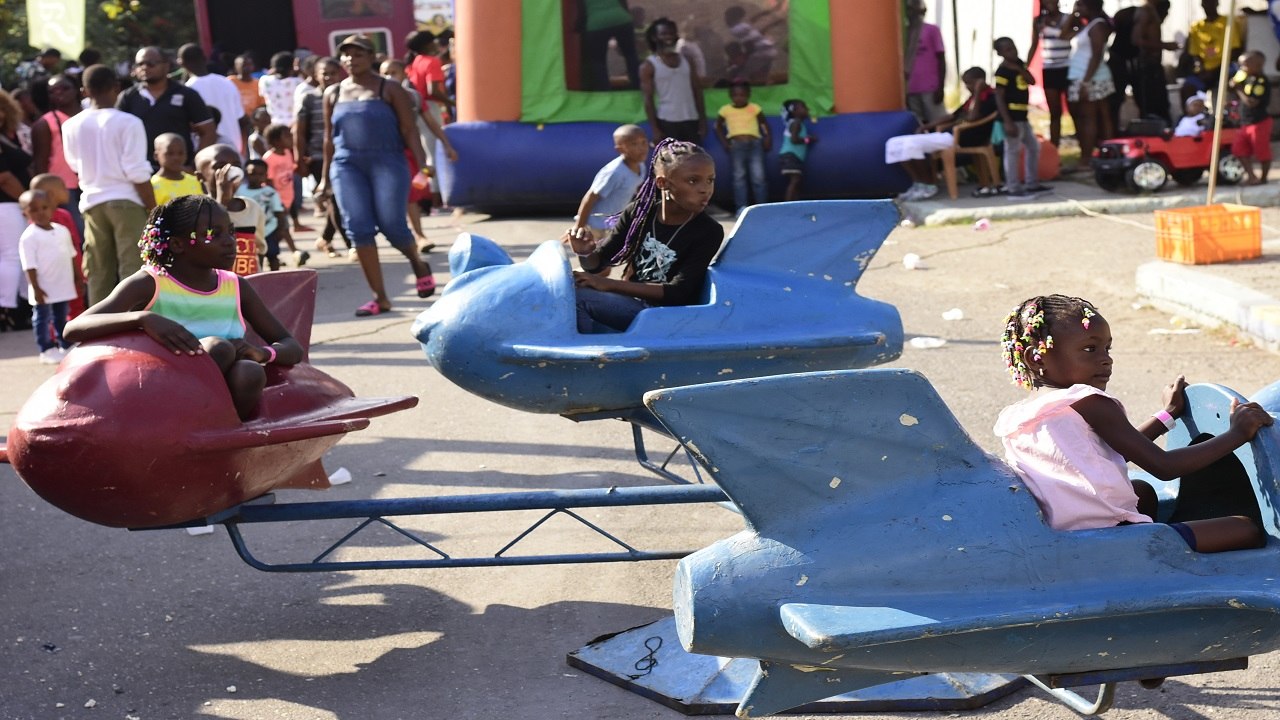 She asked corporate Jamaica for more support for the event, as she said that although giving out over 400 gifts to the children, the venture still came up short in that regard, as there were many who didn't get presents.

Corporate entities Digicel and GraceKennedy, both long-time sponsors of Fraser-Pryce, contributed to the success of the treat.

Digicel Jamaica's Marketing Manager, Monique McLeod said, "Digicel has been with Shelly a long time and it was so good when she decided to do a treat every Boxing Day; it was only natural that we came onboard to support a wonderful venture in giving back to our children, as every child should have a great Christmas.

"It means the world to them as they are having so much fun from seeing their faces. They are so excited about going on the rides and bounce-a-bout, dancing and just having a whale of a time," McLeod said.

Promotional and events coordinator at Grace, Marlon Walker said, "it is something that we believe in and we really appreciate Shelly inviting us every year. When you look on the children and see the smiles on their faces, that's what it is all about.

"It is giving back to these children and letting them know that you can be anything that you want to be, so just enjoy yourself today and work hard at your future. So Grace is all about building the next generation of Jamaicans," Walker said.

See more photos in slider below.