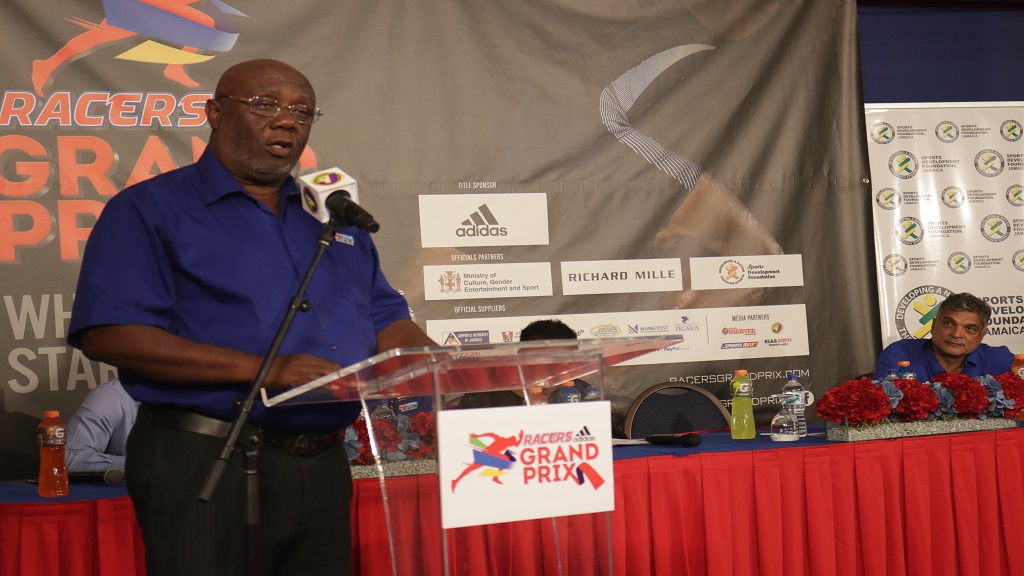 Glen Mills, president of Racers Track Club, makes his address during the launch of the fourth staging of the Racers Grand Prix at the Jamaica Pegasus on May 9, 2019. (PHOTOS: Shawn Barnes).

Olympic champions Shaunae Miller-Uibo and Kirani James are among the international athletes confirmed for the fourth staging of the Racers Grand Prix on Saturday, June 8 at the National Stadium in Kingston.

This was revealed by president of Racers Track Club Glen Mills on Thursday at the Jamaica Pegasus during the media launch.

Miller-Uibo of the Bahamas and James of Grenada will both target a second straight victory at the meet.

The 25-year-old Miller-Uibo is the world's leading 400m runner. In an undefeated 2018 season across all distances, the Bahamian clocked a lifetime best of 48.97 to move to 10th on the world all-time list. She started her 2019 campaign with a bang, recording 49.05 in her opening 400m race of the season.

Miller-Uibo scored a runaway victory in the women’s 200m in 22.11 seconds at last year’s staging of the Racers Grand Prix. This year, Miller-Uibo will compete in the 400m, the event where she won a dramatic gold medal at the 2016 Rio Olympics.

In a thrilling finish in Rio, Miller-Uibo stumbled and then dived across the line as she edged out American world champion Allyson Felix to win in 49.44 seconds.

Interestingly, Miller-Uibo will face off with American Phyllis Francis, who scored a shock victory over the 6-foot-1 inch Bahamian and Felix over the distance at the 2017 IAAF World Championships in Rio.

Christine Day and Chrisann Gordon are the Jamaicans confirmed for the event.

James, a 400m gold and silver medalist at the last two Olympics, will compete in the men’s 400m where he will have a big rematch with American Fred Kerley.

At last year’s staging, James - who was running for the first time in a year due to illness - came from off the pace to catch Kerley on the line to win in 44.35 to beat the previous meet record of 44.37 set in 2016 by Trinidadian Cedenio Machel.

Mills also announced that five runners, including defending champion and two-time Olympic 100m champion Shelly-Ann Fraser-Pryce, have been confirmed for the women’s 100m.

“Racers Grand Prix has Shelly compete every year, and she has never lost a race there,” said Mills.

“Asafa is going all out to run 100 sub-10, and I am encouraging everybody to come out and cheer him along,” said Mills.

“He will be accompanied by Zharnel Hughes, Nesta Carter, and Kemar Bailey-Cole,” Mills further stated.

Other Jamaicans confirmed for the meet are  2018 Diamond League winner in the discus, Fedrick Dacres, and 400m  phenomenon Akeem Bloomfield, who signed a professional contract with Puma last year.

The 2019 Racers Grand Prix will feature 130 athletes from 15 countries competing in 19 events.