Sharapova back in Oz, joins Federer, Djokovic in 2nd round 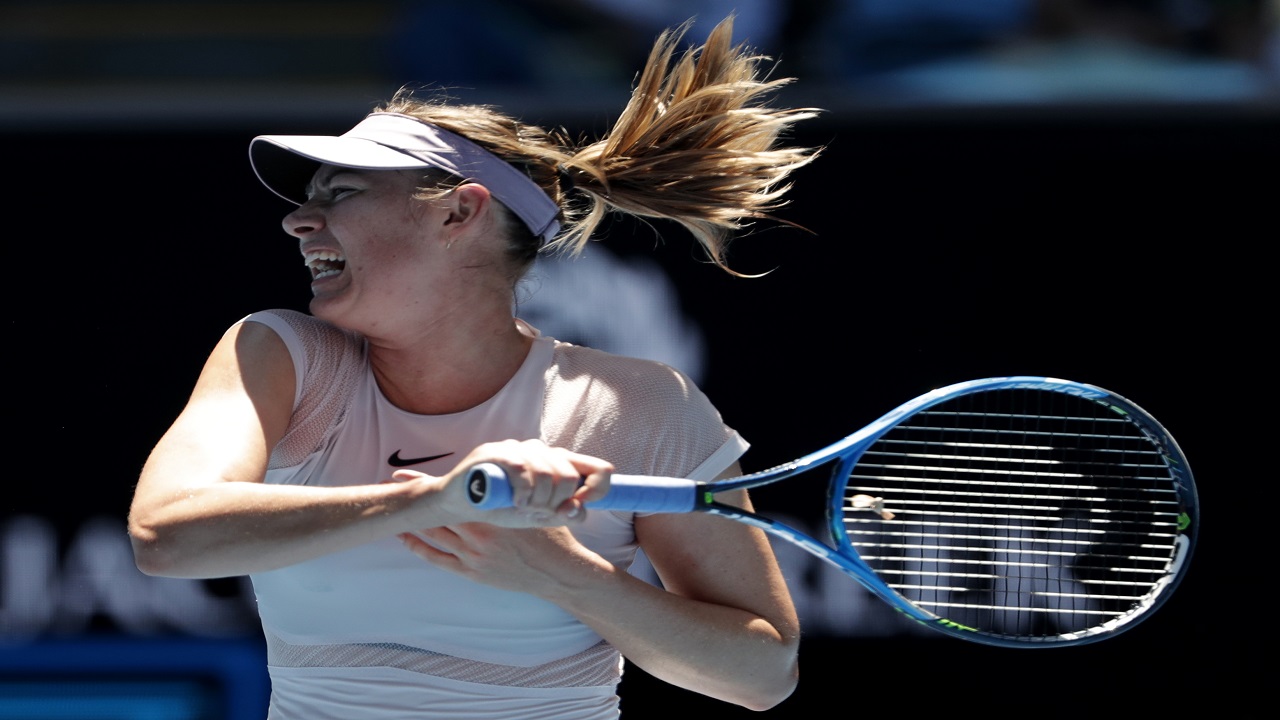 Russia's Maria Sharapova follows through on a shot to Germany's Tatjana Maria during their first round match at the Australian Open tennis championships in Melbourne, Australia, Tuesday, Jan. 16, 2018.

It wasn't Maria Sharapova's choice to miss the last Australian Open. That decision was taken out of her hands because of a doping ban following a failed test on her previous visit to Melbourne Park.

The five-time major champion said it was her choice to return, though, and she relished every moment of it in Tuesday's 6-1, 6-4 victory over Tatjana Maria.

"With that choice I know that I face difficulties and challenges on the court, and that I start from no ranking and that I might start on some outside courts, and I understand that and that's part of the process," said Sharapova, who was a contentious choice to represent the women's champions last week at the official draw.

She was banned for 15 months after testing positive for meldonium, not long after the medication was added to the list of banned substances, when she was in Australia in 2016.

So when Serena Williams won the 2017 Australian Open, Sharapova was sick in bed and watching on TV.

She returned in April and, because of her slide down the rankings, needed some wild-card entries to enter tournaments. She made her return to the majors at the U.S. Open, and finished the year ranked No. 60.

"I learned what it feels like to be on the ground and seeing life from the ground, and I'm not shying away from any part of that," she said. "I love what I do. I'm a competitor and that's why I continue to do it."

There were all kinds of comebacks on Tuesday. Six-time Australian Open champion Novak Djokovic and 2014 winner Stan Wawrinka returned from injuries that had sidelined them since Wimbledon, top-ranked Simona Halep recovered from 5-2 down in her first set and a tumble in the second, and 2016 champion Angelique Kerber continued her amazing return to form.

Defending champion Roger Federer just picked up where he left off, beating Aljaz Bedene 6-3, 6-4, 6-3 in a night match, his first on Rod Laver Arena since clinching a career-reviving title in Melbourne last year.

The 19-time major champion has been met on court after previous wins by tennis greats Laver, John McEnroe and Jim Courier.

On Tuesday night, he got something different. Comedian Will Ferrell stepped out of the crowd and, slipping into character as Ron Burgundy, conducted the post-match interview.

Djokovic tweaked his service motion while recovering from an injured right elbow, and used it to good effect in a 6-1, 6-2, 6-4 win over Donald Young.

Djokovic lost in the second round last year, but won five of the previous six Australian Open titles. This time, he has four-time champion Andre Agassi in his corner.

"Obviously I wanted to start with the right intensity, which I have," Djokovic said. "I played perfect tennis, like I never stopped."

Madison Keys reversed a trend, becoming the only one of the four American women who contested the U.S. Open semifinals four months ago to reach the second round in Australia.

The 17th-seeded Keys, the U.S. Open runner-up, advanced with a 6-1, 7-5 win over Wang Qiang and will be one of four American women who made it through the opening two days.

Former No. 1-ranked Kerber, the 2016 Australian Open champion, continued her resurgent run with a 6-0, 6-4 victory over Anna-Lena Friedsam to extend her streak to 10 consecutive wins.

Two-time Wimbledon champion Petra Kvitova lost 6-3, 4-6, 10-8 to Andrea Petkovic. She missed the Australian Open last year while recovering from a knife attack that easily could have derailed her career.

Sharapova's long absence from the tour means she isn't seeded in Melbourne, but that doesn't bother her.

"It's been a couple of years since I've been back here — obviously I wanted to enjoy the moment," Sharapova said after closing her win over Maria with an ace, then blowing kisses to the crowd.

Sharapova will next play 14th-seeded Anastasija Sevastova, who beat her at last year's U.S. Open.

That loss was part of the process that Sharapova believes has set her up for this season.

"I felt like I have got a lot of things out of the way physically and emotionally and mentally last year," she said. "There was a lot of firsts again for me, playing the first tournament, first Grand Slam, and just different feelings and what it would be routinely. ... But it felt pretty routine today."

Sharapova misses out on French Wild Card after doping