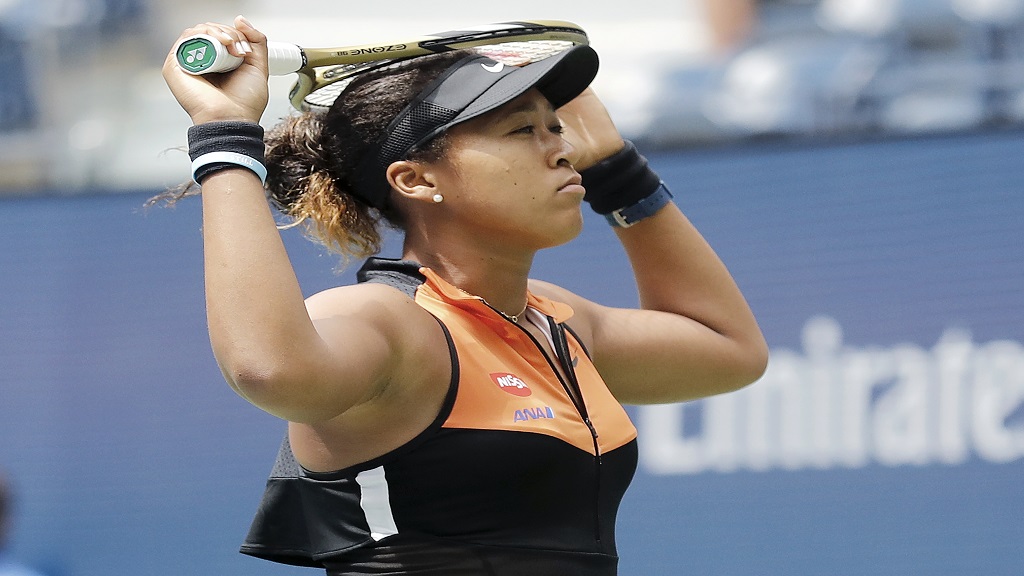 Naomi Osaka, of Japan, reacts after losing a point to Anna Blinkova, of Russia, during the first round of the US Open tennis tournament Tuesday, Aug. 27, 2019, in New York. (AP Photo/Michael Owens).

Naomi Osaka put her right hand in the shape of a gun and pointed two fingers at her temple, her face grim as she looked toward her guest box.

She'd just dropped the second set, moments after wasting a match point, as her U.S. Open title defense got off to a shaky start Tuesday. Her body language told the story: the eye rolls, the balled up fists covering her face at a changeover, the racket resting atop her head.

Back in Arthur Ashe Stadium, where she beat Serena Williams in last year's chaotic final, the No. 1-seeded Osaka kept digging holes and kept climbing out of them, eventually emerging with a 6-4, 6-7 (5), 6-2 victory over 84th-ranked Anna Blinkova of Russia in the first round.

"I don't think I've ever been this nervous in my life," Osaka told the crowd during her post-match interview. "For me, I just came off really slow and I never really found my rhythm."

The 21-year-old from Japan wore a black sleeve over her left knee, which has been an issue recently.

But it wasn't so much her movement as her erratic strokes that presented problems for Osaka, who finished with 50 unforced errors, more than double Blinkova's total of 22.

"You kind of want to do well after you did well last year," Osaka said, when asked why she felt so many jitters while trailing 3-0 and 4-1 at the outset.

"Just definitely," she said, "didn't want to lose in the first round."

Only two U.S. Open women's champions have lost in the first round the following year during the professional era: It happened in 2005 to Svetlana Kuznetsova and again in 2017 to Angelique Kerber — who was beaten by none other than Osaka, ranked 45th at the time and yet to get past the third round at a major tournament.

Look at her now, though. This victory Tuesday, difficult as it was, stretched Osaka's winning streak in hard-court Grand Slam matches to 15, which includes her run to the titles at Flushing Meadows in 2018 and at the Australian Open in January.

Those helped her become the first Japanese tennis player to be ranked No. 1, a spot she regained this month.

In other early results on Day 2 at the U.S. Open, two-time major champion Garbine Muguruza was eliminated by Alison Riske of the U.S. 2-6, 6-1, 6-3, while two-time Wimbledon winner Petra Kvitova and No. 13 seed Belinda Bencic both won in straight sets.

Those in later action include 15-year-old American Coco Gauff, who surprisingly reached the fourth round at Wimbledon in July.