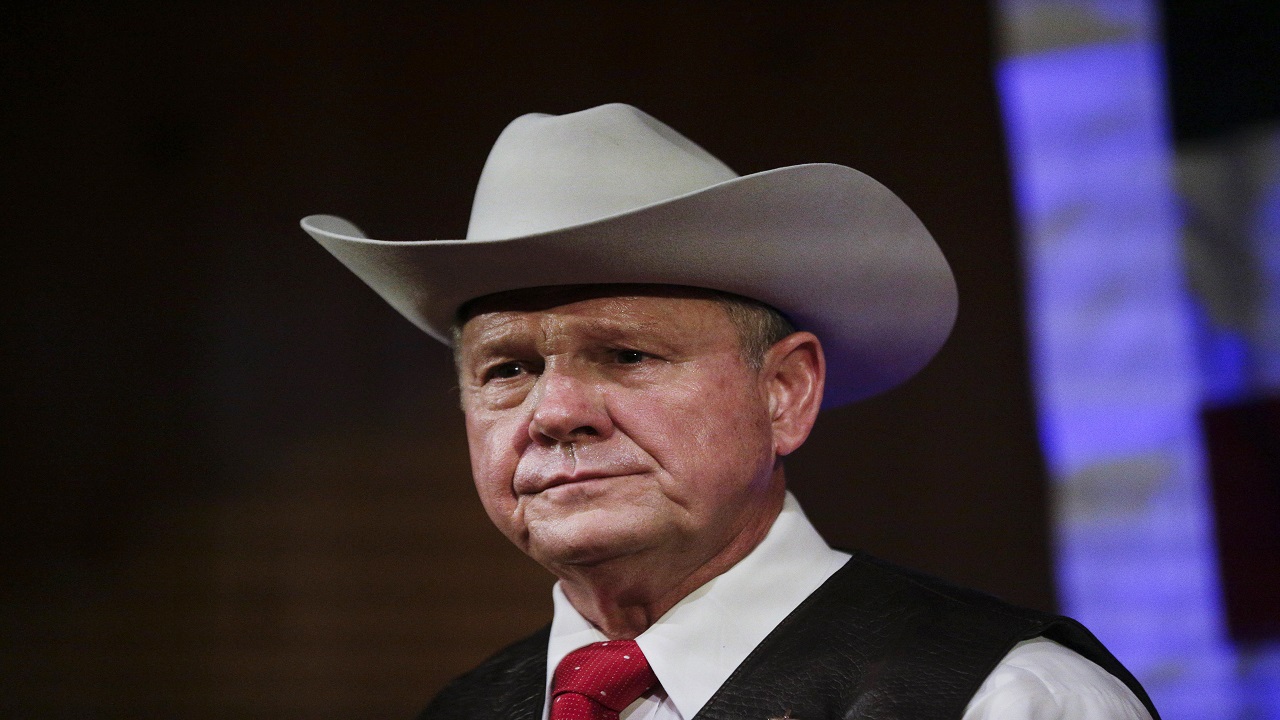 In this Monday, Sept. 25, 2017, file photo, former Alabama Chief Justice and U.S. Senate candidate Roy Moore speaks at a rally, in Fairhope, Ala. According to a Washington Post story Nov. 9, an Alabama woman said Moore made inappropriate advances and had sexual contact with her when she was 14.

Republicans weren't supposed to have to worry about Alabama.

Yet in the span of a tumultuous afternoon, a low-profile special election became a Republican nightmare that threatens a once-safe Senate seat — and offers a new window into ugly divisions that continue to plague the GOP in the age of President Donald Trump.

The revelations, a month before the Dec. 12 special election, triggered a sharp backlash from would-be Republican colleagues on Capitol Hill, who called on Moore to quit the race if the allegations were true.

But on the ground in Alabama, local Republicans showed little sign of turning their backs on Moore. Some lashed out at his alleged victims.

"If they believe this man is predatory, they are guilty of allowing him to exist for 40 years. I think someone should prosecute and go after them. You can't be a victim 40 years later, in my opinion," state Rep. Ed Henry told The Cullman Times.

"It's mudslinging at its best," said one of Moore's neighbors, 45-year-old Chris Hopper of Altoona, Ala. He added, "Why not vote for somebody that's got good Christian values?"

In Washington, however, the controversy marked a bittersweet moment for some in the Republican establishment who argued that Moore, a Christian culture warrior twice removed from his state's Supreme Court for judicial misconduct, never should have been the party's Senate nominee in the first place.

Some blamed Steve Bannon, Trump's former senior strategist, who broke from most GOP leaders — including Trump himself — by cheering Moore's candidacy earlier in the year.

Moore is the latest soldier in Bannon's self-described war on the Republican establishment. Frustrated that GOP leaders haven't quickly executed Trump's agenda, Bannon has vowed to defeat every Senate Republican up for re-election next year, save for Texas Sen. Ted Cruz.

Bannon referenced Moore only briefly during an appearance Thursday night in New Hampshire, attacking The Washington Post — an "apparatus of the Democratic Party," he called it — for also being among the first to report the "Access Hollywood" tape that caught Trump using sexual predatory language before the 2016 election.

The White House said Trump believes Republican Senate candidate Roy Moore "will do the right thing and step aside" if sexual misconduct allegations against him are true. Press secretary Sarah Huckabee Sanders told reporters traveling with Trump in Asia that the president believes a "mere allegation" — especially one from many years ago — shouldn't be allowed to destroy a person's life.

But Sanders said: "The president also believes that if these allegations are true, Judge Moore will do the right thing and step aside."

Moore's challenge in Alabama comes the same week that Republicans suffered sweeping election losses across several states, none more significant than Virginia, where Democrats seized the governor's office and may have changed the balance of power in the state legislature.

Across Washington, the calls from anxious Republicans for Moore to step aside if the allegations proved true grew as the hours passed on Thursday. They included Trump, McConnell and Cruz, House Freedom Caucus Chairman Rep. Mark Meadows, R-N.C., and Alabama's own senior senator, Richard Shelby.

Moore showed no signs of going quietly, vowing in a fundraising message distributed in the midst of Thursday's chaos to "NEVER GIVE UP the fight!" as he cast his struggle as a "spiritual battle."

It's too late for Moore's name to be removed from the ballot before the Dec. 12 special election even if he withdraws from the race, according to John Bennett, a spokesman for the Alabama secretary of state. A write-in campaign remains possible, Bennett added.

"Well, that's getting the cart ahead of the horse. But I will have something to say about that. Let me do some more research," Strange told The Associated Press.

In Alabama, however, many responded with a collective shrug.

"Take Joseph and Mary. Mary was a teenager and Joseph was an adult carpenter. They became parents of Jesus," Alabama state Auditor Jim Ziegler told The Washington Examiner.

Alabama resident Becky Ashley dismissed the situation as a ploy by Democratic candidate Doug Jones, a former U.S. attorney. "I don't believe them at all," Ashley told the AP. "I believe this is Doug Jones, some of his doings, you know. I just don't believe Roy Moore would do that."

The disbelief stemmed, in part, from Moore's reputation as a conservative Christian.

He was twice removed from his state Supreme Court position, once for disobeying a federal court order to remove a 5,200-pound granite Ten Commandments monument from the lobby of the state judicial building, and later for urging state probate judges to defy the U.S. Supreme Court decision that legalized gay marriage.

He said more recently that Rep. Keith Ellison, D-Minn., should not be allowed to serve in Congress because he's a Muslim. Asked about those comments during a Washington visit last week, Moore said only, "I'll address that later."

The Post reported that Moore, then a 32-year-old district attorney, approached 14-year-old Leigh Corfman in early 1979 outside a courtroom in Etowah County, Alabama.

After phone calls and meetings, he drove her to his home some days later and kissed her, the Post quotes Corfman as saying. On a second visit, he took off her shirt and pants and removed his clothes except for his underwear before touching her over her bra and underpants, Corfman told the Post. He also guided her hand to touch him over his underwear, she said.

"I wanted it over with — I wanted out," she told the Post. "Please just get this over with. Whatever this is, just get it over."

Three other women interviewed by the Post said Moore approached them when they were between the ages of 16 and 18 and he was in his early 30s. All four women spoke on the record to the Post.

Jones, Moore's Democratic opponent, released only an eight-word statement from his campaign: "Roy Moore needs to answer these serious charges."

Ashley Judd says a 'deal' helped her flee from Weinstein